I Was A Spy by Marthe McKenna

I picked this up after the New York Times ran a belated obituary for Marthe McKenna in September, 2018. This book reads like a non-stop adventure novel. McKenna (nee Cnockaert) was in her early twenties and studying to be a doctor when the war broke out. The Germans overran her native Belgium before their progress was halted and the front-line trenches formed just past her hometown of Westrozebeke. Her town was destroyed and she and her mother were forced to move a little further behind the lines to Roulers, where the Germans had set up a hospital. 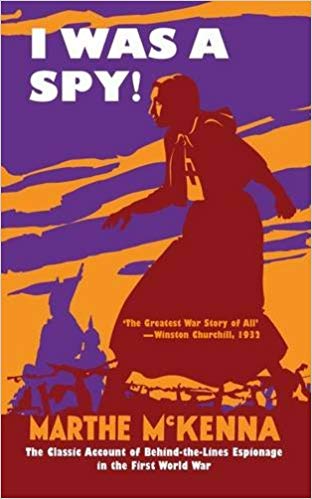 Cnockaert volunteered as a nurse at the hospital, where she treated both German and Allied soldiers. If you’ve ever read accounts from other WWI nurses, you know what a horror that job was. Around the time she moved to Roulers, her aunt, an independent and free-spirited loner, recruited her as a spy for the British Secret Service.

Cnockaert was able to gather quite a bit of information from the German officers billeted in her house. (Every house in Roulers was forced to board German soldiers during the war.) Because Cnockaert worked at the hospital and had to be on call at all times, she was one of the only citizens in town who carried a pass that allowed to violate the German curfew. Her pass allowed her to go anywhere at any time, while her dedicated and extraordinary work at the hospital kept her above suspicion of the German authorities. (Because of her medical training, she was more skilled than the other nurses, and her personality made her a favorite of doctors, patients, and hospital administrators alike.)

Cnockaert recounts a number of fascinating missions, in many of which her life was on the line at every moment. In one of her first missions, she sweet-talks the German officer who runs the railway station, trying to extract information from him about when a munitions train will arrive. She gets the information, in a very clever manner, and as she does so, she comes to recognize the German officer who she has just swindled as a fundamentally decent man forced by his country to do job he may not necessarily like. With deeply mixed feelings, she passes her information on to the British, knowing it will lead to the violent death of the man who has just helped her. Two days later, she watches British planes bomb the munitions train, blowing up not only the train but the entire station, with the German officer inside.

Cnockaert passes on other valuable information to the British, including information about a previously unknown German submarine base, a behind-the-lines telephone from which an unfaithful Brit has been passing secrets to the Germans, and most importantly, plans for the large-scale bombing of London that, thanks to her warning, the British were able to thwart.

Her greatest regret comes from an incident whose significance neither she nor the British understood at the time. She reported that a munitions train had arrived in Roulers carrying large cylinders unlike any she’d ever seen before, and that she had gathered from the talk of local soldiers these were bound for the front lines. The Brits replied that they wanted information about troop movements, and they were not interested in cylinders.

Cnockaert continued to investigate the cylinders, and she also reported that two unusual German officers were now billeted in her house. They spent their days studying weather reports, measuring windspeed and making maps. The Brits again replied they weren’t interested in such information, but she continued to search for details, because the constant chatter of the German soldiers about an imminent turning point in the war told her something big was about to happen.

The last things she reported before that Germans carried those mysterious cylinders to the line was that the officers billeted in her house were not standard army officers. They were university professors who taught chemistry. She also mentioned overhearing a soldier who had unloaded the munitions train saying the canisters contained chlorine. Again, the Brits were not interested. No one understood at the time what was afoot.

The first chemical attack of war came just after her final report, and Cnockaert was the head nurse at the hospital that received the first hordes of choking, chemically burned soldiers. Although the townspeople were used to the sight of soldiers arriving with their arms and legs blown off, even parts of their faces missing, the sight of the gassed, burned and choking soldiers so horrified them that for the first time, they rose up in open protest against the Germans.

This is just one of number of incidents the author recounts. There are many more, and many of them are more harrowing because the author is so bold and forward in her attempts to extract information from the Germans. In many cases, she’s the only Belgian in a room full of male enemy soldiers. And in many cases, she travels great distances on foot, in the dark of night, to distant towns and country farmhouses, avoiding German patrols again and again, while knowing she has to show up at work the next morning looking fresh and clean or she’ll blow her cover.

One of the more striking aspects of this book is the portrait it paints of a long-lost world. Although the Europeans were fighting a twentieth-century war with twentieth-century weapons, they were still living in a nineteenth century culture. Cnockaert, a farm girl, speaks fluent Flemish, French, German, and English. The German officers, while overrunning her country, are unfailingly polite to her, just as she is to them. German and Allied soldiers are treated side-by-side in the hospital. The savage war is playing out in a society that is far more civil than American society is today. In reading of these people who so easily shifted their conversation into another language to accommodate the person they were talking to, I felt a pang of loss for a civilization that once prized cultural knowledge and now scorns it. (America, that is.)

Another striking aspect of the book is how intimately the dramas of the war played out just behind the front lines. The Germans and the Belgian spies slept under the same roof. They ate and drank together. As the war wore on, they commiserated, all of them sick of it and wanting to return to normal life. Cnockaert herself, as a nurse, often treated and rehabilitated the very soldiers whom her information had caused to be wounded, and she always treated them as fully human, not as enemies. Everything is muddled in war.

There is much more to the book than I’ve spelled out here. It’s a fascinating read, and in the four years of the war, Cnockaert did more living than most people do in a lifetime. She may have been the only person in the war to have won the highest national honors from both the Germans and the Allies. She was awarded the German Iron Cross for her work as a nurse, and the both the Belgian and French Legions of Honor, along with special recognition from the British, for her work as a spy.

If you get a chance, read this book. It’s a hard one to put down.

Impala Wins Writer's Digest Award
The Art of the Cover Letter
What's Wrong with Genre Fiction?
The Girl on the Velvet Swing by Simon Baatz
A Hell of a Woman by Jim Thompson
The Daughter of Time by Josephine Tey
I Am Legend by Richard Matheson
Solaris by Stanislav Lem