Blood and Money by Thomas Thompson

This is a superb piece of journalism and one of the best true crime books I’ve read. In fact, it goes far beyond true crime, richly portraying every stratum of an entire culture and era. The core of the story concerns the sudden and mysterious 1969 death of a wealthy young woman who was well known and well liked throughout her community. The woman’s marriage had been in trouble at the time of her death. Her unhappy husband had a new lover, and immediately after the death, her vindictive father blamed the husband for murder. 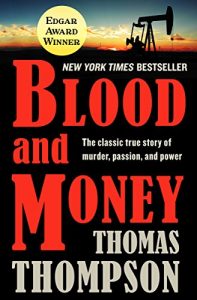 I won’t go too far into the plot, because the plot twists a hundred times before the book ends, and each time you think you understand a character and the significance of the events they’re involved in, something new comes along and upends your understanding, forcing you to reevaluate.

Thompson does an excellent job presenting a tale that involves a number of Houston’s wealthiest families, as well as prostitutes, thieves, hit men, cops, prosecutors, boozers, addicts, bullying oil men, and celebrated surgeons–with the politics of oil and money hovering over it all.

If this had been a novel, readers might reject it as too complicated and too far-fetched. But real life is messier than novels, and as one writer pointed out, fiction has to stick to what’s probable, while real life only has to stick to what’s possible. The second realm is much broader than the first, and much more difficult to wrestle into a thorough and coherent story.

Thompson is an excellent portrayer of characters, and he introduces each new character with rich and salient detail before they become actors in the story. The prostitute is not merely a prostitute. She’s a fully fleshed out human being whose past informs an intelligent world view. By the time you see her interacting with the other characters and making decisions, you understand her motives, her fears and desires. The same goes for the cops, the oil man, the thief, the prosecutors, the young woman and the husband. Because the author has taken the time to make them all well rounded, relatable characters, you begin to see each part of the story from each character’s perspective, and the story that could stand on plot alone becomes exceptionally rich and multifaceted.

The brilliance of this work lies first in the scope and depth of the author’s research, and second in his ability to tell a tale such a complex tale with such richness, nuance, and clarity. If you like stories that portray complex (and lurid) human interaction within a rich social and historical context, you will love this book. Thompson makes it easy to sink in for the long, strange trip.