They Shoot Horses, Don't They

This story follows Robert Syverton and Gloria Beatty, a pair of young people struggling to survive as extras in depression-era Hollywood. A day or so after meeting, they enter a dance marathon, partly in hopes of winning the $1000 prize, and partly for the promise of free food, which they get as long as they continue dancing. 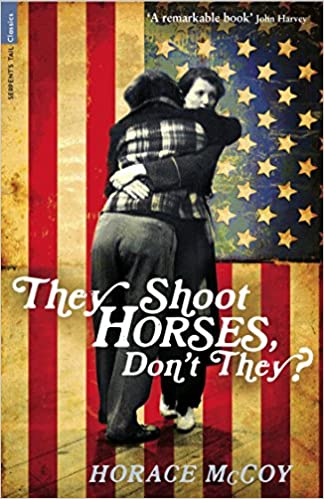 The marathon lasts for several weeks, with the couples dancing round the clock, getting only a ten-minute break every two hours. The dancers themselves are a sort of carnival show for both the wealthy and the riffraff of Hollywood, who come out to the big warehouse on the Santa Monica pier to drink and cheer and watch them suffer. The narrator likes it at one point to a bull fight, in which excitement sweeps the crowd all at once when someone collapses.

The story is a tough and bleak depiction of those who weren’t making it in America during the depression. The Hollywood setting, and the presence of movie stars in the audience, makes an especially poignant point, as the dancers who dream of being stars are now being watched, in their misery and humiliating exploitation, by the stars they dream of becoming.

The most interesting aspect of the book is its portrayal of the dancers, and the community they form. It’s a self-contained little world in which everyone is competing against everyone else for survival, and in which people form bonds so strong, they’re willing to forgive each other for infidelity and even attempted murder.

McCoy presents a world of surprising sex, violence, and vulgarity, matter-of-factly describing realities that most literature and film of that era merely hinted at. The story is not as depressing as it sounds, and despite the sordidness of it all, the book is very hard to put down. It’s only about 100 pages, so it’s easy to read in a single sitting.

The main characters, Robert and Gloria, have fundamentally different world views, Robert being hopeful and optimistic, while Gloria is relentlessly negative and gloomy. The differences in how these two react to their common experience present a good study in character.

The writing style has its quirks. Like The Postman Always Rings Twice, the writing is straightforward and spare, with little description of setting and little attention given to the secondary characters. Both books read like screenplays, with the author leaving the details to the discretion of a director and his actors. While Postman ultimately goes a little deeper into its characters, this book reads more like a social commentary that, despite the spareness of the prose, manages to vividly portray an era and an intense, shared communal experience.