The Daughter of Time by Josephine Tey

Josephine Tey’s The Daughter of Time is the fifth in a series of mysteries featuring inspector Alan Grant. The book is perhaps best known for the praise it received from mystery writer and critic Anthony Boucher, who called it one of the best mysteries of all time. That’s high praise to live up to, but the author began the book with higher aims than most mystery writers ever aspire to, and she made it clear in the first chapter that she wasn’t going to follow the traditional path to achieve them. 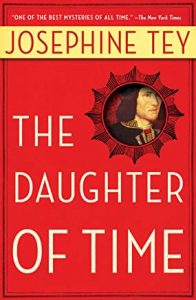 For starters, Tey’s detective is bedridden throughout the novel, laid up on his back in a hospital due to injuries he sustained on a prior case. Grant is suffering from an acute case of boredom. Even the novels piled at his bedside, the latest works of the fictional best-selling authors Silas Weekley and Lavinia Fitch, don’t interest him.

…you knew what to expect on the next page. Did no one, any more, no one in all this wide world, change their record now and then? Was everyone nowadays thirled to a formula? Authors today wrote so much to a pattern that their public expected it. The public talked about “a new Silas Weekley” or “a new Lavinia Fitch” exactly as they talked about “a new brick” or “a new hairbrush.” They never talked about “a new book by” whoever it might be. Their interest was not in the book but in its newness. They knew quite well what the book would be like.

This is another hint from the author that she won’t be presenting a run-of-the-mill mystery.

To help alleviate his boredom, Grant’s friend Marta Hallard, an actress on the London stage, brings him a series of portraits–prints from London bookshops–showing faces and figures from the distant past. As a police inspector, Grant is a reader of faces. He prides himself on his ability to divine from the face a sense of a person’s character, their virtues, vices, weaknesses and habits of mind.

One portrait in particular grabs his interest. He judges the man to be of strong integrity, good judgment, and solid character. The bottom of the print gives the subject’s name. Richard III, king of England from 1483 to 1485, one of the most reviled and vilified characters in all of history. This is the king who Sir Thomas More said murdered his young nephews–children who had been placed under his guardianship–in order to secure his claim to the throne. In Shakespeare’s play, Richard III is physically deformed, malevolent, and unconscionably evil.

Grant shows the portrait to a fellow homicide detective, one of his co-workers at Scotland Yard, and asks if he were to encounter this person in a courtroom, would he expect to see him in the dock or on the bench. His fellow detective replies that the man has the calm and conscientious face of a judge, and he would expect to see him on the bench.

Puzzled that two seasoned detectives have both come to the same reading of the King’s face, Grant decides to look further into the history of Richard III to figure out how a seemingly even-tempered and conscientious man could have conspired to murder his brother’s children in cold blood.

Grant enlists the help of his actress friend Marta and an American researcher, Brent Carradine, working at the British Museum, to conduct the entire investigation from his hospital bed. At this point, we’re already far from the traditional formula of detective fiction. There will be no tours of crime scenes, no chases or tense confrontations. If the story is going to adhere to any sub-genre, it will have to be a procedural, whereby our detective slowly pieces together what made a good man snap and do something horrible. How did the once able and well-respected administrator from York degenerate into the despicable monster portrayed by More and Shakespeare?

But even here, the book doesn’t go according to expectation. Grant impatiently (and correctly) dismisses the accounts of Shakespeare and Holinshed and Sir Thomas More as hearsay. Shakespeare got his story from Holinshed, who got it from More, who himself got it second-hand from a gossip several decades after the events transpired. The case they present, Grant notes, would not be admitted in court, because none of it was first hand, and all of the initial accounts came from unreliable sources who were not only hostile to Richard III, but had a vested interest in maligning him.

Grant notes that most of what constitutes real history is not the narratives historians have composed, but the artifacts left behind by ordinary people who weren’t intending to write history at all. Grant looks for the kind of evidence that detectives look for in present-day cases, the kind that does hold up in court. Things as simple as receipts in a merchant’s account book can show where a person was on a given date, whether they had money, and in cases where purchased items were to be delivered to a third party, evidence of a relationship between the buyer and the recipient.

Grant sets Brent Carradine back to the British Museum to dig up journals, letters, sermons, Parliamentary proceedings and more from the reigns of kings Edward IV, Richard III, and Henry VII. From these, he will piece together a compelling story of what actually happened to the two boys Richard is supposed to have murdered.

The story he comes up with, and the evidence he marshals in its favor, is vastly more convincing than the tales of More and Shakespeare, which have for centuries been accepted as fact. This is another twist on the traditional detective formula. Rarely does a procedural, after so clearly identifying the perpetrator, go on to thoroughly exonerate him.

Inspector Grant remarks several times throughout the story that a detective’s job is to understand how character, motive, psychology and circumstance guide behavior. The narrator notes that Grant’s friend Marta, the actress, has spent her career developing and refining an understanding of these same elements of human nature and experience. Brent Carradine, the researcher, remarks that his job is merely to uncover facts, not to supply commentary or interpretation (though he does some of that in his conversations with Grant).

The tangible evidence that Carradine digs up allows Grant to establish a timeline of events, a cast of characters, and a series of relationships. His analysis of character and motive, based solely on evidence, allows him to fill in some holes about who likely did what, and when, and why. As far afield as we seem to have gone from the detective novel formula, Grant winds up doing in the end exactly what we expect a detective to do: through a combination of evidence gathering, logical deduction, and shrewd psychological insight, he pieces together a coherent and convincing story.

So why does Boucher call this one of the best mysteries of all time? Probably because the author set herself the exceedingly difficult task of overturning a centuries-old conviction for one of history’s most infamous crimes, and then did an exceedingly good job in accomplishing her task. Keep in mind that the story of Richard III and his successor, Henry VII, was more than the standard intrigue of the king’s court. It was the brutal conclusion of thirty years of civil war that ended the Plantagenet dynasty and began 118 years of Tudor reign.

The title, by the way, comes from an old proverb. Truth is the daughter of time. Which is to say, you can lie all you want, but eventually the truth will come out. Especially when a dogged and capable detective is on the case.

This is one of those books that rewards you to the extent that you are willing to invest in it. If you just want to be entertained, you’ll find easier reading elsewhere. If you want to engage your mind and you’re willing to keep track of a large cast of historical characters and a great number of facts, you’ll like this.

At the end of the book, Inspector Grant revisits the tale of Richard III as it’s written in a children’s history book. Grant, who is well attuned to the subtleties and complexities of human nature, is disgusted by the black-and-white tale of malevolence and evil, simple and unequivocal, universally accepted and completely wrong. The actual story with all its complexities is more difficult to digest, and for that reason is unlikely to ever supplant the false story that centuries of repetition have led people to stop questioning.

The story that More and Shakespeare and the history books tell doesn’t hold up under interrogation, and Grant can’t hide his frustration with the supposedly learned historians who repeat it.

“Historians should be compelled to take a course in psychology,” Grant observes, “before they are allowed to write.” Elsewhere he “wondered with what part of their brains historians reasoned. It was certainly by no process of reasoning known to ordinary mortals that they arrived at their conclusions.”

In an earlier conversation with Marta Hallard, Grant remarks, “[H]istorians surprise me. They seem to have no talent for the likeliness of any situation. They see history like a peepshow: with two-dimensional figures against a distant background.”

Marta replies, “Perhaps when you are grubbing about with tattered records you haven’t time to learn about people. I don’t mean about the people in the records, but just about People. Flesh and blood. And how they react to circumstances.”

The detective and the actress know that understanding the human element is essential to understanding any story about people. Brent Carrington puts in a final plug for the author when he says near the end, “A man who is interested in what makes people tick doesn’t write history. He writes novels.”

Or a woman who is interested in what makes people tick. She writes really good novels.

No Country for Old Men
Kill Romeo
You Play the Black and the Red Comes Up by Richard Hallas
Shoot the Piano Player
Iceland, June 2016
I Married a Dead Man by Cornell Woolrich
Bad Boy by Jim Thompson
Warren Lane – Almost There