Mutant Message Down Under

[Note: This book’s preface claims it’s based on a true story. It’s not. If you read this novel as an accurate account of Aboriginal culture, you’ll be misled. It should be categorized as New Age Fantasy. The end of this review contains a link to a story in which the author retracts her claims to the book’s authenticity. As fantasy, though, it’s a pretty good read.]

Marlo Morgan, an American living in Australia, is invited by an Aboriginal group to what she thinks is an awards banquet. Her guide, Ooota, picks her up from her hotel in a beat up Jeep and drives her deep into the Outback to meet a waiting tribe whose members call themselves The Real People. The tribe burns her clothing, wallet, camera, passport and all other possessions and invites her on a walk across the continent. 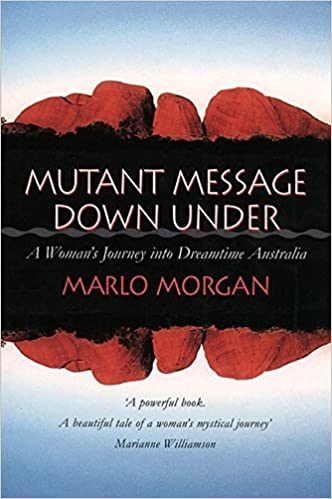 They spend the next four months trekking barefoot through some of the world’s most inhospital land. The tribe carries virtually no food or water. They begin each day with a prayer of gratitude and trust the world will provide for them.

It does, as it has for thousands of years.

In the West, those who don’t already live in poverty live in fear of it. They cling to jobs they don’t like and accumulate possessions to which they become slaves.

The Real People live with virtually nothing. They don’t know where their next meal will come from, or if they’ll even eat that day. In their morning prayer, they ask simply for what “is in the highest good for all life everywhere.” The tribe accepts with gratitude whatever follows, trusting in the generosity of the Divine Oneness who sang the world into existence.

Scientists know [the Aborigines] have inhabited Australia for at least fifty thousand years. It is truly amazing that after fifty thousand years they have destroyed no forests, polluted no water, endangered no species, caused no contamination, and all the while they have received abundant food and shelter. They have laughed a lot and cried very little. They live long, productive, healthy lives and leave spiritually confident.

All the world is one, and what you do to others, you ultimately do to yourself. “We think of Divine Oneness,” Ooota says, “as feeling the intent and the emotion of beings–not as interested in what we do as in why we do it.”

Mutants, in the tribe’s view, are those who have strayed from nature. They injure the world that nourishes them, injuring themselves in the process, though they refuse to see this and refuse to care.

The human body is a vessel for eternal spirits who have chosen to come here. Human life is the process of discovering and becoming who you already are, while learning to deal with intense emotion that can take you off course.

Life is a series of spiritual tests, and it will keep giving you the same test again and again until you pass. (Think about that from the perspective of Western psychology. People get locked into destructive patterns of behavior, they keep having the same damaging relationships again and again. Moving forward is often a matter of “breaking the cycle.")

But “the Divine Oneness planned no suffering to any living creature, except what the creature accepts for itself.”

Why did the tribe choose Morgan for this journey? They felt she was compassionate and open. They felt that many Mutants, witnessing the death of nature and feeling the spiritual emptiness of modern culture, are on the cusp of becoming Real People. They felt she could bring their message of oneness, openness and gratitude to those in the industrialized West who “contain yet the spark of divine perfection.”

When she parts from the tribe, Morgan thanks them for the new spiritual awareness they have given her. The Elder says, “There was nothing we could give you that you did not already have… you learned to accept, receive and take from us. That is our gift.” And it’s the one the author wants to pass on to you.

Keep in mind this book is fiction and, according to Australian Aboriginal tribes, does not accurately represent Aboriginal culture or spiritual beliefs. It depicts an idealized tribe of noble savages who don’t seem to suffer from the seven deadly sins that afflict the rest of the human race. Take a look at what the Aboriginal Research and Resource Centre had to say to The Independent when the book was released.

The article Helping Yourself: Fabrication of Aboriginal Culture provides a lengthier discussion of the book’s authenticity.

Critics have said the book is primarily a vehicle to express New Age spiritual beliefs, and it does read that way. But it gives the reader much to reflect on, particularly in its critique of the materialism and spiritual poverty of modern consumer life.