I just finished reading Dierdre Madden’s Authenticity , which explores some topics that have been very much on my mind lately. The book looks at the lives of four artists in Dublin, around the year 2000. Roderic Kennedy is a successful painter in his late forties. “Successful” here means he’s able to practice his art full-time, keep a studio, and not starve. He has a little reputation and some respect among the local critics and patrons.

His brother, Dennis, has an artistic soul, which is to say, he’s sensitive and unusually attuned to and appreciative of beauty. He learned early on that he didn’t quite have the talent to fulfill his dream as a concert pianist, so he chose a career in a bank that would offer him a stable life. 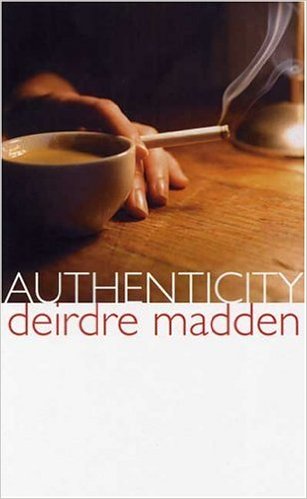 Julia Fitzpatrick, Roderic’s young lover, is just starting on her artistic career. She’s in her early twenties, and like Roderic (and many of us in our early twenties), she can get by with very little money, as long as she gets the time to practice her art.

The last character, William Armstrong, has the artist’s sensitivity, the appreciation of beauty, and the creative drive. But he drifted into a law career, and now, in late middle age, he begins to feel the anguish of what it means to have chosen the wrong life, and the despair of knowing he’ll never become who he was born to be.

This is not a plot-driven book. It’s an idea-driven book, a detailed study in character, and a lengthy examination of lives lived and unlived within a culture that evolved to support more practical, less sensitive characters. It moves slowly, and you have to slow down to read it. The reward comes from the quality of the writing, and the depth and accuracy of the author’s insights.

Roderic, the successful painter, has chosen the only life he could choose, and he’s lived it at great cost, including a nervous breakdown, and the loss of his family and years of his life to drink. His life is rich in both reward and regret. Julia is still young, but seems headed down a similar path. William, the lawyer who denied his artistic side, has regrets too deep to overcome, and the rewards he did reap aren’t meaningful enough to keep him going.

The last character, Dennis, strikes an interesting balance. He is his brother’s patron, and in his brother Roderic, he sees first-hand almost every day the reality of the life he chose not to live. He knows he doesn’t have the constitution to endure what his brother endures, painting in a cold studio, too absorbed in his work to notice that he’s freezing; not knowing whether he can pay the bills at the end of the month; getting picked on by critics and not knowing who he might be sleeping with from one night to the next. Dennis doesn’t suffer for his choice the way William does, because he actually took the time to weigh the options, and he gets to compare each day the reality of the life he chose to the one he didn’t.

Early in the book, while discussing patrons and the arrogance of the rich, Roderic remarks to Julia that “They need us as much as we need them. Only they don’t know it.”

Dennis is one of the few who does seem to know this. His one near-breakdown occurs when Roderic marries, and Dennis loses a part of his identity. He doesn’t create art, but by supporting his brother, he enables it, and it’s important to him to be able to participate at that level.

There’s a section late in the book where Julia talks to William about the few paintings he’s actually made in his life.

“Do you know where it comes from,” she asked, “this compulsion to paint?”

“It was always there,” he replied, “ever since I was a small child. I used to think it was a neutral thing, but now I’m not so sure. This compulsion, as you call it. This instinct. That’s how it strikes me, as an extra instinct. Not everyone has it, but if you do, you ignore it at your peril. It’s like the need for sex. That can also seem to be a neutral thing, but it isn’t. It has a dark, blind, dangerous side.”

Poor William was born into a family in which devoting one’s life to art simply wasn’t an option. To discover that path would have taken more vision than his narrow social world provided. Unlike Roderic, with his generous brother, he had no patron. No one looking out for him. He couldn’t see the authentic path, so he took the acceptable path his family pressured him into.

His story reminds me of a conversation I had with a friend many years ago, who was just then coming out and letting everyone know he was gay. He said that in elementary school, the nuns used to rap his knuckles with a ruler every day because he wrote with his left hand, which was wrong. They were determined to save him, and make him right.

“But they can’t make me someone I’m not,” he said, still upset about it many years after the fact. “I was born this way, and this is who I am.” His resentment over that treatment bred a lifelong disrespect for authorities who wouldn’t listen to the truth. So in a way, the nuns actually did save him by building in him at an early age, when the stakes were lower, a defiance and a resolve that would serve him later, when he needed it.

In the book, William elaborates on the parallel between the sexual instinct and the artist’s creative instinct with a story about a fellow lawyer who wouldn’t or couldn’t find a satisfactory sex life at home and frequented prostitutes to the point of destroying his family, his career, and his reputation.

William is right about that creative instinct. If you don’t get to exercise it, whatever else you may be doing in your life doesn’t quite make up for the loss. And creative repression, like sexual repression, seeps out in nasty, self-destructive ways, as when the burdens of family life impose so far into Roderic’s creative space that he turns to drink.

Not everyone has it, but if you do, you ignore it at your peril. Like being gay, or left-handed, people who have the powerful, persistent, un-ignorable urge to create are just born that way, and it doesn’t go away. Authenticity is about the need to recognize that creative instinct, and to engineer a life in which that instinct can express itself. It’s also about the cost of choosing that life, which is substantial.

Unlike the respected professions of law and medicine, there is no straightforward institutionally-sponsored path to a career in creativity. There are almost no commercial institutions putting out want ads for painters, harpists, poets or sculptors. You just have to go out and do it. And if anyone besides yourself winds up caring about what you’ve done, then lucky you.

As Julia says, “The secret to art is that there is no secret. You just put in the time and do it.”

Authenticity isn’t a page-turner, a diversion, or an entertainment. It asks for a substantial investment of time and attention. If you’re willing to give it, you’ll be rewarded.

Help Design My Next Cover
Then She Was Gone by Lisa Jewell
Eight Million Ways to Die
Six Days of the Condor by James Grady
Paris, Sept. 2017
Suburban Dicks by Fabian Nicieza
An Award and a Sale
Blood and Money by Thomas Thompson