A few months ago, I bought a RadCity 4 electric bike from Rad Power Bikes. I got it for commuting into town (5 hilly miles) and to the office (8 miles, with steep hills).

The bike arrived about a week after I placed the order. It comes in a box, mostly assembled, with the customer having to do the final steps of attaching the pedals and handlebars, and connecting some wiring. The assembly was pretty easy. You don’t need much mechanical ability. 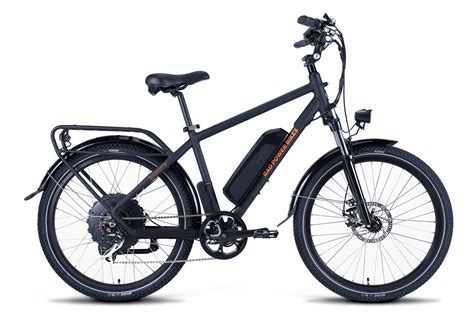 The first thing I noticed about the bike was that it was heavy: about 68 pounds. I considered that a negative, though I later changed my mind, as I’ll describe below.

This bike has a number of pluses, and after 500 miles of riding, I would say it has no serious minuses. Here are good points:

A couple of points to note:

Overall, this bike is a phenomenal value for commuters and casual riders. At $1,599, it’s $2,000 cheaper than comparable offerings from traditional bike manufacturers. But there’s nothing cheap about the design, construction, or materials. If you’re looking for a commuter or an occasional joy ride, this is your bike. It hauls groceries like a champ too!

One final note: The RadCity has a rear hub motor. I was worried the magnets in the motor might damage electronics in my rear pannier, since they’re sitting just inches from the hub throughout my daily commute. The magnets don’t seem to bother electronics at all. I’ve ridden for weeks with a MacBook Pro and 5TB spinning magnetic drive in the panniers, and neither was affected.

So why would I buy another electric bike if the RadCity 4 was working so well? Because I couldn’t get the RadCity away from my wife.

Also, I’m an aggressive rider. Not rude or agro, but I ride full steam all the time. That’s a habit I picked up during my years as a bike messenger. The RadCity rides like an upright cruiser and isn’t suited to an aggressive riding style.

I had a Specialized Rockhopper Comp 29er mountain bike languishing in the garage. Since I do most of my riding on the road, I knew I’d use it more if I put some slicks on it and added a motor. 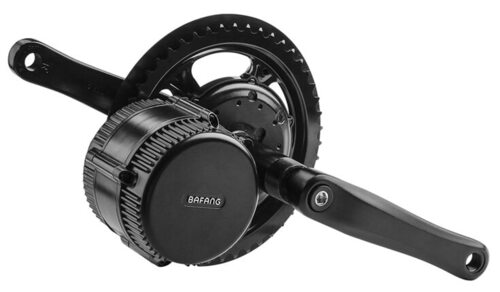 I ordered the Bafang BBS02 750 Watt Mid-Drive kit with a 48V 17.5 Ah battery. With shipping, that came to about $1,000. Mounting the battery and motor were surprisingly easy. The hardest part was removing the old stuck bottom bracket. (YouTube has some interesting videos showing creative solutions for stuck bottom brackets.)

Everything in the Bafang kit worked except:

I spent an extra $20 for the shift sensor, which cuts power for a second when you change gears. This prevents the motor from damaging the rear cassette when you shift under power. I also added the engine cut-off sensors for hydraulic brakes (another $20). These were easy to install.

The Specialized with the new motor and battery weighs around 45 pounds. That’s substantially lighter than RadCity’s 68 pounds. I added an Ibera rack which is almost as strong as the RadCity’s rack.

After 300+ miles on the Specialized + Bafang 750, here are my observations:

While I do like being able to pedal full force on the Specialized, my first few rides on this bike gave me a new appreciation of the RadCity’s hefty weight. The RadCity is a very stable bike. You want that if you’re a casual rider tooling along at 25 mph.

The Specialized is more nimble, but learning to control it with that powerful motor will take some practice.

Bafang advertises their controllers as “intelligent,” meaning that they adapt to the way you ride. After 1200+ miles, I can say this is true. Instead of starting with a lurch, the motor now accelerates more smoothly. On the lower assist levels, it cranks out less power once you start turning the pedals at 60+ RPM.

You can still increase the assist level to get more power if you want it, but the upside of the controller NOT providing too much unnecessary boost is that you’ll get more mileage per charge.

I have now ridden this bike on trails and have had no problem with roots, rocks, or anything else that I thought might damage the low-mounted motor. You do have to watch for obvious dangers, but in general the motor position isn’t a problem.

If you’re a hardcore rider and you like to tinker with bikes, the Bafang 750 is a great kit that will work on the bike of your choice.

If you’re a casual rider, the RadCity is a phenomenal value with a smooth, stable ride and no hassles. It’s easy to set up, easy to ride, and everything just works.