The Big Bite by Charles Williams

Charles Williams' The Big Bite is very good crime/noir thriller, though it’s not quite up there with his brilliant 1953 noir The Hot Spot . 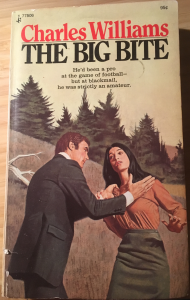 The image above shows the cover of Pocket Books' 1973 reprint of The Big Bite. The story is better than the cover, and it takes place in the 1950s, not the 1970s.

John Harlan’s pro football career has ended after another driver hit him in what appeared to be a drunk-driving accident. After his recovery, Harlan is in very good shape by normal standards. He’s in his late twenties, strong, and fit. He just lost that extra bit of quickness that it takes to compete at the highest level of sport, and now that he can’t play football anymore, he’s on the skids with no idea what to do next.

As he drifts about, the insurance investigator who originally looked into the drunk-driving accident tells Harlan he suspects there may be more to the story. Part of the accident may have been deliberate, and while Harlan wasn’t the intended target of that mischief, he certainly was a victim.

John Harlan is a man of low morals and few scruples. He’s bitter, and he thinks he’s entitled to get back some of the money he lost due to the premature end of his career. He decides to blackmail the two people who he thinks were responsible for the “intentional” part of the “accident.”

When it comes to crime, Harlan is a good planner, even though he’s a novice. He takes huge calculated risks, because he’s greedy as hell. His risks pay off, up to a certain point, because of his obsessive planning, which is the focus of much of the narrative. He neglects some little things along the way, like failing to examine parts of his plan from every conceivable angle. He also neglects some big things, like failing to fully understand the nature of the people he’s blackmailing.

What begins as a brutish game of intimidation and force evolves into a subtle and intense battle of strategy and clever tactics by both the blackmailer and his victims. In fact, for much of the book, it’s unclear who the victims will be. Because we see the world through Harlan’s eyes, we become as convinced of his plans as he does, and we don’t see their flaws until they smack him in the face. Then the reader gets smacked in the face too because Harlan can really suck you in. He’s up against some very clever foes, particularly Julia Cannon, who plays a number of roles in turn, and all of them convincingly. She the cheating wife, the femme fatale, the victim, the master, the psychologist, the moralist, and the oracle.

Though the poor writing in the first few pages of the book may turn you off, stick with it. You’ll start to see the value by the end of the first chapter. This one really comes alive at the end, when a story that has looked like a series of adventures and misadventures starts to take on new layers of depth, darkness, and moral heft. It’s a Jim Thompson-style ending in which a character slowly comes to realize he is imprisoned by the very desires and actions he thought would set him free. Julia Cannon becomes the prophetess and the bearer of wisdom and fate, bequeathing to Harlan a legacy and a future he tries vainly to reject, and exposing in him every flaw she so eloquently enumerated when she chained him to the bed and forced him to listen to what he had so rudely dismissed as “her incessant yakking.”

What she tries repeatedly to drive home to him, and what she does get across loud and clear to the reader, is the hidden cost of crime: that is, the cost to the perpetrators. We get it, and we get her frustration when she says to Harlan, “I was unfaithful to my husband. I realize you have already grasped this, at least as far as its surface aspects are concerned, and there would be no point in attempting to explore it to any depth because eventually we’d run into language connected to emotion, which obviously would have no meaning to you. How would you describe a sunset to a blind mole living on the dark side of the moon?”

The Big Bite was originally published by Dell in 1956. This review is of the 1973 Pocket Books reprint, which sold for 95 cents and includes a full-color two-page ad for True cigarettes between pages 128 and 129. Your best chance to find this title is the Mysterious Press eBook edition of 2012 .

The Midnight Bell by Patrick Hamilton
A Practical Guide to Self-Publishing
I Am Legend by Richard Matheson
An Award and a Sale
In Memory of O'Neil McGean
Vanish in an Instant by Margaret Millar
Six Days of the Condor by James Grady
A Travesty, by Donald Westlake