We by Yevgeny Zamyatin

The narrator of We, D-503, is a mathematician and engineer, the primary designer of a rocket called the INTEGRAL. D-503 is a citizen of the totalitarian OneState, in which the Benefactor presides over a society of perfect reason. People are “Numbers.” There is no I anywhere in the society, no concept of an individual. Each Number is simply a component of the larger We. 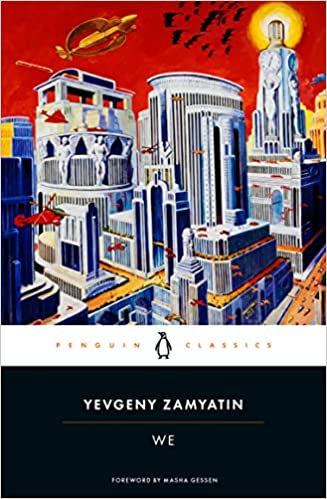 Everyone’s daily lives are governed by the Table, which tells them when to get up, when to eat, when to work, when to have sex, how many times to chew each mouthful of food, etc. When the Numbers go out for their walk at the same hour each day, they all walk in lockstep. Every movement at work is governed by the efficiency rules of Frederick Taylor, the mechanical engineer who wrote about efficiency of movement in the workplace.

OneState broke separated itself from the rest of the world after the 200-years war. The state itself is a huge city of glass, which the inhabitants are taught to praise for its clarity and transparency. The city is protected from the rest of the world by The Green Wall (which is also made of glass). Beyond the wall are trees and animals and other hideous, disorganized things that have no reason or logic.

The Benefactor teaches that happiness comes from the absence of desire, which is irrational, and the path to absence of desire is a strict adherence to logic and reason in all aspects of life.

There is no marriage or family on OneState. If a person wants to have sex with another person, they put in an application at the Health Ministry, and if their application is approved, they get a book of pink tickets which they can redeem with their chosen parter at scheduled times.

When the book begins, D-503 is at work writing a sort of ode to OneState, which he will put into the INTEGRAL, to be sent off to other planets, to teach the savage inhabitants the greatness of rational civilization. D-503, like everyone else in OneState, believes it is the state’s duty to export its system of happiness to all other rational creatures.

The problem arises when D-503 is assigned a new sexual partner, I-330, a subversive free-thinker who embraces instinct, desire, the unknown and unknowable. These are all the things OneState has taught its citizens to reject, and things which D-503, being a mathematician, tends to reject by nature. Early on, he describes the encroachment of feeling into his thought process as being like an irrational number that has crept into an equation and can’t be factored out.

He becomes obsessed with I-330, because she can access feelings in him that he cannot access himself. His impulse toward the irrational becomes overpowering and almost obsessive. Needless to say, this causes a lot of problems in a society that was designed not just to repress, but the deny and invalidate desire, irrationality, the “I”, and by extension, imagination and creativity.

The book maintains a strong and consistent set of symbols and imagery (the hard, transparent glass, the masses of figures in lock step, the looming accumulator tower, the Green Wall and the ancient house). It also uses the metaphor of mathematics and engineering throughout, as examples of ideal systems of representation and manipulation that can be applied to materials, and which OneState tries to apply to humans. A human who cannot abide by the mathematical logic of OneState, who cannot or will not be engineered into his position in the “We,” is seen as a defective part, like a faulty piston or a bad spark plug, and is destroyed by the Benefactor. As one of the characters remarks late in the book, love has to be cruel. This society constantly destroys parts to save the whole, and the Benefactor teaches the Numbers to understand that as an act of love.

This book was written around 1921, and the correlation between OneState and communism is obvious. In those early days, at least, communism sought to replace almost every human belief system with reason, and to build an engineered society in which everything was centrally planned. The way the citizens are brainwashed, and the ignorance, fear, and revulsion they feel toward the “mythical” world beyond the Green Wall is reminiscent of today’s North Korea.

The book also comments quite a bit, both directly and obliquely, on Christianity, which D-503 describes as humanity’s first attempt to establish an all-powerful Benefactor (who also happened to be cruel).

The one difficulty in reading We lies in the narrator’s language in the second half of the book. In the first half, when everything in his daily life is rational and follows the Table of prescribed activities, the narrator’s language is clear, detailed, and precise, as you would expect from a mathematician/engineer. Those fields, after all, are all about clarity, precision, and detail.

As love, desire, yearning, anger, confusion, and other emotions begin to take over D-503’s daily life, he often leaves his sentences hanging, because he simply has no way to express such imprecise emotions. He’s trying to describe emotion using the language of OneState, which is a language from which the terms of emotion have been removed. As a result, the narrator leaves many sentences unfinished, because he just doesn’t have the words to complete them.

This can be maddening at times, especially when the narrative goes like this (I’m paraphrasing): “The footsteps now were close behind me. When I turned to look, I saw it was… Of course, my first thought was… And from his eyes, I could tell he was thinking… And… well… you know.”

First Draft of a New Novel: Gate 76
No Country for Old Men
Blood on the Moon by James Ellroy
The Maltese Falcon
Vernon Subutex One by Virginie Despentes
Shoot the Piano Player
Black Wings Has My Angel
The Postman Always Rings Twice