The Hot Spot by Charles Williams

Harry Madox has drifted in and out of a number of jobs, and has one failed marriage and some unspecified debts under his belt. When the story opens, he’s just landing a job as a car salesman in 1950’s small-town Texas. He’s not in town long before he meets two women. The young, sweet Gloria Harper brings out the best in him, against his nature and sometimes against his will. And then there’s the boss' wife, Dolores Harshaw, who has a knack for getting him into and out of trouble. 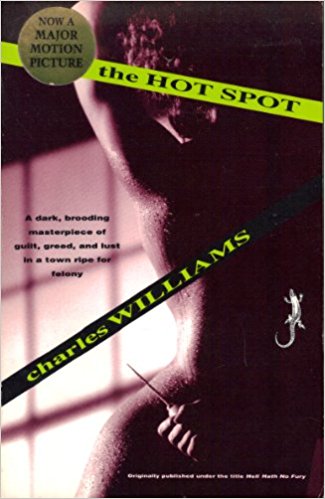 Madox is one of those guys for whom the straight and narrow just hasn’t worked out. “In this world, you took what you wanted; you didn’t stand around and wait for someone to hand it to you.” He comes up with a pretty good plan to rob to local bank, but his entanglements with Gloria and Dolores complicate everything. I won’t spoil the story; it’s particularly interesting to see how two kindred spirits recognize each other instantly, bring out the worst in each other, and make a mess of things. It’s like watching a train wreck in slow motion.

“Moonlight from the window had moved up the bed and now it fell diagonally across her from the waist to the big spread-out breast which rocked a little as she shook the ice in her glass. I thought of a full and slightly bruised peach beginning to spoil a little. She was somewhere between luscious and full-bloom and in another year or so of getting all her exercise lying down and lifting the bottle, she’d probably be blowzy…

“She had a bos’n’s vocabulary. My head felt worse and I wondered why I didn’t get out of there. She was already on the edge of being sloppy drunk, kittenish one minute and belligerent the next. God knows I’ve always had some sort of affinity for gamey babes, but she was beginning to be a little rough even for me. She had a lot of talent, but it was highly specialized and when you began to get up to date in that field you were wasting your time just hanging around for the conversation.”

Dolores Harshaw has some plans for Harry Madox, and she’s a smart one. He knows it too. “The smart thing was to get out of here and let her happen to somebody else.” But he just can’t quite untangle himself.

Overall, this is one of the best noirs I’ve ever read, with steadily-building tension and suspense. Williams writes straightforward prose when the situation calls for it, and can also be witty and insightful. His characters ring true, and he provides good insight into their motivations and weaknesses. Dolores Harshaw may be the best femme fatale in all of crime fiction: seductive, conniving, compelling, manipulative, jealous, ruthless, intelligent, and unhinged.

It’s a shame this book is out of print, but you can find used copies online. “The Hot Spot” is the book’s title under the Black Lizard imprint. It had been published earlier by Gold Medal under the title “Hell Hath No Fury.”