A Touch of Death by Charles Williams

Williams is one of the great underappreciated American crime writers of the 20th century. A Touch of Death, first published in 1953, bears the hallmarks of many of his other works: a down-and-out guy around thirty years old who’s not as smart as he thinks he is, a very smart and practical woman who’s more interested in getting things done than in sticking anyone else’s ideas of morality, and a seemingly simple caper that turns out to be vastly more complicated than it first appears. 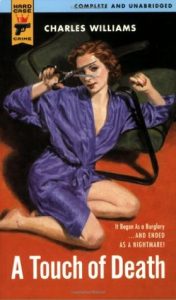 Lee Scarborough, a former football player who is nearly broke as the story begins, accepts a proposition from a woman named Diana James, whom he’s just met. She wants him to drive a few hours north to the small Texas town of Mount Temple, sneak into the home of the wealthy Madelon Butler, and steal the $120,000 in cash that Ms. Butler’s late husband embezzled from the bank.

Scarborough has an easy enough time getting into the Butler mansion, but as he searches for the money, he sees signs that others have been there before him, apparently searching for the same thing. Well, wait a minute, he thinks. What happened to those people?

He then discovers there’s another person in the house that was supposed to be empty. Madelon Butler is in her bedroom, drunk and listening to classical music on a phonograph. In a minute, it gets worse as Scarborough discovers he’s not the only prowler in the house.

We’re only in chapter three at this point, and our protagonist is already in way over his head. I won’t give away what happens from there, but Scarborough’s problems get a lot worse, especially when Diana James unexpectedly reappears. Scarborough begins to understand that he has unwittingly walked into the middle of a feud between two sharp and ruthless women who truly hate each other. And he has the perfect mix of desperation, false confidence, poor judgment and greed to make his situation a whole lot worse.

One aspect of this book that is unusual for the crime/noir genre is that there is no sex or even sexual attraction between the criminal protagonist and the femme fatale who assists him on his path to self-destruction. Lee Scarborough and Madelon Butler genuinely dislike each other. Ms. Butler never reverts to sex appeal to manipulate people. She’s smart enough to get what she wants by simply outthinking everyone.

As the plot continues to thicken, we watch Mr. Scarborough try to think his way out of the hopeless checkmate position that Madelon Butler has maneuvered him into. The sense of the ever-tightening noose makes this book reminiscent of Jim Thompson’s work, though where Thompson is the better psychologist of perversity, Charles Williams is more ingenious at constructing an endlessly twisting plot and a devastatingly effective femme fatale.

Madelon Butler, unlike many women in the noir genre, is no underworld tramp. She’s cool, well educated, and exceptionally articulate. When Scarborough asks her why she killed her philandering husband, she says:

Though the opening chapters of the book are a little clunky, and some of Scarborough’s early decisions tax the reader’s credulity, the ever-thickening plot of the story soon makes up for those shortcomings. As the web of current and past events becomes more and more dense, the reader feels Scarborough’s world spiraling out of control. We feel his growing sense of paranoia, his sense of entrapment, and the full unraveling of his mind.

Though I don’t think this is Williams' best work, it’s still a very good read. If you find yourself liking this book, check out an even better work of his, The Hot Spot.