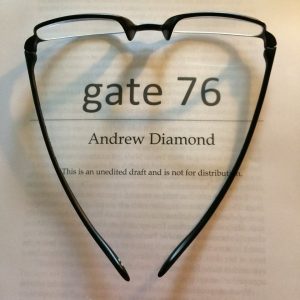 A few months ago, my wife brought home a book by Micheal Tolkin called Among the Dead . Tolkin was the author of The Player , which was made into a film directed by Robert Altman, and like The Player, Among the Dead is a dark satirical look at the vanity and egotism of the bit players in the entertainment industry.

Among the Dead begins with a man missing a flight that he was supposed to be on with his wife. The plane crashes, and the rest of the book is an examination of the man’s thoughts and character, and of his failure to deal with or even care about the real consequences of what has happened. The man himself, with his shallowness and lack of empathy, can be counted metaphorically among the dead.

When I read it, I thought, “This book would have been a lot more interesting if the woman hadn’t gotten on that plane.” I explained the idea to my wife, but she didn’t quite get it. So I wrote the first chapter of the book and showed it to her. I said, “See? Now that’s an interesting story.” I had no intention of finishing it. I just wanted to show her what a good premise that would be. But after reading the first chapter, she was hooked. She said, “You have to finish this! I need to know what happens.”

So I did. You can read the first chapter here.

The manuscript is complete, and I’ve started to get feedback from beta readers. It will go to the editor in a few weeks, and then I might try shopping it around to publishers.