The Billion Dollar Whale, by Wall Street Journal reporters Tom Wright and Bradley Hope, describes the looting of Malaysia’s 1MDB sovereign wealth fund by con man Jho Low and his associates. Although this story has been in the news for years, and many are familiar with its outlines, the book provides rich details about a series of financial crimes whose scope and audacity is breathtaking. 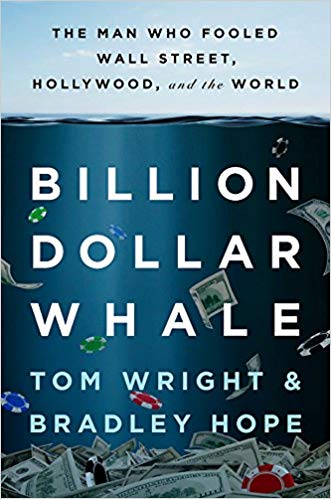 Jho Low came from a family in Penang provice, Malaysia, that had enough money to send him to boarding school at Harrow, where he met the children of some of the world’s richest families. Among them was Riza Aziz, the step-son of the man who would soon be Malaysia’s prime minister. Low carefully cutivated his connections to Aziz, and to a number of other well-connected Asians and Arabs he would meet at Harrow and later at the University of Pennsylvania’s Wharton School.

The authors compare Low to Jay Gatsby, the Fitzgerald character who was obsessed with gaining acceptance into the world of the ultra-rich. Low certainly seemed to want to impress the wealthy, and especially the gilded celebrities who would eventually surround him. The only way he knew how to do that was by making huge shows of wealth. In his early twenties, he didn’t have enough money to show off, but he kept his eyes open, looking for opportunity, and was unusually canny in both identifying and cultivating connections with morally pliable people who had access to money.

After meeting the manager of one of Abu Dhabi’s sovereign wealth funds, Low understood it would be a lot easier to con his way into managing someone else’s hard-earned money than to earn it himself.

When his friend’s step-father, Najib Razak, became prime minister of Malaysia, Low saw his chance. The purpose of a sovereign wealth fund is to invest the assets of a country’s government. Malaysia didn’t yet have such a fund, and Low convinced the prime minister to set one up.

Low made a number of clever moves early on. One was to orchestrate carefully-staged meetings between the Malaysian prime minister and Low’s connections in Abu Dhabi to convince prime minister Najib that investment money from the Persian Gulf was available to fund land and business development in Malaysia. Another was to convince the prime minister to start the 1MDB fund, using proceeds from a state bond, to assist in the development. Low’s third early move was to stuff the board that oversaw the 1MDB fund with people who were willing to let him make all the behind-the-scenes decisions without inquiring into what he was doing.

The success of Low’s scheme depended in part on him funneling cash back to the prime minister to help prop up his corrupt government. Najib seemed willing to accept hundreds of millions of dollars without ever asking where it came from.

At 1MDB’s inception in 2009, Low suddenly found himself in control of over a billion dollars, which he was supposed to invest on behalf of the people of Malaysia. He immediately deposited most of it into accounts he controlled. The accounts belonged to shell companies he had set up in territories with lax banking laws in the Carribean and in the Seychelles.

Low paid huge sums of money to his friends in Abu Dhabi who had helped orchestrate the meetings that persuaded Najib to establish the fund. Those cronies turned out to be just as crooked as Low, setting up fake accounts that looked like they belonged to their employers, so that wary bankers would not be suspicious of the huge wire transfers flooding in. Low, of course, was also careful to push money back to Najib.

In order to pull all this off, Low needed the help of a number of banks, each of which had internal compliance departments responsible for stopping or reporting fraudulent transfers as well as anything that looked like money laundering.

As he had done in cultivating his connections with the prime minister and with the fund managers in Abu Dhabi, Low was careful to test out the banks' willingness to participate in transactions that would have raised the suspicions of any auditor. A number of world-renowned banks, as well as several smaller private banks refused to do business with him.

Though these banks couldn’t prove he had done anything wrong, the air about Low’s finances was like the smell around a barrel that contained a rotting corpse. You didn’t have to open it up to know you wanted no part of what was inside.

Nevertheless, because the illicit transactions would be profitable for whoever processed them, and because he was shuttling huge sums of cash through multiple accounts to hide their provenance, Low promised to bring in lots of business to any bank willing to turn a blind eye to his operations.

Several banks did agree to work with Low, including Goldman Sachs, which was still trying to repair its image after the subprime mortgage collapse. Goldman’s leaders had recently been forced to explain to Congress why they sold mortgage-backed secutities to their customers, and then correctly bet that those securities would fail, profiting twice on the transactions at the expense of their own customers.

The authors seem to reserve special disdain for Goldman and its then president, Gary Cohn, who seemed to encourage the bank’s participation in Low’s 1MDB scandal, and to reward those who made it possible.

The Billion Dollar Whale focuses primarily on Jho Low and his absurdly lavish lifestyle. Low liked to party with the Hollywood elite all around the world. Among the celebrities appearing often at his parties were Leonardo DiCaprio, Kanye West, Alicia Keys, Jamie Foxx, Swizz Beats, Busta Rhymes, Paris Hilton, and Britney Spears.

At the time, none of them knew Low’s money was stolen. He was simply a guy who liked to have a good time–sometimes a few million dollars worth of good times in a single night.

After raising and stealing several more rounds of capital for 1MDB, Low wound up owning a chunk of EMI Music, a multi-million dollar penthouse in New York, mansions in Los Angeles, his own $35 million dollar plane, a $250 million yacht, a Hollywood film studio, and over $300 million worth of art. That’s in addition to the $681 million in kickbacks he gave to the Malaysian prime minister, over $600 million in commissions paid to Goldman, and countless millions he gave to his co-conspirators.

In all, Low made off with around $5 billion over a period of seven years. The audacity with which he committed his crimes and his spectacularly public spending displays are astonishing. Most readers, I suspect, will want to read the book just for the accounts of his partying and the way his intoxicating displays of wealth blinded even the richest and most celebrated people in the world.

It’s also ironic to note that his most visible legacy in the US may be The Wolf of Wall Street, the Scorcese-DiCaprio film he financed. The movie itself chronicles the life of Jordan Belfort, a smooth-talking swindler who conned investors out of millions and lived an over-the-top party lifestyle, just like Low.

While Low was able to fool bankers, investors, statesman, royals, celebrities, and journalists, the reformed Jordan Belfort recognized him instantly as a fellow swindler. Belfort’s first exposure to Low came at an absurdly lavish pre-production party for the The Wolf of Wall Street. Belfort calculated the cost of the event in his head, then turned to his girlfriend and said, “This is a fucking scam–anybody who does this has stolen money. You wouldn’t spend money you worked for like that.”

The Billion Dollar Whale is an extraordinary piece of reporting. Simply finding and piecing together the details of this sprawling story is an accomplishment in itself. Actually being able to tell it, with all its characters and complexities is a testament to the abilities of the authors.

The story dazzles as a portrait of wealth and excess, and disheartens as an exposé of rampant corruption that seeps even into the most highly regulated institutions of a supposedly respectable society. If this story were fiction, it would never fly. It’s too outrageous and too unlikely. And yet it happened. Wright and Hope’s breathless account of it is fascinating and almost impossible to put down.

Bowling Alone by Robert Putnam
Kill Romeo is Now Available
The Man in the High Castle
The Great Divorce – C.S. Lewis
Thirty Years a Detective
The Choice by Edith Eger
How's this for coincidence?
The Bhagavad Gita: The Song of the God Retold in Simplified English