An Air That Kills by Margaret Millar

Margaret Millar’s 1957 novel has a simple setup: a bunch of men in their late thirties are meeting for a weekend away from the wives and kids at a remote country lodge to fish, play poker, and drink. Only one of them never arrives. The boys call the wives, and together they reconstruct a picture of where Ron Galloway was last seen and where he was headed. 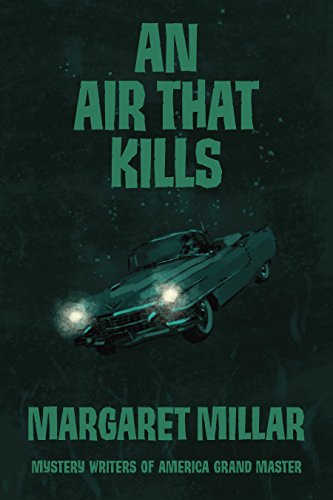 Millar’s novels of the mid to late 1950s are brilliant studies of what actually goes on under the surface of middle-class American and Canadian life. (This one happens to take place in and around Toronto. Millar herself was from Kitchner, Ontario.)

The missing pal, Ron Galloway, was last seen with Thelma Bream, the wife of his best friend, Harry. This is the very woman Galloway’s wife Ester had accused him of having an affair with in the opening chapter. In Millar’s novels, as soon as you scratch the surface of placid domestic life, you find the whole living organism pulsing not so placidly beneath.

Millar is a psychologist, sociologist, ethnographer and a superb writer. Her books are like time capsules containing not only the artifacts of the world she’s portraying, but the people as well.

Her characters are all flawed in recognizable ways. They’re all people we have known. Millar doesn’t waste much time on backstory, because she doesn’t need to. Her characters are richly drawn through dialog, action, and description.

Even her throwaway descriptions of minor characters are rich and striking, like this one of the lodge’s groundskeeper, MacGregor, who manages the fishing boat (the Estron):

MacGregor and only MacGregor operated the boat. He did not insist on this prerogative, he merely let it be understood that the Estron was high-spirited and temperamental, and, like any such woman, needed a strong and knowing hand if she were to avoid the disastrous impulses of her nature.

Of course, that’s tongue-in-cheek. MacGregor’s view of high-spirited women, not the author’s. But it’s also characteristic of Millar’s humor.

On a side note, I started to wonder whether the ill-tempered Scottish groundskeeper MacGregor was the model for the Simpson’s Groundskeeper Willie. Like Willie, MacGregor resents many of his duties and expresses his resentment in passive-aggressive ways, like purposely burning the breakfast he doesn’t want to cook. Here’s the exchange when one of the guests offers to take over the cooking:

“Things got a mite burned,” MacGregor said with satisfaction, as he removed the apron and handed it to Turee. “It’s the will of the Lord.”

“It’s a funny thing that whenever the Lord picks something to be burned He chooses you as His instrument.”

In the mystery genre, as in romance, there are only so many plots to be explored. It’s the nature and the depth of the exploration that make a book worthwhile or not. This one happens to be about a group of friends who have drifted into middle age, whose lives have diverged in some ways, whose relationships have strained to accomodate wives and families. Sometimes that strain becomes too much, and as people spend a premium on maintaining social balance, all it takes a shock event to reveal the darkness beneath the surface.

Millar paints living characters in brilliant prose, and from those characters, she builds a complex world in which all the pieces fit together. The motives, strengths and weaknesses of each character play into the actions of the others, and all of it fits together into a rich whole.

Millar was a top-selling novelist in her day. Her husband, Kenneth, also a mystery writer, had to choose the pen name Ross MacDonald to avoid giving the impression that he was trying to ride to fame on her coattails. MacDonald is still widely read, but Millar isn’t, and that’s a shame, because she’s brilliant.