We Germans by Alexander Starritt

Alexander Starritt’s We Germans tells the story of a small group of German soldiers retreating from the disastrous invasion of Russia in 1944. The German soldiers on the Eastern front know the war is lost. Pursued by the ruthless Red Army, they’ve retreated a thousand kilometers on foot and are crossing the Polish countryside they destroyed years earlier, when they looked and felt invincible. 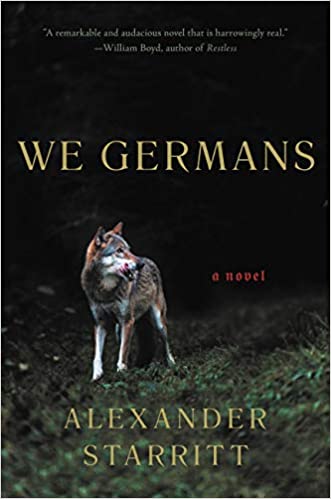 The main character, Meissner, was drafted into the war at age nineteen as an artilleryman. He spent four years fighting in Russia before the tide turned decisively against the Germans. Retreating and in defeat, he begins to contemplate the atrocities of the war in which he’s participated.

The war on the Eastern front has been more savage and brutal than the war in the west. Meissner describes how he and other soldiers, told to live off the land, terrorized the peasants, going into their gardens to dig up potatoes and buried pickles. If the peasants didn’t tell them where the food was, the Germans started lighting things on fire–the shed, the barn, the house–until they gave up the information. Then the soldiers took the food and left the homeless families to starve.

Meissner asks why a wealthy country like Germany with it’s fine houses and paved roads would want to take from a poor country that could barely feed itself. But he and his fellow soldiers take nonetheless, because war has stripped them of civility and reduced them to their animal needs. He feels the shame of what he’s doing, but goes through with it anyway because it’s a matter of survival, and because he knows that the Red Army and the partisans harassing the German retreat are just as ruthless.

“What reason was there for any of the war?” Meissner asks. “In every answer the logic of the details only disguises the madness of the whole. I do not believe a historian’s analysis can explain what we were doing there in that Polish wood. Versailles, totalitarianism–these are the mechanisms, but they still fall short of why we actually did any of this in the first place… I think part of it was obedience, that we allowed ourselves to be led into the abyss.”

Meissner notes that just because the soldiers didn’t know what they were getting into doesn’t absolve them for what they did.

“Oedipus didn’t know that his mother was his mother when he slept with her. But what he’d done was nonetheless abhorrent, and he was destroyed for it. There’s a pitiless truth in that. Shame is not like guilt. It’s not a matter of reparations… Shame can’t be atoned for; it’s a debt that cannot be paid.”

The power of this book lies in its richly detailed description of the war on the ground, its vivid portrayal of chaos and courage and depravity in a civilization that has disintegrated, pitting everyone against everyone. No dystopian fiction can conjure a more horrifying world.

The narrative includes both cinematic action and deep reflection. When the soldiers fight, when they witness atrocities and when they commit them, the experience for the reader is visceral. You feel their fear, their desperation, their anger and aggression, their tenderness. You see and hear the tanks and planes, the guns and screams. Starritt’s writing brings everything to life. Even the wayward pony that the soldiers adopt in their wandering has a distinct personality.

The power of Meissner’s reflections comes from the Starritt’s ability to convey the intensity of the war. Meissner isn’t a philosopher in an ivory tower playing with abstract ideas. His ruminations are a direct response to what he and the reader have just experienced together. His thoughts have the weight of reality, of the brutal physical world.

We witness with him the scenes that haunt him most: an entire village hanged in the branches of an enormous tree, a woman raped and crucified at the hands of the German military police, soldiers slaughtering their own officers just to get a taste of the champagne and sardines they’ve been hoarding.

The war, says Meissner, “showed me what life looks like when not distorted by hope, or pinned in shape by laws: a vast teeming featureless crowd where some suffer and some have happy lives, and there is no reason… There is no right and wrong but what we decide to live by, and no ‘fair’ except what people effortfully construct. And lastly, it’s all so, so fragile. Governments, banks, cities and houses, it’s all so much more fragile than you would believe, as easily blown away as dandelion seeds in the breeze.”

The book deepens as it goes on. In the end, we find the elderly Meissner trying to make sense of the life he’s lived, not just during the war, but afterward, when love and generosity were the guiding forces of his existence. The final pages provide a deeply human and humane reflection on a long and complicated life.

This is a powerful, haunting book. The best I’ve read all year, by a long shot.

Johnny Manic Cover Poll
What Do Digital Archivists Do?
The Hot Spot by Charles Williams
American Pain by John Temple
The Bestseller Code
Writing and Programming
On Being a Self-Published Indie Author
A New Cover for Johnny Manic