Kerry Cohen’s Loose Girl is a memoir of emotional need in which the author recounts the compulsive sexual promiscuity of her teens and twenties and the underlying feelings of loneliness and desperation that drove that behavior. I was friends with a few girls like her during my own teens and twenties, and I had no idea they were feeling any of the things Cohen describes. 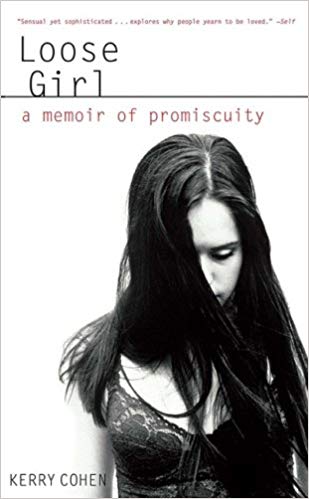 The value of this book lies exactly there, in her exposure of the underlying feelings and thought patterns that drive the behavior. Cohen, like the girls I knew, came from a damaged, dysfunctional family that left her with a damaged, dysfunctional psyche. It takes a confluence of conditions and events and timing, and perhaps an underlying susceptibility in a person’s innate disposition to produce the kind of compulsive behavior she describes, and she does a good job describing all of those factors.

Cohen now has a degree in psychology and counsels girls like herself. She notes that the psychological damage that led her to behave the way she did doesn’t simply go away, nor does the compulsion. Like a sober alcoholic, it’s simply something she has to acknowledge and manage. Her struggle, like the addict’s struggle, has been to reach a point of maturity in life where she understands the causes and effects of her behavior, and to develop the strength to choose the healthier path.

I recommend this book to everyone–to the girls and women out there who might not know that someone else was feeling exactly the way they did, and actually figured out how to say it. And to the guys who didn’t stop to think about the needs or desires of the person they were with.

The Greatest Hoax on Earth by Alan C. Logan
The Body Keeps the Score
The Girl with a Clock For a Heart
American Kingpin by Nick Bilton
In a Lonely Place by Dorothy B. Hughes
I Heard You Paint Houses
Bring Him Back Dead by Day Keene
Wanda Wiley: Coming November 1, 2019