The Woman in White by Wilkie Collins

The Woman in White opens with a mysterious encounter between artist Walter Hartright and an unnamed woman dressed entirely in white. Hartright runs into her late at night along the dark road from Hampstead Heath to London. The woman is clearly frightened, fleeing some unseen pursuer. She asks Hartright for directions, which he gives. He doesn’t know who she is, but his instinct tells him to help her. 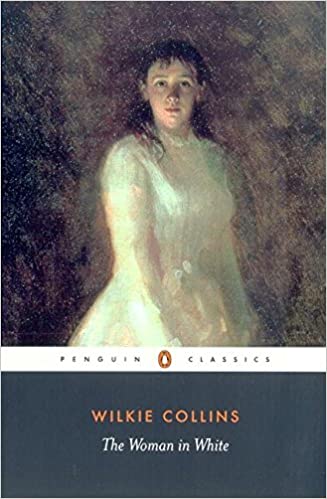 In her disconcerted ramblings, she tells him she had spent a brief portion of her youth in the country house he is planning to visit, and she warns him of an evil man he will soon encounter. After helping her on her way, Hartright eavesdrops on her pursuers: wardens from the insane asylum from which she escaped.

Although he knows she’s distraught and probably not in her right mind, he can’t entirely dismiss what she’s told him because she has correctly named the inhabitants of the distant house to which he is about to travel.

How’s that for a setup?

The great thing about Wilkie Collins at his best is that he sets the highest expectations in the reader and then exceeds them on every level. Here, as in The Moonstone, he’s at his best. The breadth, intricacy, and coherence of his plots are extraordinary, the quality of his prose is superb, his characters are vivid and alive, and the worlds he creates are richly textured and utterly absorbing.

As in The Moonstone, this story is told from multiple perspectives. In fact, it may be the first novel to be told by multiple narrators. The primary narrator, Hartright, makes a disclaimer up front, saying that the story will not be told in the usual novelistic form, but more in the form of a court case, in which each of the key players testifies in their own words about what they know.

Collins shows an extraordinary range of styles as each narrator has a distinctive voice and perspective. Two of the least likable characters, the cunning and evil Count Fosco and the whiny, selfish Mr. Fairlie, offer up the funniest narratives in the book. Before we get to hear their sides of the story, we have seen them both act heartlessly, inflicting cruelty in their various ways on poor, virtuous Laura Fairlie.

If these two were given a chapter to narrate in a contemporary mystery, the author would probably have them tell their story in nasty tones and malevolent terms to reinforce the reader’s hatred of them. But what, at bottom, allows one person to treat another heartlessly? In many cases, it’s a sense of arrogance, a sense that one is so far above the person they mistreat that the victim doesn’t matter and that all consideration is due to the perpetrator.

This kind of arrogance is ripe for satire, and when Count Fosco and Mr. Fairlie do finally get their turns to narrate, we see the story through their hilariously distorted perspectives. The way they see the world around them is disturbing, to be sure, but they’re so self-absorbed and so collossally egotistical you can’t help but laugh. These chapters are some of the funniest I’ve ever read.

The hardest thing about reading Collins is that the next book you read after his feels pale and thin. He truly was a master, and you can see in his works the pattern upon which almost all subsequent mystery and thriller writers built their work.

I won’t try to summarize this one. I’ll just say that if you’re looking for a deeply absorbing read in which to immerse yourself, put this on your list.

In a Lonely Place by Dorothy B. Hughes
Kill Romeo
Awareness by Anothony De Mello
The Ministry of Fear by Graham Greene
The Last Good Kiss by James Crumley
The Death of the Heart
I Married a Dead Man by Cornell Woolrich
His Master's Voice by Stanislaw Lem