Paul Bradley Carr’s 1414° is a satirical thriller that reads like Carl Hiaasen’s take on Silicon Valley, “An industry built on the promise of limitless memory, by people who can’t remember what happened last week.” 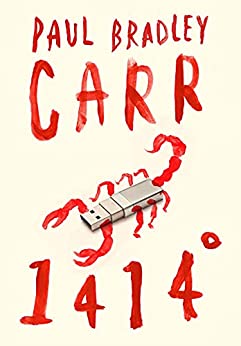 The book opens with former tech titan Joe Christian counting out his final hours in a filthy flophouse in San Francisco’s Tenderloin district. Someone, he is sure, has deliberately ruined his life. Someone he calls “Fate” has orchestrated his long descent from wealth and power to this sad, sordid end. But who is Fate?

The paranoid Christian pieces together handwritten notes and diagrams in a personal journal, beyond the reach of electronic surveillance. Brooding over his own cryptic scrawl, he has a revelation: his old friend Alex Wu, CTO of the massive Raum Corporation, will be Fate’s next target.

Raum is a catchall representation of Silicon Valley’s tech giants, an amalgam of Apple, Facebook, Google, Uber, and others. Their core product is the Raum Band, a bracelet that monitors your vital signs, blood chemistry, locations, and movement to predict what you’ll want next and then provide it for you.

Need a ride somewhere? Raum knows that before you do. Step outside and you’ll find a vRaum car waiting. Hungry for pizza? Raum’s nearby kitchen is putting together your favorite toppings before you even place the order. The company “built on the obliteration of privacy” monitors everything, feeding your personal data into an algorithm that guides and manages your life.

As the dying Joe Christian makes his way to Raum headquarters to warn Alex Wu to beware of Fate, journalist Louise “Lou” McCarthy, a reporter on the tech beat for The Bay Area Herald, is debating whether or not to publish a story detailing rape allegations against Wu. The story came from a trusted source, and includes documentation, but McCarthy can’t yet verify it. In her years at The Herald, she has become increasingly critical of the tech industry’s “brociopath” culture, which consistently excuses the bad behavior of powerful men and rewards them with enormous riches.

Joe Christian’s insistence that someone else is ruining his life epitomizes the mindset that McCarthy can no longer tolerate. Christian ruined his own life, quite publicly, by having an affair with a teenage intern, wrecking his marriage, running his business into the ground, and blowing all his money on booze and drugs. But it’s impossible for him to imagine that his current condition is the result of his own actions. If bad things happen to him, it must be someone else’s fault. Seen through the lens of lifelong entitlement, he is the victim of injustice, not the agent of his own self-destruction.

McCarthy sees Wu as a brociopath in the mold of Christian, another powerful tech leader who will never be held to account for his actions. As her friend says later in the book, “I’ve spent years studying these assholes, and I know the only way they change their behavior is if they lose.”

McCarthy has her own personal beefs against Raum Corporation. The company bought up all the affordable housing in her old neighborhood, evicted everyone, and erected their new multi-billion dollar headquarters, Raum One, on the spot of her razed rent-controlled sublet. McCarthy now lives under her desk at The Herald.

She decides to publish her story, outing the powerful CTO as a rapist, and is immediately attacked on social media by the right-wing trolls of the #MensLivesMatter movement. In an ironic twist, and an excellent example of Carr’s satire, when the trolls want to send an angry mob to McCarthy’s house to terrorize her, they can’t find her address in any online records. This exemplar of responsible, truth-seeking journalism is homeless because she can’t afford rent in the city she serves.

1414° works well as a mystery/thriller. No one in the large cast of characters is quite who they seem, and as Lou McCarthy’s hunt for the mysterious “Fate” takes a number of unexpected turns, we find that all of the disparate characters are tied to each other either by a common past or common financial interest. In the Valley, one character observes, “everyone in a position of power seemed to have gone to school with everyone else.”

The pace never flags, and the satire is often hilarious, even as it makes you cringe. When CTO Alex Wu inspects his company’s new smart car, his engineers urge him to delay the launch because the car’s self-driving technology can’t recognize dark-skinned people. Wu, the embodiment of Silicon Valley greed and recklessness, insists they launch anyway, because hey, there’s money to be made NOW!

Wu, who himself has brown skin, is promptly run over by his own car, which doesn’t recognize him as human. Does he learn his lesson? No, but he and Raum Corp. stand to reap billions on their invention.

Like Hiaasen, Carr is a journalist who spent years covering the people he mocks in his fiction. His detailed observations ring true because they come from first-hand experience. The seed of the plot comes from a real-life incident in which a powerful tech company threatened to ruin a Bay Area journalist for exposing the company’s culture of toxic sexism.

As McCarthy’s intrepid investigation brings her ever closer to the elusive power that hounded Joe Christian and Alex Wu to suicide, she begins to understand that Fate has a larger plan. Punishing a few bad apples only treats the symptoms of a corrupt and rotten system. The cure lies in the destruction of the system itself. Like Raum’s algorithms that can predict users' desires before they’re even aware of them, Fate has a way of anticipating people’s actions and nudging them toward its pre-ordained decisions.

Caught between two overwhelming forces, Lou McCarthy ultimately has to make a choice: join forces with Fate and risk her life to root out evil, or yield to the mighty Raum Corporation and salvage what’s left of her life and career.

As in Hiaasen’s novels, Carr’s plotting and satire can sometimes be over the top. This is deliberate, and the scary thing about the author’s exaggerations is that they all look like the next logical step from today’s reality. Where Hiaasen tends toward mocking humor, Carr occasionally strays into seething hostility, which can leave a bitter taste at times.

Entertaining from cover to cover, 1414° is an excellent read, both as a thriller and as a brutally funny and frightening commentary on the reckless tech juggernaut upending our world.

You can learn more through the links below. This site is not an affiliate and does earn any referral fees.

The Door by Magda Szabo
Irrational Man by William Barrett
The Late Monsieur Gallet
Collected Millar: The Master at Her Zenith
The Deep Blue Good-By
Dopefiend by Donald Goines
(Low)life by Charles Farrell
His Master's Voice by Stanislaw Lem