Ordo, a novella of just 73 pages, is the second work in Hard Case Crime’s Double Feature. Ordo Tupikos, a sailor in the US Navy in the early 1970s, is enjoying some down time with friends during a work break. One of them asks him why he never told them he had been married to movie star Dawn Devayne. 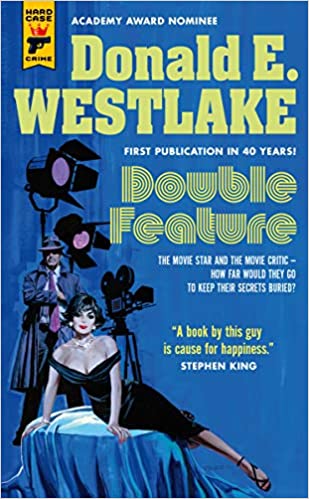 Ordo thinks his friend, a practical joker, is kidding, so he brushes him off. But the friend is serious. He shows Ordo a magazine article about Devayne, in which she describes her life before Hollywood. The article mentions her early marriage to Ordo, and includes a photo of them on the courthouse steps just after they’d taken their vows.

The girl he married was named Estelle Anlic. She was sixteen at the time, though she had lied to him and to the court about her age, claiming she was nineteen. The marriage was annulled after three months, with Anlic’s domineering and abusive mother swooping in to reclaim her.

Ordo is a simple man who asks little from life and is content with what he gets. He studies the photo of the girl he married and can’t get over the contrast between her and the confident, glowing star, Dawn Devayne.

He looks at himself in the mirror, noting that he looks almost identical to the man in the sixteen-year-old wedding photo. How, he asks, can she have changed so utterly while he has remained the same? How can the famous star show no trace of the girl he married?

The question burns so strongly that Ordo takes all his remaining leave and half his bank account and travels across the country to see her. He gets in touch with her through her agent and soon arrives at her house. The two pick up their relationship where they left off, somewhat to Ordo’s surprise.

One of Dawn’s friends remarks that while Dawn had left each of her other three husbands, Ordo had been taken from her. He was her first love, and she has a soft spot for him.

But this is not a romance, and the reader and Dawn and Ordo all know this fling won’t last long. Nor does Ordo want it to. He didn’t go to Hollywood to rekindle an old romance. He went to answer that burning question: How does a person change so utterly that no trace of their old self remains?

Dawn takes Ordo on set while she films. She takes him to dinners and parties, and we get from Ordo a clear-eyed, plain-spoken view of Hollywood. He doesn’t judge, nor does he envy. He merely reports.

His first report comes from a grocery store in Hollywood, soon after his plane lands:

There were some people in there, not many. I noticed something about them. They were all dressed up in suede and fancy denim, like people in a terrific party in some movie, but they were buying the cheapest of everything. Their baskets were filled as if by gnarled men and women wearing shabby pants or kerchiefs, but the men were all young and tanned and wearing platform shoes, and the women were all made up with false eyelashes and different-colored fingernails. Also, some of them had food stamps in their hands.

Another thing. When these people pushed their carts down the aisles they stood very straight and were sure of themselves and on top of the world, but when they lowered their heads to take something off a shelf they looked very worried.

Dawn, he finds, is like these people in the grocery store, dressed up like someone in a terrific party, straight and sure of herself and on top of the world. Her life, in fact, is a terrific party, and her confidence and self-assurance, propped up by fame and wealth, are unshakable.

She has so thoroughly become the persona she projects, Ordo can’t see past it. Until one night when another character from their past shakes her confidence. She slips at last, Ordo sees the girl he married–a girl trying desperately to escape a cruel and unbearable life–and he is finally able to answer his question. How does a person change so thoroughly from what they were? They make it happen, as Dawn’s friend points out. Will all their will and all their energy, they make it happen.

With his plainspoken manner and compassionate insight, Ordo puts it more poetically that I have, and Dawn’s plight becomes deeply moving.

Ordo has never wanted to be anyone other than who he is. He goes home content, and resumes an unglamorous life from which he asks little and still manages to find fulfillment.

This book is not like any of the other Westlake books I’ve read. It manages to be readable, compelling, and literary all at once. It’s an excellent counterpoint to the comic crime story, A Travesty, which makes up the first half of Double Feature.

The Art of the Cover Letter
I Was A Spy by Marthe McKenna
The Stepford Wives
Discover Great Reads on Shepherd.com
Pimp by Iceberg Slim
Loose Girl by Kerry Cohen
The Listening Walls by Margaret Millar
A Touch of Death by Charles Williams