Devil in a Blue Dress

Devil in a Blue Dress is the first installment in Walter Mosley’s Easy Rawlins series. The story opens in Joppy Shag’s near-empty bar above a butcher shop in Watts, Los Angeles. The time is 1948. Easy Rawlins, just fired from his manufacturing job at Champion Aircraft, is having an afternoon drink, wondering how he’s going to cover his next mortgage payment, when a white man walks in and makes him an offer. 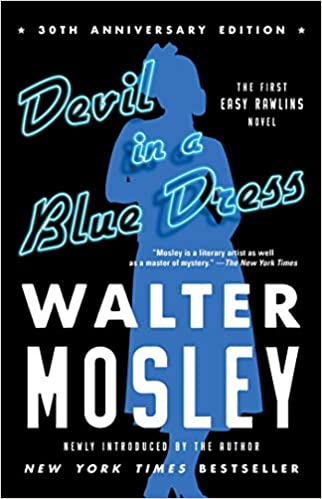 DeWitt Albright, with his pale skin, white suit and strawberry blond hair doesn’t seem to care if he looks out of place in this scene. He offers Rawlins cash up front to find a missing woman, the devil in a blue dress who’s been known to frequent the same dive bars and jazz clubs that Rawlins himself hangs out in.

Rawlins has some reservations about this man and his offer. But he’s broke and he doesn’t want to lose his home, so he takes the job.

Mosley’s book provides a tour of post-war black Los Angeles. The reader gets to see the same town Raymond Chandler wrote about, from the other side, and from a writer who is just as talented and observant.

Racism in 1948 was raw, overt, and direct; not duplicitous and papered over with false pleasantries like it is today. Rawlins is always on guard against the humiliations of a hostile white world. He has to stand up for his dignity in situations where a white detective wouldn’t have to think twice. He must constantly defend himself against a world that wants to put him down, and this adds a dimension to his character and to the story that simply doesn’t exist in Chandler’s works.

Rawlins is resolute, a fighter in an all-around bad situation who refuses to go down. DeWitt Albright turns out to be a truly nasty character. Somehow, people associated with Daphne Monet, the devil in blue dress, keep turning up dead. The cops don’t know why, but because Rawlins was following her, he becomes a suspect and then has to put up with their relentless harrassment.

As things go from bad to worse, the tougher, darker side of Rawlins that he had tried to leave behind returns to save him. Before the war, he got in enough trouble in Houston to want to leave that city forever. During the war, he fought in Europe, killing as necessary just to survive.

He never wanted to be that person, and his enemies don’t seem to know he has it in him. But if you put a man in a bad enough position, he has to fight for himself.

As a mystery, this one becomes quite complex. There are many characters to keep track of, numerous betrayals and false identities. You may have to read some of the final chapters twice to get it all straight.

But the world Mosley paints so richly lingers long after you finish the book. The world of life at the bottom in post-war Los Angeles where everyone is struggling to survive is one you don’t often find in novels. In a neighborhood where traditional American crime writers would roll up the windows, lock the doors, and drive through as quickly as possible, Mosley parks the car and takes you inside the homes, the bars, the barber shops and corner stores where all the life is being lived by all the people society taught you not to see.

If you read this one and you like it, check out Donald Goines' Dope Fiend and Iceberg Slim’s Pimp.

Night Has a Thousand Eyes by Cornell Woolrich
The Listening Walls by Margaret Millar
Black Money by Ross Macdonald
No Room at the Morgue by Jean-Patrick Manchette
Initial Cover for The Friday Cage
RadCity 4 vs. Bafang 750 Watt Mid-Drive Kit
I Heard You Paint Houses
So Nude, So Dead by Ed McBain