Solaris is a planet in a distant galaxy that orbits two suns. The laws of physics say that the planet should have been swallowed up by one of the suns as gravity drew it closer and caused the orbit to descend. Curious as why this hasn’t happened, scientists from Earth send satellites to observe the planet. 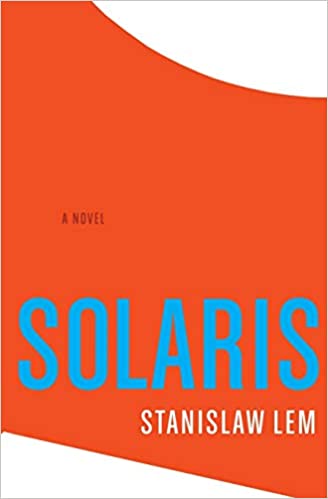 The satellites find that Solaris is covered entirely by a vast sea, and this sea moves against gravity when it needs to, in order to affect the orbit of the planet. This is what keeps it from falling into the sun. Curious, the Institute back on Earth sends a number of manned expeditions to study Solaris' mysterious sea.

The sea, which is made of a kind of plasma, not only moves of its own accord, it creates vast, intricate architectural structures the size of mountain ranges. Some of these are symmetrical down to the smallest detail. It also creates “mimoids,” which are shapes that resemble objects outside itself. Some of the early expeditions found that the sea had made crude replicas of the instruments the scientists had left behind.

When the book opens, Dr. Kris Kelvin (the narrator) is just arriving at the only manned station on the planet. He finds that one of the three scientists on the base has killed himself, and the other two seem to have gone mad.

Kelvin finds that the sea, which seems to be capable of creating anything, and which creates without any discernible purpose, has begun to read the minds of the scientists, and to create living beings whose images it has dredged up from deep within their brains. The sea finds in Kelvin’s mind a long dead lover, the memory of whom is laced with sorrow, longing, and regret. The sea rebuilds her, and presents her to him exactly as she was.

I won’t spoil how all that plays out, but Kelvin’s lover, like some of the others on the station, is created fully-formed, like Aphrodite, and doesn’t know how she came to be where she is, though she does know Kelvin and is deeply attached to him. At one point, one of the other scientists, speaking to Kelvin about his lover and the other similar creatures on the station says, “In a certain subjective sense, they are human. They know nothing whatsoever of their origins. You must have noticed that?”

And what do we know of our origins?

What sets this book apart from other space exploration sagas, and from mystery and horror, is its depth. This isn’t just an entertainment, it’s a deep philosophical exploration of the limits of human knowledge, of our place in the universe, of what constitutes life and intelligence, of creation, meaning, meaninglessness, and death. It also touches on themes of how our scientific idealism is colored by hubris and a desire to colonize. As Dr. Snow puts it, “we don’t want to enslave other races, we simply want to bequeath them our values and take over their heritage in exchange.” Isn’t that the legacy of colonialism?

One chapter covers the evolution of scientific thought about the planet, and how that thought, over the decades, follows a pattern similar to Western cultural evolution, with early attempts to anthropomorphize, followed by periods of rationalism, romanticism, etc.

At one point, early in the study of the planet’s sea, scientists were convinced “that they were confronted with a monstrous entity endowed with reason, a protoplasmic ocean-brain enveloping the entire planet and idling its time away in extravagant theoretical cognition about the nature of the universe. Our instruments had intercepted minute random fragments of a prodigious and everlasting monologue unfolding in the depths of this colossal brain, which was inevitably beyond our understanding.”

The literary establishment, the big publishers and critics, have often looked down on genre fiction in general, and sci-fi in particular, as forms of entertainment that value cheap thrills and sensationalism over good writing and deep insight. This book is both great sci-fi, and great literature. Not only does it build a fascinating alternate world, it explores with unusual intelligence, sensitivity, insight, and depth a range of ideas that many of the most celebrated “literary” novels don’t even attempt to consider.