The Ministry of Fear by Graham Greene

This book, set in London in 1941 during the blitz, begins with a man on the outs, Arthur Rowe, strolling through a church fair fundraiser. He plays a few penny games, then has his fortune told. By a stroke of bad luck, he utters the wrong words to the fortune-teller. In exchange, she tells him the weight of the cake in a nearby stall. Whoever guesses the weight correctly, wins it, which is a big deal, because it’s made with real eggs, which are a prized rarity in wartime London. 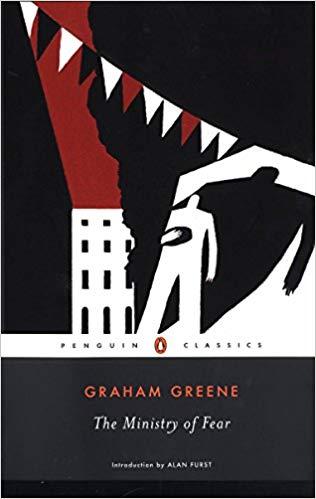 Before he leaves the fair, Rowe is intercepted by a number of people who want to buy the cake, but he stubbornly refuses their insistent offers.

Back at his rented flat, the landlady points out that the weight he guessed could not have been correct. She puts the cake on the scale to prove it, then cuts a slice for him to enjoy with his tea.

Soon a new boarder shows up. He’s hungry, and seems to be more interested in the cake Rowe shares with him than in Rowe himself or the tea they drink together. Rowe recognizes the odd taste in the tea the stranger has poured for him. It’s the same poison Rowe used to kill his wife years earlier. That crime, which he committed out of pity for her failing health, and for which he was convicted, has haunted him for years.

Perhaps if they had hanged him he would have found excuses for himself between the trap door and the bottom of the drop, but they had given him a lifetime to analyze his motives in.

He remembered himself twenty years ago daydreaming and in love; he remembered without self-pity, as one might watch the development of a biological specimen. He had in those days imagined himself capable of extraordinary heroisms and endurances which would make the girl he loved forget the awkward hands and the spotty chin of adolescence. Everything had seemed possible. One could laugh at day-dreams, but so long as you had the capacity to day-dream, there was a chance that you might develop some of the qualities of which you dreamed… Since the loss of his wife, Rowe had never day-dreamed; all through the trial he had never even dreamed of an acquittal. It was as if that side of the brain had been dried up; he was no longer capable of sacrifice, courage, virtue, because he no longer dreamed of them. He was aware of the loss–the world had dropped a dimension and become paper-thin.

Though the crime and its effect on Rowe’s psyche tinge the story with a dimension of weight and darkness on top of the war and the blitz, Greene finds humor in the situation. For example, while Rowe’s friend Henry Wilcox stands by him even after the conviction, Mrs. Wilcox hates him. “Once a man starts killing his wife, she would have ungrammatically thought, you couldn’t tell where it would stop.”

Ironically enough, the stranger who has come to kill him and German bombers trying to blow him up become the first steps in freeing Rowe from the past he can’t stop brooding over.

Greene divides the story into four short books, each told in third person from Rowe’s perspective. Each begins in a new setting, just before or just after a major event, and much of the story’s suspense comes from the reader trying to figure out, along with Rowe, where he is and how he got there, who are his friends, who are his enemies, and how he will extract himself from troubles he doesn’t fully understand.

The story is ostensibly a high-stakes spy thriller, with the main character inadvertently wrapped up in some intrigue that will affect his country and the outcome of the war. But on a deeper level, it’s the story of a sort of everyman trying to come to terms with maturity and the complexities of a world where in which life didn’t go as he had planned.

Halfway through the book, Rowe becomes a different person. His past is wiped away, and he finds himself at last getting the chance to be the hero he always wanted to be, as he tries to expose a cabal of Nazi partisans inside England, a group he comes to call “The Ministry of Fear.”

Later in the book, as he finally pieces together his past and present, “The Ministry of Fear” comes to mean something entirely different. It’s personal now, and has nothing to do with nations or politics or war. This is the main twist of the book (which I won’t give away). In the parallel dramas unfolding within and around the story’s hero, it’s the inner drama that matters in the end. That’s the one that will change him, that he will carry with him, and that he will build his new life upon.

In childhood we live under the brightness of immortality–heaven is as near and actual as the seaside. Behind the complicated details of the world stand the simplicities: God is good, the grown-up man or woman knows the answer to every question, there is such a thing as truth, and justice is as measured and faultless as a clock. Our heroes are simple: they are brave, they tell the truth, they are good swordsmen and they are never in the long run really defeated. This is why no later books satisfy us like those that were read to us in childhood–for those promised a world of great simplicity of which we knew the rules, but the later books are complicated and contradictory with experience…

Like all of Greene’s novels, The Ministry of Fear is a book you can find new meaning in each time you read it. It’s well-plotted, well-written, and shows the insight of a deeply observant and reflective mind. It is not a simple story of a simple hero standing on the right side of a clear moral line. It’s complicated, but completely in line with an intelligent adult’s mature experience of a complex world.