Vernon Subutex One by Virginie Despentes

I received the UK edition of this book as a gift a few months ago (it won’t be published in the US until later in 2019). I twice tried to start it, and twice put it down after a few pages thinking, “I can’t read this. This reminds me of the most depressing parts of the DC punk scene back the eighties and early nineties, the guys who spent their last dollars on beer instead of heating their apartments. This is about the ones who didn’t grow up.” 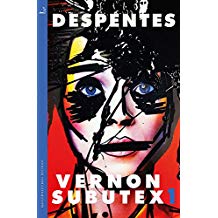 The third time I picked up the book, I read random pages from the middle, and I was hooked. The author, Virginie Despentes, is a phenomenal writer with an extraordinarily deep and perceptive mind, and an almost unparalleled ability to portray the minds and experiences of a broad cast of very different people. I went back to page one, read the book all the way through, and came away thinking this is one of the best novels I have read in many, many years.

Vernon Subutex is a former record store owner, now out of work and out of options. When the book opens, he’s scrounging tobacco from last night’s cigarette butts to roll into his morning smoke. His unemployment benefits have run out, he’s about to be evicted from his apartment, and his benefactor, the rock star Alex Bleach, has just died.

Things go downhill from there.

Some, like the writer Xavier, have moved into traditional roles and become bitterly reactionary, self-centered, or self-pitying. Others, like the Hyena, adapted to a harsh and cynical world. Still others, like Pamela Kant, gave up on trying to fit in to a society that never did and never would accept them. Many, like Vernon, are just trying to find their way with ever fewer resources, fewer opportunities, and less energy.

In fact, an encounter near the end between the haughty right-wing Xavier and the homeless Olga illustrates the encounter between the reader and the text. Xavier crosses the street to talk to Vernon, who sits beside Olga, begging in front of a supermarket. Xavier has no intention of speaking with, or even acknowledging Olga, whom he finds disgusting. He crouches down in front of Vernon, close enough so that he doesn’t have to see Olga.

Olga, unbidden, talks to Xavier about the dog that was cruelly taken from her. Xavier too has just lost a dog, and has been too hard, too bitter to mourn. Olga’s eloquent expression of grief hits a nerve, takes him by surprise, and allows him to finally feel the extent of his loss. Along with his recognition of their mutual reactions to a shared experience comes a surprise recognition that this woman is not some repulsive “other,” but merely another version of himself in another context that terrifies him. This is himself as a woman at the midpoint of a life in which everything went wrong, in which he ceased to matter and lost all protection from the indignities and brutality of a society in decay.

Throughout the book, Despentes seems to say, “Let me show you the tawdriness, the ugliness of what you so love to despise. This is you. It’s ugly, isn’t it? But are you willing to see the beauty in it? Because it’s there if you look.”

This is where Despentes differs vastly from so many American writers. American readers seem to demand that characters whose political values or moral outlooks are opposed to their own be portrayed as unlikable and be condemned by the author. Despentes simply pumps her world at the reader through a fire hose and leaves it to you to figure out how you feel.

What comes out of that hose, like real life, is a mix of the good, the bad, and the ugly. What makes this book so good is its unflagging intensity, the scope and breadth of the world it portrays, its clear-eyed and justified rage, its untender appreciation of beauty. You can’t imagine that an author can convey such depth and poignancy writing to the machine gun beat of eighties punk, or that she can break your heart without an ounce of sentiment. But she does it. After three hundred and fifty pages of vivid writing that challenges you to think and feel, to revisit and re-evaluate perspectives you thought had settled, Vernon’s final descent into homelessness, when he suddenly identifies with the entire catalog of outcast humanity, is one of the most moving passages in all of literature.

I really hope this book finds an audience in the US when it comes out this fall.