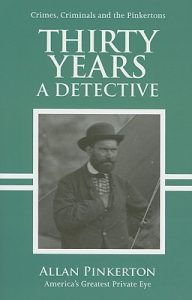 Although this is by no means a great book, it is well worth reading as a historical document. The book is not a biography or autobiography of Allan Pinkerton. If you want that, look elsewhere. It is a fascinating description of the practice of crime in 19th century America.

This book’s main flaws are 1) it often reads like advertising or even propaganda for the abilities of the Pinkerton agency to thwart crime and protect moneyed interests, and 2) the prose is wordy and overwrought, even by 19th century standards.

There is more than enough interesting material in here to excuse both of those flaws. As one Goodreads reviewer notes , Pinkerton (or his ghostwriter) tends to write that many of the criminals in this book were geniuses, or somehow super-criminals. Actually, many of them were, which is why they’re included in this volume. If the book described the cat-and-mouse game between smart, resourceful detectives and crude, run-of-the-mill criminals, it wouldn’t be too interesting.

There’s an entire chapter on “burglars,” which in this book refers specifically to those who crack bank safes (as opposed to typical house burglars). Of the safe-breaker, Pinkerton says:

…experience has demonstrated beyond question that he is possessed of more than ordinary mechanical knowledge, and that his energy and patience are phenomenal. Nor is there any reason why this should not be so. The burglar is trained to his vocation by the hardest discipline known to man.

Pinkerton goes on to say:

So exceedingly proficient have many of them become in the art of safe-opening, that I have known of more than one instance where burglars have been taken from their prison cells to open safes and vaults whose owners have forgotten the complicated combinations…

The “safe-openers” of the 19th century were akin to the hackers of the 21st century. They had to outwit the most sophisticated security designs of the cleverest minds of the era. But unlike today’s hackers, they had to do their work onsite, in the dark, almost always between the bank’s closing on Saturday evening and when its reopening on Monday morning.

Like today’s best hackers, the safe-openers worked with a set of specially-made tools, often of ingenious design, and many of which they built by hand specifically for the task. The best of these criminals carefully studied safe manufacture and design, knowing that they could defeat the security of the safe only by attacking it at its weakest point. Pinkerton provides illustrations and descriptions of some of these tools, and describes how they were used in specific heists.

A number of bank burglaries described in the book depend less on cleverness than on perseverance. Sometimes burglars, like hackers, ignored the obvious point of attack and found a way into the vault that no one would have ever anticipated. (If you’ve seen the film Sexy Beast , you’ll have an idea of how this type of burglary works. It depends on tremendous audacity, patience, and perseverance.)

The book also contains a long chapter on counterfeiting, which describes a number of fascinating characters. Counterfeiters are by nature patient, subtle, wily, wary, detail oriented, and highly skilled. Compared with common thieves, who rip people off one at a time, counterfeiters operate on a huge scale, and by the time anyone recognizes that false currency is in circulation, the perpetrators are gone.

Thirty Years a Detective is most interesting as a description of how crime was practiced in the 19th century, and how it was detected. In this book, as in The Expressman and the Detective, Pinkerton shows that there is a fine line between the top-notch detective and the top-notch criminal. Both are deceptive and elusive. Both employ similar tactics to case their targets. Both are preoccupied with the questions “How does one deceive an honest citizen?” and “What weaknesses in the system can I exploit for gain?”

The criminal works forward from these questions to engineer his crime. The detective works backward to figure out what was done, how, and by whom. The criminal merely has to commit the act. The detective has the much tougher job of proving it was done, who did it, and how. In this book and in others, Pinkerton admires and laments the misapplied genius of his toughest adversaries, and it really is an interesting read.

Why I've (Mostly) Stopped Reading the News
Target: The Girl
Irrational Man by William Barrett
The Girl with a Clock For a Heart
The Three Stigmata of Palmer Eldritch
Red Harvest by Dashiell Hammett
The Coddling of the American Mind
The Plains of Cement by Patrick Hamilton

North and Central by Bob Hartley
Loose Girl by Kerry Cohen
No Country for Old Men
The Wisdom of Insecurity by Alan Watts
Chasing Phil by David Howard
Collected Millar: The Master at Her Zenith
A Touch of Death by Charles Williams
Impala Wins Gold in Reader's Favorite Book Awards