Jim Thompson sure can be bleak. Cropper’s Cabin takes place in the author’s home state of Oklahoma, in the 1940s or early fifties. Tommy Carver is the son of a mean-spirited, resentful sharecropper who is barely getting by. 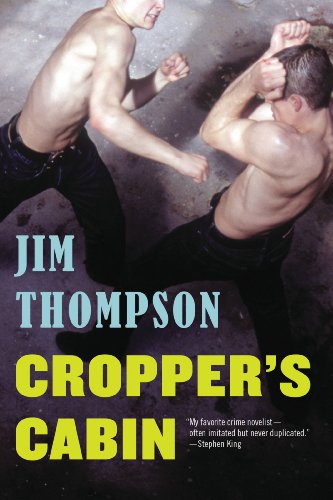 Tom is a bright student in his final year of high school. He’s a favorite of his teachers and of the school principal. His girlfriend, Donna Ontime, is the beautiful daughter of the county’s richest man, a Creek Indian who owns the thousands of acres surrounding Tom’s father’s ten-acre plot.

While Tom is reduced to scrounging food out of the garbage cans at school, Donna drives a Cadillac. The two are truly in love, but Tom can’t let anyone know he’s seeing her. His father envies Donna’s father for his wealth, and hates him for his Indian blood and for preventing him from selling the oil rights to his land.

The senior Carter is the kind of small man who blames everyone else for his problems, who strangles the hopes and spirits of those around him because, if he can’t get ahead, he wants to make sure no one else does either. He is the ruthless and dominating presence in the small home that includes his Tom and his adopted sister, the thoroughly defeated Mary, whose resignation shows in her stooped posture, her inability to look people in the eye. She can’t speak for herself or stand up to anyone because the old man has systematically starved her spirit, beaten down all her hopes and destroyed her self-esteem.

In the first half of the book, Tom begins to see his situation and his father more clearly. He knows he must get away from this place if he wants to have any shot at a decent life. He confronts his father directly about the sins Tom knows the old man has committed–and they are bad ones, so deeply shameful and appalling that the old man is unable to respond with his customary violence.

Tom says this will be his last night in the cabin. Tomorrow he’ll leave for good.

And he does, but not the way he had planned. The old man has one more nasty trick up his sleeve, one last trump card to keep his boy from making anything of himself.

Tom’s life gets a whole lot worse overnight, and then, when the few good people in his life step in to help him, he has to make a wrenching choice: ruin Donna’s life and reputation or die.

Every time you think Tom Carver’s life can’t get worse, it does, and much of his trouble comes from his own decisions, from the bitterness and stubbornness bred into him by years of hardship.

This is one of Thompson’s earlier novels, and it has some rough edges. Carver isn’t quite as eloquent as some of Thompson’s later anti-hero protagonists. There are a few spots in the book where you don’t really know what he’s thinking or feeling because his language is too vague and open-ended.

The heart of this story is the battle going on inside of Tom Carver. While his home life has been a catalog of privation, violence, cruelty, falsehood, manipulation, and abuse, the few good people in his life have recognized and responded to the goodness in him.

While the bad has been driven into him relentlessly, the good comes only here and there. Flashes of kindness and respect, gestures of goodwill, affection and dignity show up in his life like tiny stars in an infinite, fathomless sky of black.

Which force will gain the upper hand? Tom himself doesn’t know.

Toward the end of the book, as makes his way across a dark November field, bent on revenge, he reflects:

I’d always liked the fall of the year, better even than the spring. I know it seems like a dead season to some people, with the green things gone or going and the land hard and tired-looking and birds kind of quiet and soft-singing. But it’s never seemed that way to me at all. Me, well, I’ve never really felt that the green is gone. It’s there, right in the fields it came out of, and it’ll be right there when spring comes again, all rested and shined up prettier than ever.

The land, now, well I’ll tell you about that. It’s done a good job, as good as it was able to, anyway, and it’s got a right to look tired. It’d be pretty upsetting if it looked any other way. Yes, and the hardness is all right, too. It’s been through something pretty hard, and some of that hardness was bound to rub off. And sometimes a frown sets a lot better with you than a smile. Something that’s taken a beating, you don’t want to see it laugh. And just because it’s stopped laughing doesn’t mean it’ll never laugh again.

He’s describing himself, though he doesn’t know it at the time, and neither does the reader.

In all of Thompson’s crime novels, as in Greek tragedy, character is destiny. Most of his protagonists wind up in graves they’ve made themselves, through stubbornness, pride, arrogance, spitefulness and hubris. This is one of the few that doesn’t end in absolute darkness. As hard as the land looks, the green is still in it, waiting only for its season to return.

Mutant Message Down Under
The Coddling of the American Mind
Q and A: On Writing
Ordo, by Donald Westlake
Ireland, June 2016
Devil in a Blue Dress
Awareness by Anothony De Mello
The Comedians by Graham Greene