The Wisdom of Insecurity by Alan Watts

It’s hard to write of a review of Alan Watts' books because there’s so much in them. It’s like trying to summarize the ocean. Each time I re-read one of his works, I come away with something different. So I’m not going to try to encapsulate all that Watts says. Instead, I’ll just described what impressed me in this reading, using mostly Watts' own words, since he can express himself better than I can paraphrase him. 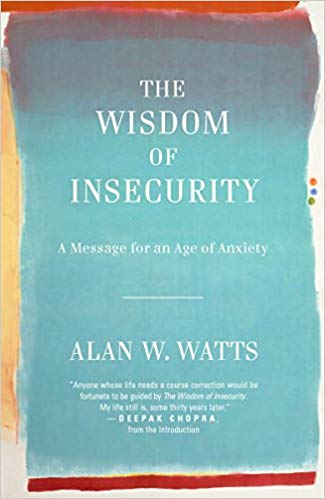 If you want a full summation of the book, Watts gives it succinctly in the last two sentences of the final page:

Life requires no future to complete itself nor explanation to justify itself. In this moment it is finished.

By “finished,” he means not ended but complete, as a completed work of art requires no additional gloss or explanation. Watts spends most of the book showing how both science and religion attempt to supply this additional gloss, and how their systems of thought often wind up replacing the reality they are meant to explain.

That there is a way of looking at life apart from all conceptions, beliefs, opinions, and theories is the remotest of all possibilities from the modern mind. If such a point of view exists, it can only be in the brain of a moron. We suffer from the delusion that the entire universe is held in order by the categories of human thought, fearing that if we do not hold to them with the utmost tenacity, everything will vanish into chaos.

In holding so tightly to a system of understanding, whether it be scientific, religious, economic, or political, we lose touch with reality. The mental constructs we’ve created to understand, predict, and manipulate the world prevent us from actually seeing it.

Ordinarily, [the basic principles of philosophy, religion, and metaphysics] are used as attempts to stand outside oneself and the universe to grasp them and to rule them… The powers of technology have availed for little save to speed the process to a point of unbearable tension… If scientific thought has weakened [religion’s] power we need have no regrets, for the “God” to which it could have brought us was not the unknown Reality which the name signifies, but only a projection of ourselves–a cosmic, discarnate “I” lording it over the universe.

The true splendor of science is not so much that it names and classifies, records and predicts, but that it observes and desires to know the facts, whatever they may turn out to be… In this openness and sincerity of mind it bears some resemblance to religion, understood in its other and deeper sense. The greater the scientist, the more he is impressed with his ignorance of reality, and the more he realizes that his laws and labels, descriptions and definitions, are the products of his own thought…

What he does not know seems to increase in geometric progression to what he knows. Steadily he approaches the point where what is unknown is not a mere blank space in a web of words but a window in the mind, a window whose name is not ignorance but wonder.

The timid mind shuts this window with a bang, and is silent and thoughtless about what it does not know in order to chatter the more about what it thinks it knows. It fills up the uncharted spaces with mere repetition of what has already been explored. But the open mind knows that the most minutely explored territories have not really been known at all, but only marked and measured a thousand times over. And the fascinating mystery of what it is that we mark and measure must in the end “tease us out of thought” until the mind forgets to circle and to pursue its on processes, and becomes aware that to be at this moment is pure miracle.

There’s quite a bit overlap between Watts' book and Anthony De Mello’s Awareness. Both authors have a deep knowledge of Eastern and Western religion, and both have a strong mystical bent, arguing persuasively that experience and language’s representation of experience cannot ever be the same thing. As we come to dwell more and more in the latter, in the conceptual world, we have less and less visceral experience.

Watts spends much of the book describing how our attempts to avoid pain are themselves the source of great pain. If something hurts, it hurts. But if, during the hurt, we add to it an insistence that the world not be hurtful, that it be something other than it is, we simply compound the hurt with psychological discord and strife.

In The Varieties of Religious Experience, William James remarked:

A strange moral transformation has within the past century swept over our Western world. We no longer think we are called on to face physical pain with equanimity. It is not expected of a man that he should either endure it or inflict much of it, and to listen to the recital of cases of it makes our flesh creep morally as well as physically. The way in which our ancestors looked on pain as an eternal ingredient of the world’s order, and both caused and suffered it as a matter-of-course portion of their day’s work, fills us with amazement.

Watts notes how much of today’s world is engineered to try to guarantee certainty, to guarantee a future that is predictable and known, and if not pleasurable, at least comfortable and free from pain. When the world turns out not to go the way we expected, we have to endure the pain of that, plus the emotional strife of being surprised, disappointed, and slighted. Illness, misfortune, and death are no longer part and parcel of existence, they are injustices and we are their victims.

Both Watts and William James point out that when a mind rejects suffering and death as natural parts of life, it can only justify these them by creating a beneficent father figure whose loving plan is beyond our understanding, to be concluded outside of time in a world that is larger, more real, and more permanent than our own.

Watts notes that it’s a lot easier to just accept these things as part of life. Hence, the wisdom of insecurity: there is no certainty from one moment to the next in this life. When you accept that, you begin to appreciate the wonder of the now.

Watts also touches on a point that De Mello stresses in Awareness. De Mello, a Jesuit with strong streaks of Hindu and Buddhist philosophy, says that often a religious person’s understanding of God is the last and strongest impediment to enlightenment. It’s usually a second-hand understanding, passed down from doctrine rather than experienced first-hand, and in the Judeo-Christian tradition, it carries the weight of damnation if you get it wrong. It is one of those beliefs “that if we do not hold to them with the utmost tenacity, everything will vanish into chaos.”

Both Watts and De Mello define belief as something you think you know, and faith is an acceptance of not knowing. “Almost all the spiritual traditions recognize that there is a stage in man’s development when belief…and its securities has to be left behind,” says Watts. When we are willing to make that leap, to relinquish the known and secure for the unknown and insecure, when we are ready to give up what we perceive as everything in exchange for nothing–no certainties, no guarantees–then we “come to a position from which the principal ideas of religion and metaphysics can once more become intelligible and meaningful–not as beliefs, but as valid symbols of experience.”

This is how I’ve always viewed the story of Adam and Eve. Not as a factual recounting of events in a distant age, but as a profoundly accurate and moving description of the universal human progression from innocence to experience, of the cost of knowledge and the painful emergence into adult consciousness. Whether or not the story portrays actual events is irrelevant. There is no truer account of human experience.

When I read Watts again in a year or two, it will be a different experience, a different reader opening a different book to find something new and unexpected.

Shoot the Piano Player
The Power and the Glory
How's this for coincidence?
Why I've (Mostly) Stopped Reading the News
The Big Bite by Charles Williams
Then She Was Gone by Lisa Jewell
How To Make a Mess of Things
The Comedians by Graham Greene