Strangers on a Train

In Patricia Highsmith’s first novel, architect Guy Haines meets psychopath Charles Bruno on a train to Texas. Bruno isn’t the kind of lunatic who instantly terrifies people. He just comes off as a little odd at first. In the course of a long conversation on the train, Guy reveals his troubles with his estranged wife, and Bruno discusses his hatred of his father. 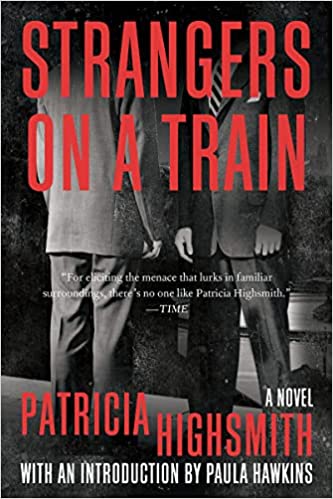 Bruno likes to read detective novels, and he mentions, off-hand at first, how it would be the perfect crime if two strangers who met on a train were to exchange murders. Bruno could kill Guy’s wife and Guy could kill Bruno’s father, and no one would ever be able to solve the crimes, because no one knows Guy and Bruno ever met, and neither has a motive to kill someone they don’t know. Guy dismisses the idea and walks away, but Bruno becomes obsessed with it.

Though it has its moments as a traditional thriller, in which the excitement comes from action and physical danger, the bulk of the book is a psychological thriller, in which we see more and more of Bruno’s terrifying madness and Guy’s slow and agonizing moral, mental, and emotional breakdown. Highsmith is especially good at portraying the inner psychological torment of a man sliding into moral corruption, and how his sense of guilt begins to poison not only his perception of the world, but his interactions with it as well.

Guy’s decline is especially vivid and painful when measured against the clear, steady conscience of his fiance Anne, who, though wise and worldly, is also pure of mind. You don’t see the true destructive power of evil until you see the value of what it destroys, and Highsmith does a good job of portraying that in showing the deterioration of a deep and healthy relationship.

I do think the book could have used some editing, but I also see why it’s a classic. Many crime and mystery writers after Highsmith included psychopathic characters just to have a deranged mind in the mix to provide some thrills and plot twists. Not many have shown so clearly and with such depth how evil slowly infects and corrupts all it touches, or how the ordinary weaknesses of ordinary people make them so susceptible to its influence.

(Low)life by Charles Farrell
Q and A on Warren Lane
Decline and Fall by Bruce Thornton
Then She Was Gone by Lisa Jewell
Discover Great Reads on Shepherd.com
My Cross to Bear by Gregg Allman
The Girl on the Velvet Swing by Simon Baatz
Kirkus Reviews Names Gate 76 One of the Best of 2018