I Am Legend by Richard Matheson

Normally, I don’t read anything about vampires, the undead, or a zombie apocalypse because the tropes have become tired and worn out. However, the Literary Darkness group on Goodreads chose I Am Legend as its book of the month for August, 2017, and I’m glad I read it. When a book comes along and spawns a whole new genre, as this one did, it’s because the author did a really good good job in bringing a world to life, and he/she hit on some timeless themes in a new way. The problem with derivative works, like many of the vampire/zombie/apocalypse novels of the past decade, is that because readers are already so familiar with the tropes (thanks to the hard work of past writers), the authors don’t bother to flesh out their characters, worlds and scenes in the deep, visceral way that the originators of the genre had to do. 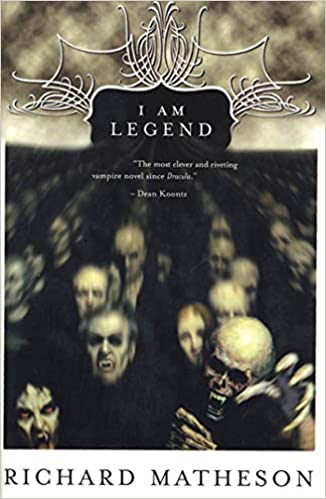 Matheson put in the work to build a convincing world, and he didn’t make it one of sheer horror and gore. The world that Robert Neville, the last man on earth, inhabits is marked primarily by tedium, and as strange as it sounds, that actually gives the book more depth. Neville spends most of his days cleaning up after the destruction of the previous night’s attacks; gathering food, supplies and fuel; studying biology in an attempt to find the vampires' weaknesses; and reflecting on the past, present, and future worlds. He kills vampires too, but that action is incidental rather than central to the story.

Where I Am Legend excels is in its portrayal of the day-to-day life of a solitary man, the last member of his species, struggling to prolong his existence even as he questions its meaning. The book is divided into three parts, with part one giving a picture of the present state of the world and a little back story on how it came to that state. In part two, we really start to understand and even identify with Neville’s loneliness and isolation, his alternating hope and despair, and his eventual transformation into a being that has almost forgotten how to feel.

Everything turns in part three, and this is where the book really becomes a classic. You will not see it coming, and what comes in the final pages dawns on the reader as shockingly, and with as much impact, as it dawns on Neville. Many books with this kind of surprise ending have a hollow feel, like the author pulled something out of thin air just to give a twist to the tale. Not this one. It makes perfect sense, which is why it hits so hard and rings so true. Matheson could not have pulled it off if he hadn’t sucked you in so thoroughly.

Focusing in the Age of Distraction
Authenticity, by Dierdre Madden
Dopefiend by Donald Goines
Why I've (Mostly) Stopped Reading the News
Writing and Programming
Q and A: On Writing
Warren Lane – Almost There
Paris, Sept. 2017