So Nude, So Dead by Ed McBain

I picked this up in a bookstore the other day because I liked the lurid, 1950s pulp style of the cover, and the opening chapter was good. I hadn’t read Ed McBain before, and I was surprised to read a first novel in which the plotting, dialog, and characters are solid throughout. 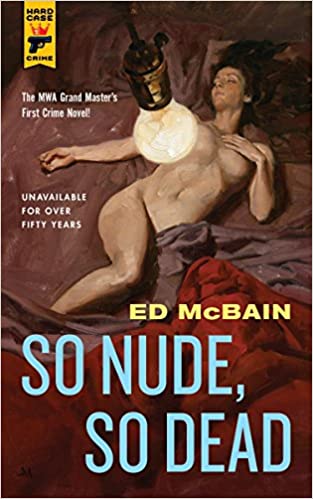 The main character, Ray Stone, is an addict who finds himself framed for a murder and has to prove his innocence. Some elements of the book are dated, such as the descriptions of fight scenes, which play out exactly as they did in the movies of the forties and fifties–a little slow, with guys in suits kicking each other in the shins and trying to wrestle pistols from each other’s hands. Some of the dated elements of the book, however, actually make it interesting. This book was first copyrighted in 1952, and slang of jazz musicians in this novel didn’t seem to appear in film until a few years later.

McBain was somewhat ahead of his time in choosing an addict for his main character, and actually portraying him as a sympathetic, fully fleshed out human being. The author accurately describes the trail of destruction and broken relationships a junkie leaves in his wake. When Ray’s girlfriend, Jeannie, decides to end their relationship, she gives a dead-on description of what it’s like to be close to a junkie. That kind of knowledge can only come from first-hand experience. It makes me wonder what McBain’s life was like at that time, and who he was hanging around with.

Many of the people who have reviewed this book say his later books are better. I’ll pick some up and see if that’s true. This one was pretty solid.

Wanda Wiley: Coming November 1, 2019
Eight Million Ways to Die
Awareness by Anothony De Mello
Gate 76 Gets a Starred Review from Kirkus
Why I've (Mostly) Stopped Reading the News
Bring Him Back Dead by Day Keene
The Girl with a Clock For a Heart
We by Yevgeny Zamyatin