Night Has a Thousand Eyes by Cornell Woolrich

Woolrich is a master of suspense and a brilliant writer. I was hoping to like this one more, but unfortunately, I could never fully buy into the story.

The book begins with Detective Tom Shawn walking home from work at one A.M. along the river, where he finds a young woman, Jean Reid, about to kill herself. He stops her from jumping and asks her why she wants to end her life when she’s young, wealthy, and beautiful. Her explanation forms an unusually long and well-written chapter of backstory. 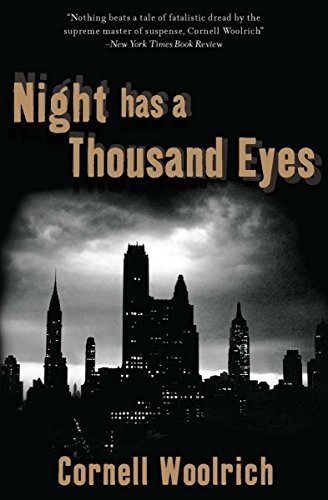 The narrative switches in the second chapter, which is well over 100 pages, from third person to first, with Jean doing the telling. She’s an excellent narrator, as well as a confident, thoughtful, observant and well-grounded character. She lives the charmed life of the wealthy, without being dysfunctional. She’s deeply attached to her father, Harlan Reid, whose recent troubles are the source of her own.

Her father, a clear-eyed practical man, has recently encountered a strange reclusive man with clairvoyant powers, and he’s become obsessed with extracting predictions from the reluctant seer. Some of these predictions are innocuous, some are helpful, and one–the prediction of the exact time and manner of the father’s imminent death–is terrifying.

After hearing this prediction, Harlan Reid is so consumed with terror and dread he cannot function. His own suffering and his imminent demise are what led Jean to attempt suicide.

After telling her story to Detective Shawn, Jean, still rattled by events, refuses to go home. The Detective takes her to the police station, where the lieutenant takes an interest in her tale. The lieutenant, a hard-eyed realist, doesn’t believe in the supernatural. He sees the whole affair as the attempt of a clever con man to manipulate a wealthy old man and separate him from his fortune.

Realizing that the setup is complete, and the shakedown will occur within the next 48 hours, the lieutenant assigns several detectives to investigate the characters Jean Reid described in her story. From here on, the novel plays out in two parts: one follows Jean and Harlan Reid, along with Detective Shawn who has been assigned as their bodyguard. The other follows the detectives sent out by the lieutenant as they shadow the characters they believe are extorting the Reids.

My problem with the book was that the psychological suspense depends on Harlan Reid’s pathological and paralyzing dread. When we meet Mr. Reid in the long second chapter, he is confident, sharp, and vigorous. How could he be so thoroughly undone so quickly? If the reader were to accompany Harlan Reid on his descent into dread–for example as the reader feels the young Mrs. de Winter’s deep earnestness, sensitivity, and insecurity in _Rebecca–_the story would be more convincing and powerful.

Instead, we watch Mr. Reid from the outside, and from that perspective, his helplessness and paralyzing dread seem like an exaggeration and an out-of-character overreaction. A flaw like that is excusable when it involves a minor character and a minor plot point, but it’s a problem when the entire novel and the actions of all the characters hinge on it.

Woolrich was certainly ambitious in this book, unfolding a complex plot through an equally complex narrative structure, incorporating prose that is at times tedious and at times powerful and strikingly brilliant. Even if some elements of the book aren’t entirely satisfying, he sure aimed high, and there’s a lot to like about this one.