This brilliant and original book is deeply disturbing, and at times difficult to read because of its dark subject matter and its portrayal of violence, cruelty, and destruction. I won’t go too far into the plot, since the book summary and many other reviews cover that. 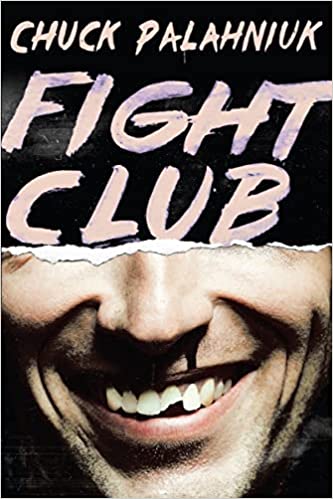 In short, a young man who has become alienated from his job, his culture and himself starts “fight club,” where guys take out their frustrations by beating the hell out of each other. After fight clubs spring up in a number of cities, the members start Project Mayhem, which is an attempt to force their violence on all of society and to destroy civilization itself through a series of small, vicious, petty, spiteful destructive acts.

The mindset that Palahniuk portrays is similar to the mindset of today’s terrorists, who have completely divorced themselves from this world and everything in it, and turned all their energies to the wanton destruction of civilization. The book is narrated in first person, and the main character provides a chilling portrayal of a mind that cannot or will not accept any place this world has to offer him and slowly comes unhinged.

Some readers have read this book too literally, as a manual advocating violence, anarchy, and testosterone-fueled destruction. Those readers should keep in mind a number of things. First, the narrator’s job is a big part of what pushes him over the edge. He works for an automobile company, investigating defective parts that led to fatal crashes.

As part of his work, he sees again and again how the company that supports his existence and pays for his apartment and furniture has caused the violent and gory deaths of innocent people. He also mentions several times the company’s formula for determining when it should recall products it knows are killing people. Simply put, they issue a recall if they think it will be cheaper than the cost of settling all the lawsuits of all the people they’ve killed.

So the narrator sees that human life, in the age of big capitalism, is worth very little. It’s a simple variable in a formula on a piece of paper back at corporate headquarters, and it takes a great number of lives to outweigh a handful of dollars. But out in the field, where he examines the mangled cars that have been in bloody wrecks, life is blood and guts and suffering. The narrator seems to want to connect with that part of himself when he starts fight club: the part that is animal and can bleed and suffer. Although the book contains many graphic descriptions of violence, the narrator spends more time describing his wounds, which seem to be the only things that make him feel alive.

The book is also a satire, in some senses, on the Iron John, back-to-nature, drum circle type movements of the 1990’s (when the book was written) that encouraged men to get in touch with a side of their masculinity that modern American culture has tried to sanitize out of them. Fight Club just takes that movement way over the top, and shows that civilization has some very good reasons for suppressing the more violent and aggressive aspects of masculinity.

I don’t want to give too much away, but as the book winds down, the narrator wants more and more desperately to get away from Tyler Durden and the destructive anarchy he has unleashed. I don’t think either the narrator or the author condones the horrible world this book describes. But they help you understand it as the flip side of the shiny capitalist/consumerist culture that relentlessly encourages people to desire, pursue, and obtain all things material without any provision for the spiritual and emotional dimensions of life.

Amazon Names Impala One of the Best Books of September
American Pain by John Temple
Dopefiend by Donald Goines
52 Pickup by Elmore Leonard
Discover Great Reads on Shepherd.com
The Moonstone by Wilkie Collins
Loose Girl by Kerry Cohen
The Slaves of Solitude by Patrick Hamilton