Published in 1966, One Fearful Yellow Eye is the eighth book in John D. MacDonald’s Travis McGee series. This one takes place mostly in Chicago, where McGee has travelled to help an old friend. Gloria “Glory” Doyle was one those “broken birds” McGee had taken in and for a period of healing after her life had gone wrong. Her happily-ever-after came in the form of marriage to the good and caring Dr. Fortner Geis. 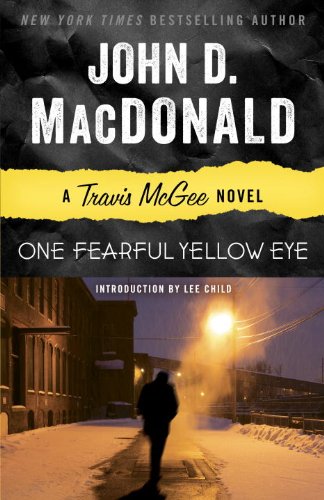 This story opens with a call from Glory. It seems someone had been extorting the late Dr. Geis in the final year of his life, draining his savings bit by bit until there was nothing left of the substantial estate his family had expected him to pass on. Dr. Geis' children from his first marriage, Heidi and Roger, despise Glory for marrying their father, an older widower, just three years before his death. They see her as the gold digger who stole all their money, and she wants to clear her name.

So McGee flies to Chicago in December to help his old friend, and to get a crack at some of the $600,000 she’s trying to recover. As with the other McGee novels, many of the most interesting parts of the book come from the protagonist’s observations of the world around him.

“Statistically,” McGee says of Chicago, “it is probably the one city in the world where the most people have been killed in arguments over professional athletes.”

Standing on the windy shore of Lake Michigan in the December gloom, he observes:

There was no color in the world. Grey sand, gray water, grey beach, grey sky. I was trapped in one of those arty salon photographs of nature in the raw, the kind retired colonels enter in photography contests.

This book has the usual McGee ingredients: a woman (or two) in distress, at least one of whom is a love interest, plenty of mystery, plenty of suspects, and a healthy dose of violence and suspense.

This book is also interesting as a bit of archeology, portraying a past that is, on the one hand, outdated and gone, and on the other, a vivid prototype of the world we’re living in now.

Among the “outdated and gone” is the book’s portrayal of acceptable gender relations. All young women are sex objects in McGee’s world, and neither the men nor the women make any bones about it. The mid-sixties was the height of the sexual revolution brought about by the pill, when women were, perhaps for the first time in American history, as free as men to sleep with whomever they pleased. General attitudes toward sex were pretty open. People wanted to explore, and they did.

Still, I wonder sometimes about McGee’s constant sexualization of women. Was it the norm then? The acceptable norm? Or was McGee simply the flip-side of the female fantasy portrayed in romance novels, where the men are the objects of desire and are viewed by the women first and foremost as potential mates?

All fiction is fantasy to some extent, and in fiction intended as entertainment, the protagonist is usually a projection of who the reader wants to be. I know plenty of guys whose fantasy life would look just like Travis McGee’s. Live on a boat, drink beer all day, work when you feel like it, beat up bad guys, be the hero, and have women everywhere express their gratitude and admiration in bed. That beats the hell out of nine-to-five.

Among McGee’s “prototype” observations are his notes on the physical state of mid-sixties America. This is his description of the city on his arrival:

I could smell a sourness in the wind. I remembered that it blew across a dying lake. For a hundred years the cities had dumped their wastes and corruptions and acids into it, and now suddenly everyone was aghast that it should have the impertinence to start dying like Lake Erie. The ecology was broken, the renewing forces at last overwhelmed. Now the politicians were making the brave sounds the worried people wanted to hear.

Now they were taking half-measures. Scientists said that only with total effort might the process be slowed, halted, reversed. But total effort, of course, would raise havoc with the supposedly God-given right of the thousand lakeshore corporations to keep costs down by running their poisons into the lake.

McGee and his author show a deep understanding of human psychology, as well an empathy and compassion for crime’s victims that is often either missing or shallowly portrayed in contemporary thrillers. If you’re looking for a well-written mystery with depth and interesting characters, this is it.

Iceland, June 2016
Six Days of the Condor by James Grady
The Man in the High Castle
The Talented Mr Ripley
Gate 76 Gets a Starred Review from Kirkus
You Play the Black and the Red Comes Up by Richard Hallas
(Low)life by Charles Farrell
Focusing in the Age of Distraction