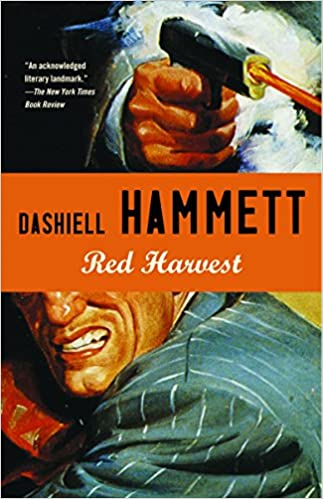 Personville, a town of about forty thousand, is owned by Elihu Willsson, father of the deceased Donald. He owns the mine, the bank, the newspaper, the governor, a Senator, and a number of other political figures. He lost control of his town years ago, after hiring thugs to brutalize his striking miners. After breaking the strike, the thugs decided to stay. They now run the police department, the casinos, and the bootlegging industry. (This was the 1920s, when Prohibition created powerful gangs to supply illegal alcohol to the thirsty public.)

The Continental Op decides the town needs a thorough cleaning. The gangs, the thugs, and the crooked cops all need to go. Old Elihu Willsson hands him a ten-thousand-dollar check and tells him to clean up however he sees fit.

The Op is as tough, low-down and dirty as any of the criminals he’s up against. Conversations with the corrupt police chief Noonan and the gold-digging girlfriend-to-all Dinah Brand reveal the rivalries between gang leaders, the grudges held by everyone against everyone.

Poisonville, as The Op likes to call it, is a powder keg of violent resentment. If the Op can figure out who hates who for what, he can spread rumors, stoke resentment, provoke the rival gangs into all-out war and have them destroy each other.

This is what he does. The action is relentless and over-the-top. By chapter twenty, we’ve already witnessed sixteen murders, and there are plenty more to come. The Op is in the middle of most of them, with Chief Noonan and the various gang leaders taking him into their confidence from time to time as alliances shift. Each of the criminal leaders thinks they can play him, or set him up to be killed.

They can’t. He’s always a step ahead because he’s done his research and he understands their rivalries and motivations well enough to keep them at each other’s throats.

Hammett is often mentioned in tandem with Raymond Chandler. Both were masters, but Hammett’s work is darker and far more violent. Before he turned to writing, Hammett worked for the Pinkerton Detective agency, often dealing with the types of street toughs he writes about in Red Harvest.

Lee Child’s novels are obvious descendants of this one. Like The Continental Op, Jack Reacher keeps wandering into small corrupt towns and cleaning up through a combination of wits and brutality.

Charlie Huston is another descendant of Hammett. The relentless action and high body count of Caught Stealing is reminiscent of Red Harvest. Many characters don’t stick around long enough for us to get to know them. The darkness of James Ellroy’s atmosphere and tone also seems to descend from Hammett.

Hammett wrote for Black Mask magazine before Alfred Knopf published Red Harvest in book form. If you dig into the old Black Mask stories, you’ll find that most of them are similar to Red Harvest: dark urban settings, desperate people living in borderline poverty, thin but colorful characters, lots of action, not a lot of reflection or introspection. Motivations are always simple: greed, power, lust, and revenge. The action is lurid, graphic, relentless. Hammett just happened to do it better than all the rest. His narrative and dialog wring rich color, flavor, and atmosphere from few words.

While the rivalries, the sequence of events, and the huge cast of characters in Red Harvest can be hard to track, the overall story is as simple as a black and white inked comic. It’s all action, all in the foreground. We don’t need to know the characters, we just need to know what kind of brutality and duplicity they represent.

Ian Fleming once said that a good thriller should keep readers turning pages. The action should come too fast for them to want to look beneath the surface. This is Hammett’s approach in Red Harvest, and it works well.

Raymond Chandler, by contrast, is more reflective, slowing down now and then to consider the psychology of his characters and the world that formed them. Both are very good at what they do.