The Girl on the Velvet Swing by Simon Baatz

The Girl on the Velvet Swing tells the story of the 1906 murder of famed American architect Stanford White, who was shot to death before a crowd of New York’s elite at the opening night performance of a play at Madison Square Garden, one of the city’s architectural landmarks, which he himself designed. After the shooting, White’s assailant, the young millionaire Harry K. Thaw handed his pistol to a fireman and calmly walked to the police station in the company of a single officer. 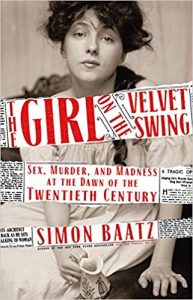 When asked why he had shot White, one of the city’s most prominent citizens, Thaw said simply that he was avenging the honor of his wife, Evelyn Nesbit, whom White had raped five years earlier, when she was sixteen.

Nesbit had arrived in New York in 1900 with her mother and brother. The family had done well in a small town in western Pennsylvania until the sudden death of Nesbit’s father left them destitute. While her mother took in sewing to make ends meet, Evelyn’s beauty made her a popular model for artists.

In New York, Evelyn Nesbit caught the attention of painters, sculptors, photographers, and theater directors. Stanford White noticed her after she’d been cast in a production of Floradora at the Casino Theater on Broadway. White asked Edna Goodrich, an older actress in the play, to introduce them.

At White’s house, the fifteen-year-old small-town girl got her first taste of the high life. According to her testimony in two separate trials, after spending months gaining her confidence, White drugged her and raped her while she was unconscious.

Harry Thaw came from a Pittsburgh family that had made its fortune in iron, coal, and railroads. Thaw was in his early thirties when he met Evelyn, who was still in her teens. Thaw had an $80,000 annual allowance, had never worked, and had been kicked out of every school he had attended.

Although his money made him a member of New York’s elite and he frequented the same theaters and restaurants as Stanford White, none of the city’s social clubs would have him. There were rumors, which White himself repeated, that Thaw was addicted to heroin and cocaine, that he lured young girls who aspired to the stage to an uptown house on the pretext of offering auditions, then stripped and beat and terrorized them. After the assaults, he used his money to buy their silence.

Everyone knew that Thaw was eccentric. Some thought he was insane. No one wanted him in their club.

Thaw was the kind of man who nursed a grudge and brooded over every slight. He was also, according to his young wife, obsessed with the idea of female purity and chastity. The knowledge that his most bitter enemy had done such a thing to his wife when she was only sixteen filled Thaw with hatred and rage.

The series of events leading up to the murder, and the murder itself, occupy only the first four chapters of Baatz’s book. The remaining 220 pages describe Thaw’s trials and his legal wranglings with the state of New York, the authorities in Canada, and New York City’s ruthless, relentless, and single-minded District Attorney, William Travers Jerome who pursues Thaw like Ahab pursues his whale.

The book actually gets more interesting at this point, as it shows the lengths to which the wealthy will go to get their way, and the means by which they will accomplish it. Harry Thaw and his obsessive, underhanded mother are as relentless as the government officials who want to make their lives hell, and they have an almost inexhaustible supply of cash to fight their fight.

The post-murder battles involve prosecutors, clever lawyers, governors, the US Supreme Court, an asylum for the criminally insane, the government of Canada, gangs from Hell’s Kitchen, and the intractable, often wrong-headed opinions of the public and the press. While the murder itself was a lurid spectacle in the most unexpected setting, the post-murder wrangling provides a fascinating look into how wealth, power, government, law, public opinion, and the press wield their powers in American society.

Baatz is right to focus on the rich story of crime’s afterlife, which includes a series of events more dramatic and improbable than any author of fiction could ever reasonably invent.

I won’t spoil it for you, because it’s a great read. Go out and get a copy!

Best of the Year So Far
The Great Divorce – C.S. Lewis
The Choice by Edith Eger
The Big Bite by Charles Williams
Gate 76 Gets a Starred Review from Kirkus
One Fearful Yellow Eye
First Draft of a New Novel: Gate 76
How To Make a Mess of Things