The Slaves of Solitude by Patrick Hamilton

Patrick Hamilton’s The Slaves of Solitude is set in a boarding house in the London suburb of Thames Lockdon during the winter of 1943. A number of Londoners have abandoned the city after the German blitz and taken up residence in the Rosamund Tea Rooms, where they live under the weight of the war and government-imposed nighttime blackouts. 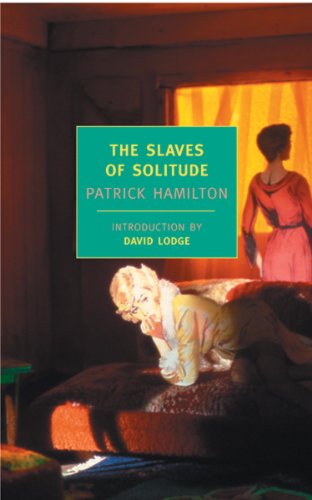 The book presents a cast of characters forced together by the war who would never have come together on their own. The protagonist, from whose perspective we see most of the action, is the prim, repressed, highly observant and highly sensitive Miss Enid Roach. Her sometime love interest is the heavy-drinking, good-natured American lieutenant Dayton Pike. Her rival and nemesis is the conniving and underhanded Vicki Kugelman, and her tormentor is the hilariously boorish, cringe-inducing bully, Mr. Thwaites.

The overall atmosphere of the book is one of repression, claustrophobia, and forced closeness. But it’s still one of the funniest books I’ve read in a long time. The inhabitants of the Rosamund Tea Rooms have sunk into a toxic atmosphere of sniping and resentment, and the house is dominated by the boastful, pompous, and impossibly obnoxious Mr. Thwaites, a Dickensian comic character whose sole joy in life is to torment everyone around him.

His favorite target is the meek and even-tempered Miss Roach, who tries to maintain a sense of dignity as she absorbs his abuse. This would be depressing if it weren’t so funny. Because no one in the boarding house will stand up to Thwaites, he freely expresses his ill-informed opinions on everything, in the most obnoxious ways possible.

This scene gives a good flavor of the character and the writing. By this point in the book, we know that neither Mr. Thwaites nor any of the other characters has ever been wealthy. They’re are all stuck at the boarding house precisely because they can’t afford to go anywhere else.

The meal was breakfast: the subject, utility clothing. “As for the stuff they’re turning out for men nowadays,” said Mr. Thwaites bitterly, “I wouldn’t give it to my Valet.”

Mr. Thwaites' valet was quite an old friend. An unearthly, flitting presence, whose shape, character, age and appearance could only be dimly conceived, he had been turning up every now and again ever since Miss Roach had known Mr. Thwaites. Mostly he was summoned into being as one from whom all second-rate, shoddy, or inferior articles were withheld. But sometimes things were good enough for Mr. Thwaites' valet, but would not do for Mr. Thwaites. Mr. Thwaites' spiritual valet endowed Mr. Thwaites with a certain lustre and grandeur, giving the impression that he had had a material valet in the past, or meant to have a material valet in the future. Mr. Thwaites also occasionally used, for the same purposes, a spiritual butler, a spiritual footman, and in moments of supreme content, a spiritual stable-boy. He had at his disposal a whole spiritual estate in the country.

In the close atmosphere of the story, the narrator spends a lot of time parsing the statements and subtle actions of the characters, as in the passage above. Sometimes the close parsing is funny, sometimes it’s revealing and insightful, and often it’s all of those things at once.

Though she sees quite clearly, poor Miss Roach is too modest and retiring to assert herself, and life seems to happen to her in confusing ways. She’s as ambivalent toward her American lieutenant as he is toward her, and for a long time, she can’t decide whether or the German provocateur Vicki Kugelman is evil or simply coarse, obtuse, and ill-mannered.

It isn’t until the end of the book that Miss Roach begins to see what the reader sees quite clearly in the beginning and then loses sight of: that the primary causes of her being so stuck in life are first, the impossible, smothering situation into which the war has forced the residents of London and its environs; and second, the fundamental elements of her character that make her so maddening and empathetic. Anyone as observant, sensitive, and unassertive as she will be pushed around by life.

Still, you can’t help liking her, especially when the narrator reveals her thoughts, as in this scene, where she returns home from drinks with Vicki:

Patrick Hamilton is today most famous for his play Gaslight. Charles Boyer and Ingrid Bergman starred in the 1944 film version, from which comes the term gaslighting, which means to psychologically manipulate a person (usually a woman) in such a subtle and thorough way that they begin to doubt their own judgment, perception, and sanity. Hamilton was an acute observer of human motives, psychology, and social interaction. The Slaves of Solitude puts a comic twist on his sharp and accurate observations. It’s a wonder, and a shame, that the book is not more widely read.

The Midnight Bell by Patrick Hamilton

The Siege of Pleasure by Patrick Hamilton

The Plains of Cement by Patrick Hamilton