Pick Up by Charles Willeford

In the opening scene of Charles Willeford’s Pick Up, counterman Harry Jordan is wrapping up a long day’s work in a San Francisco diner in the early 1950s. One last customer straggles in around 1:00 a.m. Helen Meredith is drunk, seeking a cup of coffee. She’s well dressed and obviously better off than Harry, who lives in a boarding house and has trouble keeping a steady job. 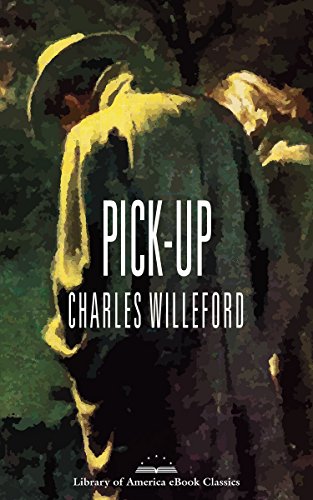 When it’s time to pay for her coffee, Helen confesses she’s lost her purse and doesn’t have a dime. Harry pays for her coffee and the two leave together to retrace her steps through the bars in search of the lost purse. As they walk, Harry confides to himself, “Gin was my weakness, not women, but with a creature like her… well, it was enough to make a man think.”

So far, the setup sounds like a typical noir. At the first bar, when they make their formal introductions, Harry tries to warn her off.

“My name is Harry Jordan,” I said solemnly. “I’m thirty-two years of age, and when I’m not working, I drink.”

Her laugh closely resembled a tinkering bell. “My name is Helen Meredith. I’m thirty-three years old and I don’t work at all. I drink all of the time.”

The two spend the next few days barhopping, and finally, at a club one night, they have a real heart-to-heart. Harry again tries to warn her off.

“I’m pretty much of a failure in life, Helen. Does it matter to you?”

“No. Nothing matters to me.”

When she gets up to go to the restroom a minute later, Harry notes:

It wasn’t easy for her to hold her feet, and she had had more to drink than I’d had. I watched her affectionately as she picked her way across the dimly-lighted room. She was everything I ever wanted in a woman.

That line comes off as darkly funny, as Harry realizes he’s found a woman who can truly understand him because she’s sunk as low as he has. No one can really undestand life at rock bottom unless they’ve been there.

This is where the book diverges from the traditional noir formula of the femme fatale seducing a man to his destruction.

Willeford takes a hard look at the lives of two people who don’t fit into post-war American society. Helen was bred in high society to be the wife of a wealthy man. Harry had an artist’s temperament and sensitivity and wanted to paint. What happens to those people when the fate they were supposedly born for doesn’t work out? What happens if their desires persist but can find no outlet?

As Harry tells it, “Without art as an emotional outlet I turned to drinking as a substitute and I’ve been drinking ever since.”

To their credit, both characters are fully aware of who they are and how they’re living. Both seek help, even at the expense of doubt and humiliation. Addicts who are honest with themselves see the world without veneer, and that’s what we get through the eyes of Harry Jordan. Some of it comes of as despairing, but much of it is a valid indictment of a society that chose to focus on the pursuit of material wealth while neglecting the social, spiritual, and emotional wellbeing of its citizens.

As he recounts his life, we see that Harry’s descent was not the result of any great trauma, but simply an accumulation of frustrations and disappointments. When a psychiatrist asks him why he was fired from his job teaching art, Harry says:

Painting can’t be taught, Doctor. Either a man can paint, or he can’t. I felt that most of the students were being duped, cheated out of their money… In my spare time I talked to some of the more inept students and persuaded them to quit painting and go into something else. Somehow, the school didn’t like that. But I was only being honest. I was merely balancing the praise I gave to the students who were good."

Pick Up isn’t a particularly light read, but it’s a good one that takes a hard, honest look at the challenges of those on the bottom rungs of American society. The book is a cult classic because the world it so accurately describes persists to this day. Swap out alcohol and San Francisco for opioids and rural America, you’ll find that, for many people, the nature of trouble hasn’t changed.

Wanda Wiley Is on Bookish First
The Wisdom of Insecurity by Alan Watts
Authenticity, by Dierdre Madden
Johnny Manic Cover Poll
First Draft of Book Number Six
(Low)life by Charles Farrell
Irrational Man by William Barrett
I Was A Spy by Marthe McKenna