The Holographic Universe by Michael Talbot

The premis of The Holographic Universe is not that the universe is a literal holograph, but that a holograph may be the best metaphor for understanding the universe. 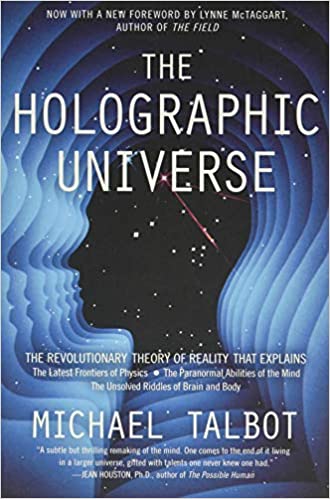 Michael Talbot describes how holographs are made: using mirrors and lenses, you split a laser beam into two parts, the object beam and the reference beam. The object beam reflects off the object you want to record (a strawberry, or a bird, or whatever) onto holographic film, while the reference beam hits the same film at the same time from a different angle. The film records the interference patterns from these two beams.

Looking at the film with the naked eye, you’ll see nothing but a diffusion of tiny dots. However, if you shine the reference beam at the holograph from its original angle, you’ll see the three-dimensional image recorded by the object beam: the strawberry or bird. It’s as if the reference beam, being half of what generated the holograph’s interference pattern, is able to reverse the interference and reveal the other half.

Holographs have some unique properties, including the ability to record multiple images on the same film simply by changing the angle of the reference beam. Each image can be unlocked later by changing the angle of the reference beam to match the angle used during recording. The images in the film do not interfere with each other even though they are all present in the same space, nor is it possible to tell that more than one image is present until you get the angles right. What you see literally depends on how you look.

In addition, and perhaps most strikingly, if you break a holographic film into multiple parts, you’ll find that each part still contains the entire image.

Talbot argues that, like holographic film, the matter and energy of the universe contain encoded information. Consciousness, like the laser, decodes that information into “reality.” Talbot doesn’t believe in dualism, where the observer and the observed are separate entities. He argues for the cosmic unity described in the Hindu, Sufi, and shamanic traditions. No part of the holographic universe exists without any of the other parts, and each part contains the whole. The experiencer, the experienced, and the experience are all one thing. Their separateness is an illusion akin to the Hindu maya.

Talbot notes that quantum physicists digging into the minutia of the physical universe have found, by a very different road of investigation, the same truths that the mystics have found on their inner spiritual journeys. Quantum entanglement suggests that time and space may indeed be illusions. If information can’t travel between the particles across vast swaths of space at a speed faster than light, then maybe there is no space.

Talbot calls this non-locality. On a certain level of reality, everything exists everywhere, all at once. Our limited perception, like the holographic laser coming from a single angle, is only capable of perceiving bits and fragments of the totality.

Similarly, quantum particles embody all possible states until they are observed. The act of observation forces all possible states to resolve to a single actual state. Talbot quotes physicist Paul Davies: “The lesson of the quantum is that matter can only achieve concrete, well-defined existence in conjunction with the mind.”

So, where does Talbot go with this?

He spends a great deal of the book arguing that certain psychic and spiritual phenomena result from individuals being able to access more of the universally encoded “reality” than our normal senses allow. If, as in the holograph, all the information in the universe is contained in every particle of the universe–in every person, place and thing–then why should it be beyond our ability to see and know past and future events? What prevents us from accessing that information?

According to Talbot, we are all just vibrations in a cosmic, all-pervasive consciousness that is God. Ancient mystics said essentially the same thing, and the theories, measurements and experiments of modern physicists seem to point in this direction as well.

All of that reminds me of a conversation between Prince Arjuna and Lord Krishna in The Bhagavad Gita. When the prince realizes that Lord Krishna is God in human form, he says, “I want to be with you, but I don’t know which road to take.” Lord Krishna replies, “It doesn’t matter which road you take. Because I am the ultimate truth, all roads lead to me.”

And so the physicists, coming from the tradition of reason make the same discoveries as the mystics who come from a tradition of pure spirit.

Talbot spends many chapters describing psychic, spiritual, and religious experiences that appear to defy our common understanding of the world, but that make sense in a holographic universe where all points of consciousness can access all information. If you don’t believe in religious miracles, pre-cognition, clairvoyance, mind reading, out of body experiences or near-death experiences, you may have a hard time with the bulk of this book. Talbot simply accepts as fact all reported accounts of miracles and psychic phenomena, even those reported centuries ago, and then explains how a holographic universe would make them plausible.

Even if you don’t buy all of Talbot’s claims, you’ll find him leading you through many questions that the workaday material world doesn’t even bother to ask. Talbot changes the angle of your mental laser to reveal new insights and possibilities in a world you thought you knew.

A Cool App with Real World Value
Target: The Girl
The Troubled Man by Henning Mankell
The Bestseller Code
Amazon Names Impala One of the Best Books of September
Wives and Lovers by Margaret Millar
E-books and Pricing
Night Has a Thousand Eyes by Cornell Woolrich