One of the downsides of indie publishing is that there are so many titles out there, it’s hard for the good ones to get attention. This is one of the good ones.

D. J. “Jock” MacDonald ran the police station in the mining town of Kilembe, Uganda in the late 1950s and early 1960s, and was responsible for keeping order in a broad swath of the country’s rural Western Province. Dead End at Buffalo Corner recounts actual events in a novel-like third-person narrative. 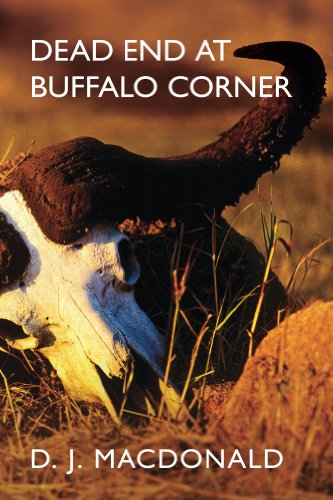 The meat of the story takes place in 1960. As the neighboring Congo lurches violently toward independence, the Belgian colonial masters, who had ruled the country with exceptional cruelty, are pouring across Uganda’s western border, in flight from Patrice Lumumba’s revolutionaries.

Day after day, from dawn till dusk, a squadron of single-engine bush planes, assembled spontaneously by European ex-pats from all over East Africa, shuttles refugees from Kinshasa across the Rwenzori, “The Mountains of the Moon,” to Kilembe’s tiny airfield. The miners and their wives mobilize to feed and house them, and to arrange transportation to the international airports in Kampala and Nairobi.

The chaos of this upheaval brings out the best and worst in people. The pilots, all volunteers, risk their lives multiple times a day for people they’ve never met and will never see again. Some of the rescued are equally selfless, while others show shocking ingratitude and selfishness.

As the tiny planes shuttle back and forth overhead, a much larger migration takes place along the unpaved roads below. The Belgians who have managed to get their wives and children onto commercial flights out of Kinshasa pack everything they own into their cars, and a weeks-long caravan floods across the border into MacDonald’s territory.

In the relative safety of western Uganda, with the chaos of the Congo behind him, one driver takes a wrong turn in the dark and is separated from the rest. Alone in the night at the crossroads at Buffalo Corner, he has the misfortune of meeting three violent opportunists who are out of work and down on their luck. Joseph Mazy has a working car, infinitely valuable in that remote part of the African bush. Inside is all his cash and everything he owns. He’s too good a target to pass up.

Mazy’s body ends up deep in the bush, miles away. His car disappears. And then three men show up in various towns wearing fine Belgian suits that don’t fit.

The most violent of the three, a Kenyan drifter named Njugunu, turns up in Kilembe, where a local officer arrests him for refusing to exit a bus at one of the mine checkpoints. The officer hauls him in to Jock MacDonald’s office for questioning. Njugunu tells a story that doesn’t make sense. MacDonald is curious about his expensive ill-fitting suit, so strangely out of place in the remote African bush.

At this point, no one knows that the robbery occurred, or that Mazy and his car are missing. With no idea of how violent he is or of the crime he’s just committed, MacDonald locks Njugunu in a holding cell on a minor charge. Njugunu attacks an officer and escapes. And then the pieces of the story begin to trickle in from afar.

MacDonald’s remote field office, understaffed and ill-equipped, is suddenly under international pressure from the governments of Uganda, Belgium, and the U.K. to solve a crime that has no witnesses.

Dead End at Buffalo Corner reads like Graham Greene’s version of a police procedural. The crime and the work that MacDonald and his crew did to bring the perpetrators to justice is fascinating enough on its own. What makes the book stand out is its rich account of life in rural Uganda at a unique point in history. The Congo had just shaken off the yoke of its colonial masters, and Uganda would soon follow.

MacDonald’s immersive description of the landscape, climate, and wildlife brings Africa to life. Humans are guests, not owners, in this world. They and the reader feel nature’s presence at all times.

This world that technology has not yet overtaken is populated by people from multiple tribes and continents. Everything must be improvised, from investigative tools to transportation, even down to the language spoken in everyday interactions. Police and tribesman converse in a mix of Swahili, English, and Afrikaans.

After wrapping up the case, MacDonald ends with a sense of nostalgia for the rich world he left behind. He’ll make you feel it too. If you’re looking for a good read that will transport you to another time and place, this is it.