Decline and Fall by Bruce Thornton

Bruce Thornton is a classics professor at Cal State Fresno and a fellow at the Hoover Institution. Decline and Fall is both a lament and a criticism of Europe’s weakening culture and declining moral stature. 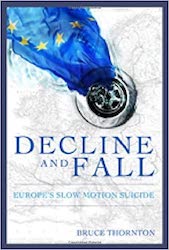 Liberals and progressives (among whom I count myself) will hate this book (though I don’t) because Thornton unabashedly advocates traditional European values such as individualism and freedom of speech, along with Christian values, including spiritual devotion to a higher power and clear and firm moral boundaries.

The author sees Europe becoming Eurabia as it loses its identity among an influx of immigrants. Just saying that is enough to elicit the knee-jerk reaction of “racist” from many left-leaning readers, but Thornton goes on to present a compelling case.

He notes how restrictive European labor laws prevent many immigrants from getting jobs, while permissive welfare laws put them instantly on the dole. This is opposite to the US, where the labor markets are open and state benefits are harder for non-citizens to get. While US immigrants are forced to work and assimilate, Europe’s immigrants remain isolated, unemployed, and little invested in cultures that offer minimal economic opportunity.

This, by itself, is a recipe for trouble, but Thornton goes on to show the underlying problems are much worse. He spends much of the book looking at how European political movements of the past two centuries have evolved to fill the spiritual and moral vacuum left by the post-Enlightenment turn away from religion.

On the left, Marxism promised a utopia on Earth for the workers who were willing to unite and fulfill history’s promise. On the right, Fascism promised the ultimate victory of the master nation or race through the extermination of impure peoples. Somewhere between the two, the Green movement warned that Earth itself would go hell if we didn’t all get on board and act now.

All three “political religions,” as Thornton calls them, adopted Christianity’s linear view of history, which ends either in salvation or damnation, depending on whether or not you opt into the program. None of these political religions, however, could fill the spiritual or moral void left by Europe’s abandonment of faith. Nor is it a political movement’s job to do so.

In the absence of faith, we get a relativism that leads to persistent nagging doubts, pervasive guilt, and a lack of identity. In a world where everything is relative, we can never be sure of where we stand or even if we’re on the right side of things.

Emily Dickinson described in poetry what Thornton describes in prose, the old Europe versus the new:

Thornton sees in Western Europe “a people for whom the highest good is physical comfort and pleasure, and nothing exists that is worth fighting and dying for.” That moribund culture is increasingly in direct confrontation, even within its own borders, with an Islamic faith that knows exactly what’s worth fighting and dying for: “an implacable enemy,” Thornton says, “wishing to destroy everything the West stands for.”

Though I disagree with Thornton’s assertion that Muslims in general want to destroy Western culture, I grant his point that terrorism requires a stong and determined response. Thornton argues that Europe no longer has the strength or determination to confront any mortal foe.

He criticizes the left’s “utopian fantasies of a world in which freedom, equality, peace and prosperity can be achieved through the rational techniques of expert elites wielding the coercive power of the state.”

Though the author cherry-picks facts and relies heavily on anecdote, he does a good job pointing out problems to which liberals have been proudly, willfully, and defiantly blind.

This book, published in 2007, includes some prescient warnings. Thornton foresees the “resurgence of one of Europe’s most pernicious cultural diseases, anti-Semitism.” Nine years before the rise of the politcal right in the US and Europe, he warned of a backlash against the liberal left’s political concessions and cultural self-loathing:

“Time will tell whether repressed nationalist and patriotic sentiments, under pressure from Islamic aggression, will return in xenophobic or neo-fascist form… Denigrated feelings of patriotic pride and national belonging… will continue to be a problem in European life.”

And in American life.

This is exactly the kind of book liberals cannot read, presenting a perspective they spurn without first considering. Both Thornton and Robin DiAngelo hit on the fundamental flaw of progressive liberalism: its adherents cannot tolerate ideas that make them uncomfortable or that challenge their conception of who they think they are.

We close our eyes and plug our ears and stomp our feet and refuse to see European heritage as anything more than racist, imperialist, and white supremacist. And then a crude man with shrewd instincts, appealing to “repressed nationalist and patriotic sentiments” walks off with half our country in his pocket.

My Cross to Bear by Gregg Allman
Thirty Years a Detective
(Low)life by Charles Farrell
A Touch of Death by Charles Williams
In a Lonely Place by Dorothy B. Hughes
The Cocktail Waitress by James M. Cain
Wanda Wiley Is on Bookish First
You Play the Black and the Red Comes Up by Richard Hallas