David Howard’s Chasing Phil follows the story of two agents from the FBI’s Gary, Indiana office who go undercover to infiltrate a ring of stunningly audacious and startlingly successful con men in the mid-1970s. When agents Jack Brennan and J.J. Wedick get a tip about a guy who ripped off a pizza store owner with bogus loan papers, they ask permission from their supervisor to go undercover. The idea was to record the con man, Phil Kitzer, making incriminating statements and possibly mentioning the names of other scammers the FBI could pursue. The scope of the operation was expected to cover one or two meetings. 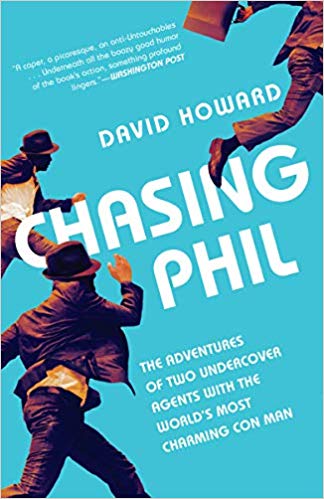 At the time, the FBI had no history of running undercover operations. J. Edgar Hooover had prohibited them out of fear that his agents would become corrupted by associating too closely with the criminals they were supposed to be arresting. But this was 1976-1977, and with Hoover recently gone, the FBI was beginning to change its ways.

Unfortunately for Brennan and Wedick, neither man had been chosen to attend the Bureau’s first class in undercover training. Not only did they have to go in cold for their initial meeting with Kitzer, they had to use their real names and IDs. They had to charge incidentals on their personal credit cards and hope to be reimbursed. The FBI didn’t even have rules for what an undercover agent could and could not do, which would lead them to have to make a number of increasingly difficult spur of the moment decisions.

Brennan and Wedick’s informant introduced them to Kitzer by phone. After a number of calls, Kitzer asked them to meet him in the bar of a motel near Minneapolis. The agents, having no disguise, were so unprepared that Kitzer’s first comment on meeting them was, “Christ, you guys look like a couple of feds.”

The three men had a few drinks, chatted about ways to acquire and sell stolen government bonds, and generally hit it off. Kitzer, then drunk, told them to get in his car for a ride. Brennan and Wedick looked at each other, unsure what to do, since there was no protocol for what an undercover agent should do in this situation, and they had no backup to bail them out if things got dicey. The agents got into the car and hoped everything would be OK.

As they talked, they began to understand that Kitzer was no two-bit con man. Nor was he the type to go in and rob a bank of a few thousand dollars. Kitzer and his international ring of co-conspirators would literally steal entire banks by forging papers that guaranteed millions of dollars in funds and getting the bank’s owners to turn over the entire operation to them. Then they’d empty out the depositor accounts, sell fake certificates of deposit and fake loan guarantees that would never be honored.

They didn’t just do this to banks. They did it to hotels, land development projects, insurance companies, and all sorts of other businesses. Some of their scams were so large, they put the economies of small countries at risk.

When Brennan and Wedick returned to the office, they tried to explain to their supervisors the magnitude of what they had uncovered. It took them months to get the higher-ups in the Bureau to understand the scope and complexity of the operations these two agents had stumbled into.

For much of the book, the agents and the few above them who understand what’s going on spend an enormous amount of time and sweat just pushing requests through the FBI bureaucracy to allow Brennan and Wedick to follow Kitzer to his next destination. The scammers fly from airport to airport on the spur of the moment, while the agents have to get on the phone and ask headquarters if it’s OK to break diplomatic protocols by pursuing the operation into another country without officially warning the other country that they’re coming. In some cases, the agents find themselves working in other countries, unacknowledged and unprotected. Other times, they’re in countries with no working phones (yes, that was a thing in the Carribbean of the 1970s) and the FBI has no idea where they are or even if they’re still alive.

In one incident, the only plane tickets Brennan and Wedick can get on an hour’s notice have GTR (Government Transport Request) stamped across the top–a dead giveaway that they’re feds traveling on government orders–and they have to try to hide their tickets from the crooks who they’re chatting with as they board. And all this is happening while one agent has to travel the world with a tape recorder the size of a brick strapped to his back.

Phil Kitzer turns out to be a fascinating character. He’s intelligent, charismatic, and persuasive. Because he has a deep knowledge of banking, finance, insurance, and law, he is often the lynchpin on which the scams of other con men depend.

Kitzer also has a thorough knowledge of the criminal justice system, which he has easily outwitted before. When the government brought its best lawyers to take him down after a massive insurance fraud in the 1960’s, he not only got himself acquitted of all charges (though he was clearly guilty), but he humiliated the prosecutors in the process.

During their months of travel together, Brennan, Wedick, and Kitzer develop a strong friendship and a deep mutual respect. Though Kitzer may be on the wrong side of the law, he’s an extraordinary person by any measure, and a hard guy not to like.

In one scene, when Kitzer still has no idea that Brennan and Wedick are undercover agents, he explains to them in chilling detail the inner workings of the FBI’s decision-making process, which he’s managed to infer by simple observation. He then goes on to analyze the tactics and shortcomings of federal prosecutors, and describes how he can easily outmaneuver them. Brennan and Wedick know he’s not just talking. He’s actually done all the things he describes.

The FBI finally comes fully onboard with the operation when some of Kitzer’s associates connect with members of the Mafia in New York. Then the operation that the Gary, Indiana office has spent so many months just trying to keep afloat becomes the FBI’s number one priority. As one agent remarked decades later, Brennan and Wedick’s undercover work exposed so many criminals, the FBI could still have been working on the cases in the 1990’s if they chose.

Things get dicey for the agents as the operation moves to New York. With the involvement of the Mafia, the agents face their first threat of real violence. At that point, they’re still working under their real names. Anyone can look up their families in the phone book. They’ve even had to turn over their social security numbers to some particularly paranoid criminals who wanted to check their credit records.

The amazing thing about this book is that it keeps getting better as it goes on. I won’t spoil what happens when the agents finally reveal themselves. The book takes an unexpected turn there, and it’s a good one. It’s rare to find a non-fiction book in which the story and the primary characters deepen unexpectedly at the end, but this one, and it’s well worth the read.

Then She Was Gone by Lisa Jewell
The Ministry of Fear by Graham Greene
Indie Reader Interview
Solaris by Stanislav Lem
Summary of an E-Book Promotion
Why I've (Mostly) Stopped Reading the News
The Cocktail Waitress by James M. Cain
Johnny Manic Is on Sale