The Troubled Man by Henning Mankell

The Troubled Man is the final installment in Henning Mankell’s Kurt Wallander series, and the only one of the series I’ve read. I found the book in a Little Free Library in a park in Virginia. I picked it up, because I felt quite troubled at the time. I saw the title and thought, “That’s me.” 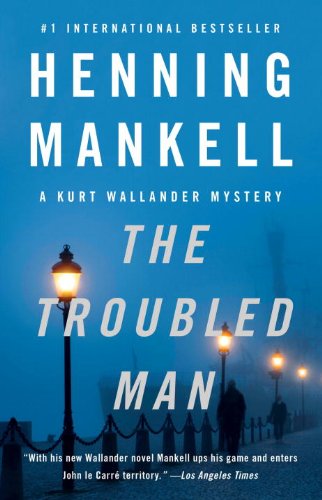 In this book, Wallander, a police officer in a small coastal town in Sweden, is sixty years old and spends a lot of time reflecting on his life. His daughter, Linda, also a police officer, has just had her first child with a man named Hans.

Wallander meets Hans' parents at a birthday party early in the story. He notes that Hans' father, Hakan von Enke, a retired Swedish naval officer, seems troubled and frightened by a figure lurking outside the party. Reflecting on the encounter days later, he has the sense that Hakan was trying to tell him something, trying to pass some kind of message.

Then one morning, Hakan disappears during his morning walk through a Stockholm park. The police in Stockholm take up the case, but Wallander maintains an interest from his home, since he and von Enke now share a granddaughter.

Wallander travels from Ystad to visit von Enke’s wife, Louise, who lets him search her husband’s papers for clues about his disappearance. Wallander makes little headway here. The deeper he digs, the more questions he comes up with.

He returns to Ystad, puzzled, and then Louise von Enke disappears. Now he has quite a case on his hands.

I wound up liking this book for the same reason I disliked the one Harry Bosch book I read: the reader spends much of the book just hanging out with the main character. In crime and mystery novels, I like the plot to keep moving. I don’t see much point in dwelling on details that don’t advance the story. That’s the realm of literary fiction, and if I want literary, then that’s what I’ll pick up.

While I found Harry Bosch uninteresting and unremarkable, Wallander is quite interesting, and his slow progress in unravelling the case, the way he proceeds in fits and starts, going down blind alleys only to back up and try another route–all of it mirrors the way life actually unfolds. The mystery itself is only one thread in the greater mystery of a man’s day-to-day life.

The author notes in the afterword that he writes for the same reason all writers write: to try to make sense of life. That’s actually what this book is at heart. Wallander is a thoughtful, observant man trying to make sense of his life.

As Wallander digs into the mystery of the elderly couple’s disappearance, he discovers old family secrets, as well as old political and military secrets from the Cold War decades of Hakan von Enke’s naval career. The deeper he digs, the more he finds how everything is tied to everything, how ignorant he was of the forces that shaped his own life, how the things we don’t or won’t or can’t see affect us nonetheless.

This is an absorbing read, and well beyond the scope of a simple whodunnit. This is a good read for winter, or a long rainy weekend. Put it on your list if you like books with a richly detailed world that you can really sink into.