This is one brutal book, and a damn good one. Slim writes with a fire that you rarely see even from great authors at their best. He doesn’t sugarcoat anything, nor does he lace his narrative with apologies to reassure delicate readers. He simply gives a straightforward account of a cruel world in which the cruelest rise to the top… at least for a while. 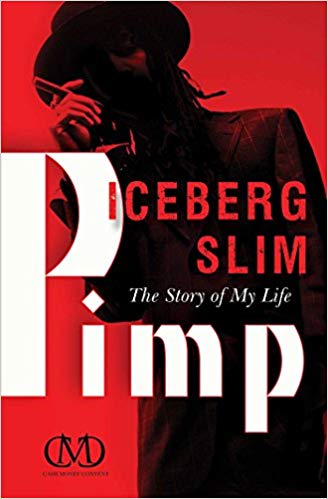 The book takes place mostly on the south side of Chicago between the late 1930s and the late 1950s. Slim, then going by the name Young Blood, arrives from Milwaukee with about one week of experience pimping his girlfriend, Phyllis. He finds a hotel on a street where rich white tricks cruise for black whores, turns his girl out on the street, and then goes looking for more to recruit.

On his first night in Chicago, in the spring of 1938, he sees a man beat an unconscious woman almost to death in front of a huge crowd of onlookers. The man then lifts the woman onto his shoulder, throws her into his car and drives off. Slim turns to another man in the crowd:

I said, “That stud would have gotten busted sure as hell if the heat had made the scene.”

He stepped back and looked at me like I was fresh in town from a monastery in Tibet.

He said, “You must be that square, Rip Van Winkle, I heard about. He’s heat. He’s vice heat. They call him Poison. He’s got nine whores. He’s a pimp. The broad is one of them. She got drunk with a trick.”

This is part of Slim’s initiation into the cutthroat underworld of a notoriously corrupt city. He calls his neighborhood Hell, and describes a nighttime walk after shooting cocaine:

I walked toward a rainbow bouquet of neon maybe ten blocks away. My senses screamed on the razor-edge of cocaine. It was like walking through a battlefield. The streaking headlights of the cars arcing through the night were giant tracer bullets. The rattling, crashing street cars were army tanks. The frightened, hopeless black faces of the passengers peered through the grimy windows. They were battle-shocked soldiers doomed forever to the front trenches.

I passed beneath an El-train bridge. A terrified, glowing face loomed toward me in the tunnel’s gloom. It was an elderly white man trapped behind enemy lines. A train furled by overhead. It bombed and strafed the street. The shrapnel fell in gritty clouds.

Slim knows he doesn’t yet have the toughness or experience to make it as a pimp in this rough town, so he goes looking for a mentor.

I was still black in a white man’s world. My hope to be important and admired could be realized even behind this black stockade. It was simple, just pimp my ass off and get a ton of scratch. Everybody in both worlds kissed your ass black and blue if you had flash and front.

Slim soon finds his mentor in the city’s top pimp, Sweet Jones. Sweet, who is close to fifty when they meet, had come to Chicago from Georgia as a teen and made a fortune. He had a stable of ten whores, and was universally feared and respected.

Sweet, whose parents had likely been slaves, tells Iceberg that the best pimps, the ones who wrote the book, were freed slaves who had come to Chicago from the South. They saw a world composed of masters and slaves, and they knew which side of that relationship they wanted to be on.

Sweet teaches Slim to maintain absolute physical and psychological control over his women through physical brutality and psychological manipulation. The treatment he prescribes is essentially the same playbook that plantation owners practiced on slaves: beat them, gaslight them, remind them at every turn that they are worthless and powerless, wring all you can out of them until they’re physically and psychologically ruined. Then go find new ones to recruit.

If you want to be a master, you have to find someone beneath you to enslave, someone even more down and out than yourself. Sweet says, “‘Berg, ain’t but one real Heaven for a pimp. He’s in it when there’s a big pool of raggedy, hungry young bitches.” By that measure, the ghetto in Chicago during the depression, full of desperate souls with no escape, was a pimp’s Heaven. (Though Slim always describes the ghetto as Hell with a capital H.)

Both Sweet and Iceberg learned hardness and hatred from the traumas of their youth. As Bessel Van Der Kolk said in his book on trauma, The Body Keeps the Score, “Hurt people hurt other people.”

Pimp does have some funny points, like when Iceberg thinks he’s conning someone else, but is actually the one getting conned. The story of how he got his nickname is also a good one, while his sporadic encounters with his parents are painfully poignant.

This book would probably be unpublishable today. It would never make it past the sensitivity readers because the author doesn’t ask for sympathy or forgiveness, nor does he engage in the kind of moral hand-holding readers today seem to demand. He does not condemn each atrocity in the same breath as he reports it. He trusts his readers to be adult enough to recognize the horrors of the world he describes. His conscience does begin to creep in over time, but for the most part, he simply chronicles world as it was, and the things he and others did to survive. That may be too much for some readers.

I don’t know why Iceberg Slim and Donald Goines are not taught in university literature programs. I went through two degrees without ever hearing of either author. Maybe it’s because the professors interested in “literary diversity” only like the kind of diversity that doesn’t offend their sensibilities. Maybe they insist their authors be squarely on the “right” side of every issue, lamenting wrongs instead of portraying them in a way the reader actually feels.

Or maybe the professors think writers like Slim and Goines are too lowbrow, too sensational. The fact is, virtually all of the West’s “classic” literature was popular literature in its day, and it was popular precisely because audiences could connect with it on a visceral level. Shakespeare himself wrote partly to appeal to the illiterate groundlings, while Charles Dickens published his revered novels as serials in bi-weekly penny papers targeted at the uneducated masses. If today’s academics had been there at the time, they may have considered both Shakespeare and Dickens as popular entertainments unworthy of serious study, pointing students instead toward Latin.

The works of Slim and Goines have been in print consistently for fifty years, which is an extraordinarily long time in today’s publishing world. They persist because they’re good, because however sensational they may be, they portray something real that people across generations can connect with. I don’t think any rational, sane human being would want to live in the worlds that Slim and Goines portray, but many of them have no choice, and someone has to tell their story.

The Art of the Cover Letter
Impala Summary Poll Results
The Girl in Cell 49B by Dorian Box
The Listening Walls by Margaret Millar
In a Lonely Place by Dorothy B. Hughes
(Low)life by Charles Farrell
What's Wrong with Genre Fiction?
We by Yevgeny Zamyatin