The Bhagavad Gita: The Song of the God Retold in Simplified English

Edward Viljoen’s Bhagavad Gita: The Song of God Retold in Simplified English is sort of a CliffsNotes retelling of the Hindu classic. Viljoen paraphrases the story’s eighteen chapters in twenty-six pages of simple, straightforward English. The remaining seventy or so pages of the book are devoted to backstory about the main characters and definitions of some of Hinduism’s core concepts. 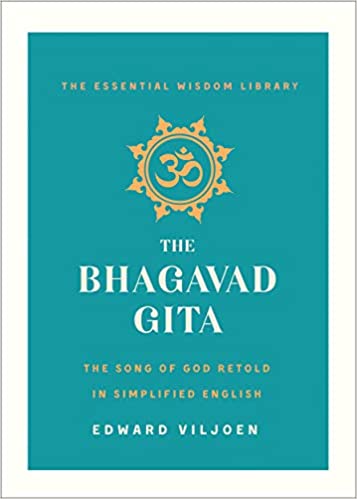 Viljoen understands that no simplified paraphrasing can do justice to the poetry of the original work. His purpose in writing this book, as he says in the introduction, is to provide an accessible introduction to the work for those who might wish to study it in more detail later.

The author cites his own difficulty in his first attempts to understand the bible. The unfamiliar language of the ancient text and the thicket of cultural allusions prevented him from grasping the main stories until he came across some simplified versions that helped him get the gist of what was going on. Once he had that, he was able to approach the bible itself with some understanding, and could dig into its deeper truths.

The meat of this book is the paraphrasing of the conversation between Prince Arjuna and Lord Krishna on the battlefield, just before the Kauravas and Pandavas–two sides of a single family–begin their destructive war. Price Arjuna is in a quandary, knowing as he surveys the battlefield that there can be no good outcome for either side. To participate in the war means to actively destroy one side of his family. To not participate means to let another side of his family be destroyed. How should he proceed, he wonders, when all options seem equally bad?

As Prince Arjuna’s charioteer, Lord Krishna, offers advice, Arjuna begins to understand that Krishna is in fact an avatar, a god descended to earth to advise him. Krishna tells Prince Arjuna that, as bad as his options are, his duty in this life is to act, and to act in accordance with his nature. There is no shirking responsibility. Choosing not to act has consequences of its own. The best action is undertaken selflessly, not for one’s own gain, but to further what one perceives as right and good.

The conversation touches on duty, devotion, the many paths that lead to good, and the many things in this life that lead us off that path.

Since the paraphrased Bhagavad Gita is only twenty-six pages, most people can read it in an hour. The additional chapters provide information about the context in which the story takes place, some background on the key characters, chapters on devotion and acceptance, and a general summary of the Hindu spiritual worldview.

All of this is introductory material, intended to help the reader approach the complex literature of a rich and multifaceted religion that is thousands of years old. The back matter includes a list of further reading, including recommended English translations of the Bhagavad Gita and additional introductory texts on The Mahabharata (the larger story of which the Bhagavad is a part), Ramayana, and Hinduism in general.

If you’re looking for an introduction to Hinduism, this is a good place to start.

North and Central by Bob Hartley
Kirkus Reviews Names Gate 76 One of the Best of 2018
In Memory of O'Neil McGean
Wanda Wiley: Coming November 1, 2019
Dead End at Buffalo Corner
(Low)life by Charles Farrell
A New Cover for Johnny Manic
Impala Is Here!