No Room at the Morgue by Jean-Patrick Manchette

Jean-Patrick Manchette’s No Room at the Morgue is the first book I’ve read from NYRB Classics that’s just flat out bad. The back cover includes a blurb from Kirkus Reviews that says, “If Marx, Freud, and Jim Thompson collaborated on a noir, this might be the result.”

Actually, if Marx, Freud, and Jim Thompson had had an editor, this book would never have been published. 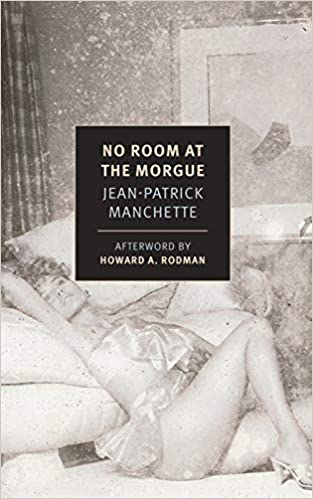 Let’s start with number one. Ex-cop Eugène Tarpon has set up shop as a private eye in Paris. In all the months he’s been in business, he’s had exactly zero cases. On day one of the story, three–count, ‘em, three–new clients walk in.

Client #1 is another ex-cop and former co-worker. He wants to hire Tarpon to train corporate security guards to beat up striking workers. Tarpon says no, curses his old friend, and kicks him out.

Client #2 is a young man who complains that criminals are extorting his jazz club in a protection racket. Tarpon racks his brains to figure out how he can help this poor kid. The solution: he beats him up right there in his office and kicks him out. But don’t get the wrong idea and think that Tarpon is a bad guy. As he punches the kid in the gut (without any provocation) he tells the reader that he doesn’t know why he’s doing what he’s doing, but he sure feels bad about it.

Client #3 is a young woman named Memphis Charles whose roommate has just been brutally murdered. Tarpon asks why she hasn’t gone to the police. She says the police will think she committed the murder, so she thought it would be better to hire a private eye (while the body in her apartment is still warm) to prove her innocence.

Tarpon says no, and it’s the only sensible thing he does in this book.

He then proceeds to insult Memphis Charles for no good reason. By now, the reader understands why Tarpon has no clients. The young woman doesn’t take insults well. She beats the crap out of Tarpon, bashes his head in with a lamp, and leaves him unconscious on the floor.

But again, lest we worry that Memphis Charles is an unlikable girl, the author has her leave a thoughtful note on Tarpon’s bed, apologizing for kicking him in the nuts and bashing his skull in.

That’s as far as this book ever goes toward answering question #3. Why should we care about Tarpon or Memphis Charles? Because they feel bad when they beat people up.

But let’s get back to question #1–What the hell is going on?–because there’s lots to explore here. As far as I can tell, a bunch of muddle-headed characters are doing their best to muddle through a muddled story that takes place in a world that’s not governed by any form of logic.

After refusing to take Memphis Charles’ case and getting beat unconscious, Tarpon decides the best thing he can do right now, at 3:20 a.m., is take a cab across town and wander into the crime scene while the police are investigating it. That apology note must have really hit home.

When he goes into Charles' apartment to view the corpse, the cops naturally ask what he’s doing there. What would bring him into that particular apartment in that distant part of town at that time of night? To the scene of a murder that no one in Paris even knows about yet?

Tarpon’s brilliant and devasting answer: “I just happened to be walking by.”

Well, that should lay their suspicions to rest. Those cops can be mistrustful when things don’t add up, so you’d better give them an air-tight story. “Just walking by” is as air-tight as you can get, except the cops watched you get out of the cab. Doh!

The cops tell Tarpon to leave, so what does he do? Why, he wanders into the basement and finds a set of bombs.

The cops scold him. “We told you to leave! Why did you go into the basement?”

Whew! I don’t know how he thought of that one, but it got him out of a scrape. The cops tell him to go home and rest.

Tarpon spends the next several chapters getting kidnapped. You’d think after the first kidnapping, he’d be more cautious, but no.

In one scene, a kid follows him down the street, pulls a knife, and says, “You’re coming with me.”

“Some very scary people sent me to get you.”

Tarpon follows the kid to a whorehouse. The go up a flight of stairs. At the top of the stairs, Tarpon decides he doesn’t want to meet the very scary people. He beats the crap out of the kid, then stands on his stomach and rides the kid down the stairs like a snowboard. At the bottom, he beats the kid up some more, feeling really bad about it, because, you know, Tarpon is a good guy.

When he’s done beating up the kid, Tarpon is free to go. So what does he do? He walks back up the stairs, unarmed, and kicks in the door of the room containing the very scary people who wanted to meet him. There he finds two men, both pointing guns at him.

Tarpon confides to the reader, “I wasn’t expecting that.”

Well what the hell was he expecting? Martha Stewart and cupcakes?

The scary guys force him into a car and drive him out of Paris. They wait on a secluded wooded road until a large Mercedes limousine pulls up. The thugs force Tarpon into the limo at gunpoint. Inside, the driver points a gun at Tarpon’s head and forces him to watch the fat man in the back seat cry silently for twenty minutes.

Then another thug pulls Tarpon from the limo and says, “I’m sorry. You’ll have to walk home.”

The book goes on like this, with more and more characters, all of whom are so thinly drawn, we can’t remember who they are from one page to the next. By the midpoint of the story, Manchette has shovelled in so many characters, he stops giving them names. The radical left-wing terrorists who abduct Tarpon in front of his apartment are known simply as “the first bearded guy” and “the second bearded guy.”

After the reader spends several pages wondering why the bearded guys abducted him, Tarpon himself finally puts the question directly to Memphis Charles.

“Why did they kidnap me?”

Her answer boils down to, “I don’t know. It doesn’t make any sense, does it?”

No, it doesn’t. But it sure is convenient that the abductors took the detective right to Memphis Charles, because he never would have found her on his own. Readers should thank the author for that deus ex machina, as it likely spared them several chapters of stretched credulity and scenes like the following:

When the mafia gunmen escort Tarpon out of the terrorist’s hideaway, he hears sounds of torture coming from a side room. What does he do? Why, he ignores the gun in his back and the thug’s instructions to exit, and instead he opens the torture chamber to see what’s inside.

Good thing he did. You know why?

Because inside is a hammer he can use to bash the Mafia thug’s hand that holds the gun that is pointing directly into his face. The thoughtful Tarpon does just that and gets himself out of yet another scrape.

After dispatching the Mafia, Tarpon gets to show what a good guy he is by freeing the terrorists in exchange for their solemn promise to behave from now on. You’d think that as an ex-cop, Tarpon would be mad at the terrorists after watching them douse a fellow cop with gasoline and set him on fire. But no. When he’s not beating the crap out of kids, Tarpon is really good at seeing people’s true humanity.

But wait, there’s more! To spare you having to read it, I’ll paraphrase a couple of the juicier scenes.

Haymann: “I don’t know what you got me wrapped up in, Tarpon, but the cops interrogated me for six hours last night. Whatever it is, I want no part of it. I can’t take this kind of heat. You hear me?”

Tarpon: “Mind if I hide a stolen car in your yard?”

And this meeting between Tarpon and the Mafia boss at the Hilton:

Tarpon: “Thanks for inexplicably cleaning up the murder scene, disposing of the bodies, and getting rid of all the evidence so I won’t have to go to prison.”

Mafia Boss: “Have some cognac.”

Twelve hours later, Tarpon awakes achy and sick, his mouth dry as a bone. The Mafia boss is standing over him.

Mafia Boss: “Here. Have some cognac.”

Mafia Boss: “This one isn’t poisoned.”

The best thing about this book is the cover, which features a provocative and beautifully staged photo by Guy Bourdin. As for the contents, well… Have you ever been on a date with an incredibly attractive person who turns into a train wreck as soon as they open their mouth? Part of you keeps looking at the clock, wondering how soon you can leave, while another part keeps saying, “No, wait, I want to see how bad this gets.”

The Body Keeps the Score
The Girl on the Velvet Swing by Simon Baatz
Loose Girl by Kerry Cohen
Then She Was Gone by Lisa Jewell
Pop. 1280 by Jim Thompson
Focusing in the Age of Distraction
No Country for Old Men
The Billion Dollar Whale