The Greatest Hoax on Earth by Alan C. Logan

Alan C. Logan’s The Greatest Hoax on Earth is a journalistic examination of the life of Frank Abagnale, the infamous con man immortalized in Steven Spielberg’s 2002 file Catch Me if You Can. That film, based on Abagnale’s autobiography of the same name, portrays a smooth charmer living a life of glamour and adventure. 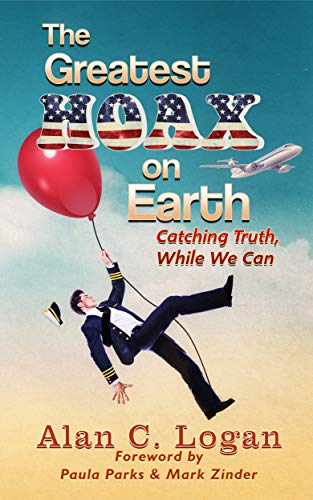 The young Abegnale cons his way onto free flights around the world with beautiful women in tow. When he needs money, the master forger simply cuts himself a check at the expense of some international corporation so huge it will never notice the missing cash. When he needs a job, he becomes a doctor, a lawyer, a university professor. He has no training or experience in any of these fields, but he’s such a convincing impostor that no one notices. Except the FBI, who spends years pursuing him, and whom he repeatedly eludes.

His life on the run, according to Abagnale’s own speeches, lasted from age sixteen to age twenty-one. After that, he reformed. And all of his adventures were harmless larks. He never acted out of malice or for personal gain. He never hurt anyone. He paid back all the money he stole.

When Logan does the hard work of trying to verify these tales, he comes up with a very different story. The author talks to a number of people from Abagnale’s past, including his ex-promoter, co-workers, law enforcement officers, and victims of his actual cons, which turn out to be petty and cringeworthy.

Logan digs up damning documentation, including letters written by Abagnale and his parents, police records, court records, prison records, and documents from archives in the US, Sweden, and France.

All of the records show the same thing, that Abagnale was actually in prison during most of the time he claimed to be traveling the world.

Abagnale has made a living for more than forty years as a public speaker, author and subject of film. His talks, books, and movies repeat the tales of exploits that Logan shows could not have been true.

The author’s point is not to take down a beloved public figure, but to expose a larger and more dangerous problem affecting our society. Abagnale just happens to be a perfect case study of how American media and promotional interests conspire to produce and repeat falsehoods.

Abagnale’s story is too entertaining to ignore. It’s exactly the kind of material that plays well on television, in news features, and in in-person TED-style talks. The story’s primary value in current American culture is its ability to draw an audience. Whether it’s true or not is irrelevant.

The making of illusions which flood our experience has become the business of America… demanding more than the world can give us, we require that something can be fabricated to make up for the world’s deficiency. – Daniel J. Boorstin, The Image: A Guide to Pseudo-Events in America

Logan points out that over the years dating back to 1978, a number of journalists and at least one university professor exposed Abagnale’s lies point by point, with evidence. And all to no effect. Why?

Because the romantic, exciting version of the story is more appealing than the true one. It’s the version audiences prefer, so it’s the one repeated by all the institutions whose survival depends on pleasing audiences. Logan shows, step by step, how the repetition of Abagnale’s story–without critical examination or even basic fact checking–progresses from local to national newspapers, from minor TV shows to major ones, from book to film. Each time the story is repeated, its credibility increases. Surely, if major news outlets and publishers and film studios are all telling the same tale, it must be true.

The media’s repetition of falsehood, and the public’s willingness to accept it, are systemic problems that threaten society itself by destroying both truth and public trust. In Frank Abagnale, Logan has chosen a fascinating subject to illustrate how the media deceives a public eager to be deceived. Abagnale is impossible to ignore even when you know he’s lying.

If you like true crime, good journalism, or just a good yarn about a slippery character, you’ll find this an engaging and entertaining read. If you like to think on a deeper level about the state of our society, you’ll find it deeply concerning.