The Three Stigmata of Palmer Eldritch

The Three Stigmata of Palmer Eldritch opens in New York City in an unnamed year of the twenty-first century. Barney Mayerson, a pre-fash consultant for Perky Pat Layouts, drank too much the night before and slept with his new assistant, Rondinella “Roni” Fugate. Mayerson and Fugate are both precogs, blessed with a talent for seeing into the future. 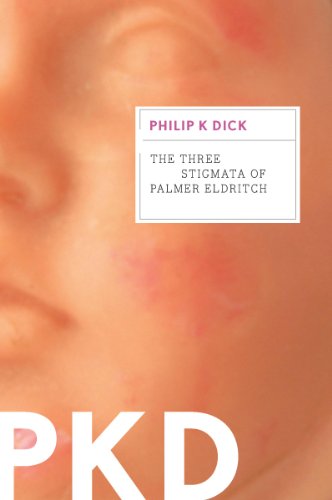 At P.P. Layouts, they evaluate common cultural objects for “minning” (miniaturizing), to be sent to the colonies on Mars, Venus, and a number of moons throughout the solar system. The miserable colonists of those gloomy outposts desparately miss the increasingly uninhabitable earth, which has become so hot that the United Nations has initiated a draft to send reluctant citizens of Terra (Earth) out to potentially more habitable places.

P.P. Layouts sells miniature dioramas of houses and apartments, stocked with tiny appliances, automobiles, televisions, clothing, and an ever-evolving supply of nick-nacks selected by Mayerson and his team. It’s an open secret that P.P. Layouts also sells an illegal drug called Can-D, which, when chewed, allows the colonists to project themselves into these dioramas and live a full second life on a virtual, three-dimensional, vividly real Earth.

The downsides of Can-D are that it’s expensive, it wears off after less than an hour, and the letdown users experience when the illusion ends is brutally demoralizing. They find themselves expelled once again from sunny, cheerful Earth, only to awaken in their dark hovels beneath the barren soil of a hostile planet.

Being drafted into the colonies, from which no one is allowed to return, is a dreaded fate. Anyone with means does what Barney Mayerson does when they receive a draft notice: hire the electronic psychologist-in-a-suitcase, Dr. Smile, to make them more anxious, less sane, and more psychologically brittle so they’ll fail the UN’s mental health exam.

Mayerson’s boss, Leo Bulero, the president of P.P. Layouts, has indulged in a favorite passtime of the rich, undergoing years of evolution therapy in Germany. He’s become a “bubblehead,” with thin limbs and a massive brain. He’s evolved a hundred thousand years ahead of the rest of the human race.

When news services report that rival industrialist Palmer Eldritch has returned to Sol (our solar system) after ten years in the Proxima system, Bulero rightly senses a threat. Can-D is the big money-maker in the solar system. All the colonists are hooked on it, and Bulero has a huge interplanetary infrastructure in place to produce, market, and distribute it. His dealers even pay off corrupt UN patrols around the colonies to ensure unfettered delivery of the drug.

Eldritch, however, has returned with something even more powerful than Can-D. Chew-Z, supposedly derived from a lichen discovered in the Proxima system, is cheaper than Can-D, lasts longer, and allows users to project themselves into any world, not just the earthly dioramas created by Perky Pat Layouts.

Eldritch is gunning to put Leo Bulero out of business, but Bulero is not one to go down without a fight. Eldritch has returned from deep space with vast, never-before-seen powers, able to distort time and reality. He is near-omniscient, and he has the corrupt UN on his side. They have approved Chew-Z for sale, while Can-D is still technically illegal. The battle seems hopeless.

But Bulero has three things on his side. His evolution therapy has made him vastly more intelligent than the average human, he has an inexhaustible will to fight, and–most curiously of all–before anyone knew that Eldritch would be a threat, Leo’s top precogs (Mayerson and Roni) both told him he would be indicted for Eldritch’s murder.

This is just the setup. Palmer Eldritch doesn’t even show up until near the halfway point of the book, when he appears in the form of a talking electronic box. He doses Leo Bulero with a shot of Chew-Z, and Bulero finds himself in a horribly distorted, dystopian nightmare world. It’s nothing like the pleasant fantasy of Perky Pat.

Worse yet, this universe is nearly impossible to escape. Every time Bulero thinks he’s gotten out of it, he finds he’s just awakened into another dimension of the same horrible reality, like waking from one nightmare into another.

Palmer Eldritch appears in all levels of these realities. All beings eventually morph into Palmer Eldritch, who is identifiable by his three stigmata: shining steel teeth, a prosthetic right hand, and slitted electronic eyes.

The moment characters morph into Eldritch is always chilling. It’s the sign that you haven’t escaped, that you’re still in the distorted nightmare universe.

When Leo complains on his first trip that the blood-sucking predators called glucks in this new universe are horrifying, Eldritch responds: “Don’t blame them on Chew-Z. Blame them on me; they’re a product of my mind, not of the lichen. Does every new universe constructed have to be nice?”

Can-D trips are a sort of pleasant, choose-your-own-adventure in which you project yourself into a familiar world. Can-D is also provides a shared experience. Everyone you dose with becomes a companion on the trip. You do everything together, including sharing a body. (All women inhabit Pat’s body together; all men inhabit Walt’s.)

Chew-Z trips are different. Everyone goes into a separate world, and every world is the disturbing creation of Palmer Eldritch.

Bulero and Mayerson speculate that the being who returned from interstellar space isn’t even Erdritch. Something else took over his body on the voyage, some being without a body of its own, and now it wants to insinuate itself into the bodies of humanity because it cannot, on it’s own, have the experience of finiteness, corporeality, mortality.

While humans, in the form of religious ritual and faith, have for centuries sought this strange being’s disembodied immortality, this creature, pained by limitless infinity, has sought the boundaries of a life that has one definite course.

Barney Mayerson comes to understand the nature of the spirit that took over Eldritch on his journey and then inhabited him during his hellish Chew-Z trip:

Because Eldritch had lived many lives, there had been a vast, reliable wisdom contained within the substance of the man or creature, whatever it was. The fusion of himself [Mayerson] with Eldritch during translation had left a mark on him, a brand for perpetuity: it was a form of absolute awareness…

[S]omething admittedly ugly and foreign [had] entered one of our race like an ailment during the long voyage between Terra and Prox… and yet it knew much more than I did about the meaning of our finite lives, here; it saw in perspective. From its centuries of vacant drifting as it waited for some sort of life form to pass by which it could grab and become… maybe that’s the source of its knowledge: not experience, but unending solitary brooding. And in comparison, I knew–and had done–nothing.

Eldritch is neither evil nor omnipotent. He’s sometimes compassionate, sometimes baffled, often disturbing, and just as often playful. These are all mere aspects of his being, manifestations of a consciousness too vast for even the evolved mind of Lou Bolero to fully comprehend. Anyone who’s seen or felt Eldritch once begins to see and feel him everywhere.

Late in the book, Leo reflects on the stigmata, the signs of the immortal, unbounded being he keeps seeing in the people around him:

Symbols of its inhabitation, he thought. In our midst. But not asked for. Not intentionally summoned. And–we have no mediating sacraments through which to protect ourselves; we can’t compel it, by our careful, time-honored, clever, painstaking rituals, to confine itself to specific elements such as bread and water or bread and wine. It is out in the open, ranging in every direction. It looks into our eyes, and it looks out of our eyes.

In addition to religion, the idea of quantum states also serves as a subtle running metaphor for an otherwise indescribable reality. The precogs understand that at any moment, there’s a huge number of possible futures. The process of time forces reality to resolve itself into one or another of them. The precog’s gift is an intuition for knowing which future is most likely to resolve.

Unlike humans, who have resolved into individual beings, each with a bounded life and a single fate, Eldritch is stuck in an unresolved quantum state that embodies all potential outcomes at once. Time, for him, is neither bounded nor linear. When humans take Chew-Z and dissolve from the limited definite to the unlimited indefinite, it’s a deeply uncomfortable experience. Most people resist and reject it. Those who fully surrender to it, as Barney Mayerson ultimately does, come to a broader, more accepting understanding of their lives. They may be living in the same circumstances as before, but their relation to their world and themselves is utterly changed. They see and accept the world for what it is. They no longer crave escape and illusion. They are, in a word, born again.

From the moment Eldritch’s first appears, it’s impossible to tell what’s real in this story. Time runs in circles, sometimes loops inside of loops. Reality becomes increasingly unreal. Every character in every scene eventually morphs into Eldritch. (As in Hinduism, each individual being is merely a of a single pervasive consciousness. As in Buddhism, a soul has many incarnations and what we perceive is only Maya, illusion.)

Eldritch’s appearance at the end of each cycle confirms the illusion of what had seemed indisputably real. (As in Christianity, the world ends with Revelation.) The illusion melts into a more substantial and convincing reality, which itself devolves into illusion. The cycle keeps reapeating, until the characters and the reader, forced to second-guess everything, finally accept that they can never knows what’s real.

Dick obviously used a lot of psychoactive drugs and/or suffered mental illness. There’s no way he could immerse his reader in such distorted realities without having inhabited those worlds himself. This is one of those rare books a person can re-read every year for a lifetime and find something new each time.

This review only scratches the surface, only shows one facet of a diamond that sheds different light from every angle. The only other writer I’ve found who packs this many ideas into a single book and who provokes as much wonder is Stanislav Lem.

I look forward to reading more from this guy.