The Coddling of the American Mind

The Coddling of the American Mind examines the political left’s intolerance of challenging and uncomfortable ideas, especially as it appears among the young on college campuses throughout the US. The authors examine a number of incidents in which university students have staged violent protests, shamed and ostracized fellow students, disinvited speakers, and tried to force the firing of professors whose ideas challenge their worldview. 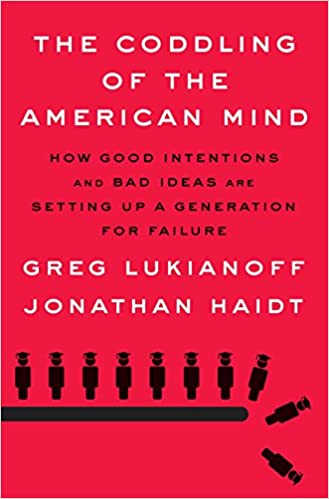 Lukianoff and Haidt call this “safetyism,” and define it as the belief that students must be protected at all times from risk and discomfort. Safetyism is the manifestation of three intertwined untruths, which have become habits of thought:

Since the topic itself is enough to provoke rage in some people, let’s start by saying what this book is not. It is not a condemnation of the political left. In fact, the authors themselves lean left.

It is not a collection of extreme events cherry-picked to show how bad the situation is. The authors recount a number of disturbing events that began occurring on campuses around 2013 and ask why these events started occurring then. What changes in students' mindset led to our current call-out culture, the shouting down, shaming, and cancellation of voices that ask us to consider difficult perspectives? The whole point of a university education, after all, is to engage with challenging ideas.

The book’s subtitle gives a sense of the authors' approach to this question: How Good Intentions and Bad Ideas Are Setting Up a Generation for Failure.

Around 2013, colleges and universities across the US began reporting a sharp rise in students requesting counseling services, with all of the rise in demand coming from students reporting anxiety and depression. This isn’t just an issue of students being more aware of their feelings, or being more willing to self-report mental health issues. The same period saw steep increases in teen suicide and rates of hospitalization for self-harm among adolescents.

One of the authors, Greg Lukianoff, had himself suffered from severe clinical depression in years past. He noticed that the mental habits of safetyism were similar to those of people suffering from depression and anxiety disorders.

Specifically, he points out the following adverse thought processes that manifest strongly among both anxious/depressed populations and liberal American college students:

These innate psychological tendencies have afflicted the human race across all cultures for thousands of years. In the ancient East, Buddhism arose as a practice to help people notice and alter these thought patterns. In the ancient West, Stoicism developed for the same purpose.[1] More recently, Cognitive Behavioral Therapy has evolved to help people recognize and alter thought patterns that cause unnecessary misery.

The central question of The Coddling of the American Mind is, Why are America’s young students showing such an intense and painful flare-up of these self-limiting thought patterns now? What has happened in the recent environment to make this such a widespread problem?

Well, a lot, actually. The past decade in the US has probably been the most traumatic and divisive since the 1960s. (The chart on page 215 has a partial list of events, including the elections of Barack Obama and Donald Trump; the suicide of Tyler Clementi, the killings of Trayvon Martin, Micheal Brown, Eric Garner, and Philando Castille; the massacres in Sandy Hook, Orlando, Las Vegas, and Parkland. Muslim bans, transgender bans, Charlottesville, #MeToo, the rise of social media, and more. Lots more. How does a child absorb all that? How does a society absorb it?)

The authors trace the harmful thought patterns listed above to the convergence of six threads in American culture since the 1990s:

Three of these social trends lead to higher emotional reactivity that short-circuits critical thinking. Polarization, anxiety and depression, and paranoia are all anathema to clear-headed reasoning and good decision making.

Two trends–the decline of free play and the rise of the bureaucratic mediator–deprive the young of skills they’ll need to manage conflict in the broader world.

The authors have a good analogy for the negative unintended consequences of these two elements of safetyism. They note that years ago, preschools across the US banned all nut products in an attempt to protect young students with dangerous allergies. Since then, the percentage of kids allergic to nuts has increased sharply. Allergists now know that one effective way of treating severe allergies is to gradually expose children to the allergen, slowly conditioning their bodies to understand that nuts are not a mortal threat and don’t need to provoke a drastic anaphylactic reaction.

Protecting kids from all exposure to nuts actually made them more allergic and more reactive. Protecting kids from risk and opposing perspectives has a similar effect. When they finally do encounter a risky situation or a dangerous idea, their fear response is likely to be disproportionate to the actual threat.

The authors introduce concept of “antifragility” early on and return to it often. A fragile thing breaks in response to stress or shock. A resilient thing survives stress and shock without much change. An “antifragile” thing becomes stronger.

Humans are antifragile physically, psychologically, and emotionally. Stress the muscles in heavy exertion, and they’ll hurt. But they’ll also grow and strengthen to tolerate the new stress. Walk too far in bare feet and your skin will be raw. Then callouses grow to protect you. Those who persevere through emotional and psychological adversity become stronger and more confident. They come to recognize minor setbacks as minor and are less easily discouraged.

Avoiding risk and adversity strengthens no one. The culture of safetyism reinforces the sense of fragility and fosters what the authors call “moral dependence.”

In support of the strength and independence that develop in a culture of antifragility, the authors quote Chief Justice John Roberts' eloquent speech to his son’s graduating middle school class:

From time to time in the years to come, I hope you will be treated unfairly, so that you will come to know the value of justice. I hope that you will suffer betrayal because that will teach you the importance of loyalty. Sorry to say, but I hope you will be lonely from time to time so that you don’t take friends for granted. I wish you bad luck, again, from time to time so that you will be conscious of the role of chance in life and understand that your success is not completely deserved and that the failure of others is not completely deserved either. And when you lose, as you will from time to time, I hope every now and then, your opponent will gloat over your failure. It is a way for you to understand the importance of sportsmanship. I hope you’ll be ignored so you know the importance of listening to others, and I hope you will have just enough pain to learn compassion. Whether I wish these things or not, they’re going to happen. And whether you benefit from them or not will depend on your ability to see the message in your misfortunes. [p. 193]

Chapter 11 of this book, The Quest for Justice, is particularly thought-provoking. The authors lament how so much of the left’s well-intentioned work is ultimately self-defeating. The quest for social justice as it is currently practiced alienates many of the people it needs to win over, reinforcing the destructive cycle of political polarization. The authors distinguish between the “common-humanity identity politics” of the civil rights movement, and the “common-enemy identity politics” of today.

The civil rights movement of the 1960s emphasized “an overarching common humanity while calling attention to cases in which people are denied dignity and rights… It did not try to force white Americans to accept a new conception of justice; it tried to help white Americans to see that their country was violating its own conceptions of justice…” [p. 221]

Throughout this book, we have emphasized a basic principle of social psychology: the more you separate people and point out differences among them, the more divided and less trusting they will become. Conversely, the more you emphasize common goals or interests, shared fate, and common humanity, the more they will see one another as fellow human beings, treat one another well, and come to appreciate one another’s contributions to the community. Pauli Murray expressed the power of this principle when she wrote, “When my brothers try to draw a circle to exclude me, I shall draw a larger circle to include them.” [p. 260]

The division unintentionally sown by seekers of justice and unity is one of the most regrettable aspects of our current age of social anxiety, but it’s not new. Similar currents of racial and social change were roiling America more than fifty years ago. In 1966, Alan Watts wrote in The Book on the Taboo Against Knowing Who You Are:

The startling truth is that our best efforts for civil rights, international peace, population control, conservation of natural resources, and assistance to the starving of the earth–-urgent as they are–-will destroy rather than help if made in the present spirit… Peace can only be made by those who are peaceful, and love can only be shown by those who love. No work of love will flourish out of guilt, fear, or hollowness of heart.

This is why moralistic preaching is such a failure: it breeds only cunning hypocrites–-people sermonized into shame, guilt, or fear, who thereupon force themselves to behave as if they actually loved others, so that their “virtues” are often more destructive, and arouse more resentment, than their “vices.”

After describing the symptoms of this anxious young generation and describing some of the social forces that bred it, the authors wrap up with three chapters that point the way back to mental and social health. These are titled Wiser Kids, Wiser Universities, and Wiser Societies. Each contains practical suggestions to allow kids to develop through the natural mechanism of antifragility. Let them face risk and uncertainty so they can address them on their own terms. “Prepare the child for the road,” the authors say, “not the road for the child.”

1 - Stoicism is generally misunderstood in popular culture. It’s not about grinning and bearing it or suffering in silence. It’s about recognizing thoughts that make life more painful than it needs to be, and turning the mind instead to fruitful practice. The Serenity Prayer states the philosophy most succinctly:

I Married a Dead Man by Cornell Woolrich
Gate 76 Gets a Starred Review from Kirkus
The Woman in White by Wilkie Collins
The Listening Walls by Margaret Millar
Q and A: On Writing
Q and A on Warren Lane
In Memory of O'Neil McGean
Collected Millar: The Master at Her Zenith