Bad Boy was Jim Thompson’s first take at autobiography. Although he was only forty-seven when he wrote it, he had already lived a pretty full life. This volume covers his escapades through age twenty-three. 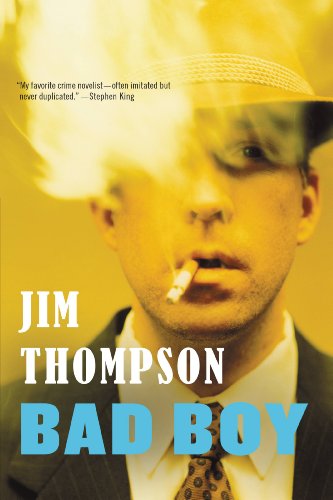 Thompson spent his early youth in Oklahoma, where his father was a county sheriff and one of the most popular men in town. When his father ran for state office on platform that included a commitment to racial equality, he was run out of town.

With his Pop on the run in Mexico, Thompson’s mother took him north to her family in Nebraska. There, Thompson’s grandmother, Ma, forced him to go to religious revivals where the preachers scared him half to death with vivid tales of the hell that awaited him. Ma’s husband, Pa, calmed the six-year-old later with whiskey and bawdy tales.

What seems to stick most in Thompson’s mind from his time in Nebraska is his grandmother’s cooking. “All my life I have been the victim of the inhumane and unjust botching of potentially good food… Nowhere–in hobo jungles, soup kitchens, greasy spoons, labor camps–nowhere, I repeat, have I eaten anything as bad… I think the fates must have provided Ma with a steel-lined stomach as recompense for depriving her of all sense of taste.”

Thompson’s Pop spent two years on the run in Mexico, working hard labor during the day and taking correspondence courses in law and accounting at night. In those two years, he earned a law degree and a certificate in accounting. He returned to Oklahoma and successfully represented himself in the fraud case that his enemies had trumped up to run him out of town.

The family’s name was cleared, but they didn’t want to stick around Oklahoma. They moved to Fort Worth, a town of which the young Oklahoman thought little:

Texans made boast of their insularism; they bragged about such things as never having been outside the state or the fact that the only book in their house was the Bible. Texans did not need to work to improve their characters as Pop was constantly pressing me to do. All Texans were born with perfect characters, and these became pluperfect as their owners drank the unrivaled Texas water, breathed the wondrous Texas air and trod the holy Texas soil.

Texas, it appeared, had formed all but a minuscule part of the Confederacy, and as such had slapped the troops of Sherman silly and sent Grant’s groaning to their graves. Singlehanded–almost, anyway–it had thrashed the bully, North. Then, as a generous though intrinsically meaningless gesture, it had conceded defeat, thus ending the awful bloodshed and preserving the Union.

In Fort Worth, Thompson started ninth grade at age and twelve, and remained a freshman throughout his six year high school career. This sort of character appears often in Thompson’s writing: a man of strong native intelligence who just can’t seem to fit in or get ahead in the normal, acceptable channels of society.

Despite the sorry state of my elementary schooling, I think I might have done passably in the higher grades if I could have put my heart into it. I have almost always managed to do the things I really cared about doing. Similarly, however, and doubtless regrettably, I can do nothing at all if I do not care. And I become uncaring very quickly if I am prodded or driven, or if the people involved are distasteful to me.

During his high school years, Thompson’s father became a speculator in a dozen different businesses, always either about to get rich or about to go broke. The family was under constant financial strain, and Thompson himself had to go to work to help them get by.

He took a job as a bellhop in the city’s fanciest hotel, often starting work just after school let out and finishing just as it was time to return to class. The hotel gave him more of an education than school ever did.

You worked in the hotel, but you worked for the guests. Your earnings, your very job depended upon their good will. So why offend a wealthy drunk by refusing to drink with him? Why snub a lovely and well-heeled widow when it was so easy to please her? And what about these people, anyway? If they were all wrong–these publicly acclaimed models of success and deportment–then who was right?

His grandfather came back into his life during these years, giving the truant schoolboy whiskey and taking him to burlesque shows. You can see he was groomed from an early age to write the kinds of books he wrote.

After six years of ninth grade, Thompson drifted west, to the oil fields, where he lived mostly outdoors, building derricks, tearing them down, guarding drilling equipment, drinking, gambling, and trying honestly but unsuccessfully to stay out of trouble.

Life was rough, but invigorating. “There is always a wind in West Texas. It blows relentlessly, straight off the North Pole in winter, straight out of hell in summer.”

It was during this stint in the oil fields that he came across the real-life model of the psychopathic deputy of The Killer Inside Me.

Thompson was in a bar one night in Big Springs when a brawl broke out. Someone in the crowd threw him through a plate glass window. The local cops, sick of the drunk roughnecks, decided to arrest everyone on the scene. When a particularly rough deputy hauled Thompson into his car, the future writer protested, “But I haven’t done anything! You think I like getting knocked through windows?”

To his surprise, the judge let Thompson off with a fine, due in three days. Outside the courthouse, the deputy let Thompson know that he would hunt him down and collect the money.

Three days later, Thompson was alone on a job forty miles from town at the end of an unmarked, overgrown, virtually impassable road. From his perch a hundred feet up at the top of the derrick, Thompson watched the deranged deputy’s car bumping through the brush, steam spewing from its radiator.

It was a hot day, and Thompson had no water, so the lawman simply waited for hours until he had to come down for a drink. Then the deputy debated aloud as to whether or not he should kill Thompson.

Thompson could see the man was serious, and that he could get away with it. There was not another person for miles in any direction. The scene is reminiscent of Anton Chigurr in Cormac McCarthy’s No Country for Old Men, when the psychopath flips a coin and asks a gas station attendant to call it. Heads he lives, tails he doesn’t. The psychopath doesn’t really care which way it falls, and the victim’s terror comes in part from seeing his killer’s indifference.

Thompson didn’t know whether or not the man would kill him, because the man himself didn’t seem to know. Of all the disturbing characters Thompson had come across in his rough years, this man was the most disturbing.

The deputy ultimately decided, without explanation, to drive Thompson back to town to pay his fine.

Thompson said it took him nearly thirty years to figure out how to convey the chilling terror of this deranged mind to readers. He ultimately did it in The Killer Inside Me, and again in Pop. 1280, which is practically the same book.

Bad Boy ends with the author at age 23 falling victim to the kind of scam-gone-wrong his characters would fall prey to years later in his books. The young Thompson thinks he has all the angles covered in what should be a relatively simple rip-off of some local gangsters. But there’s one angle he doesn’t see, and it’s the one that gets him. Like many of his characters, he’s forced to flee for his life.

Before he flees though, he gets one piece of advice from the editor of a local literary journal. “You write too much from your head,” the man tells him. “Just write what you see.”

At some point, Thompson took that advice, and became one of the great American crime writers of the twentieth century. But he could never have done that if he hadn’t actually seen and lived the stories his books describe.