This book reads like a transcription of talks given before live audiences. The initial chapters read like the joke-filled exhortations of a professional self-help writer, but the book begins to deepen around pages 60-70. De Mello was a Jesuit priest, a trained psychologist, and apparently a devoted student of both Eastern and Western religion. His knowledge is broad and deep, and he has obviously brought great passion to his learning. 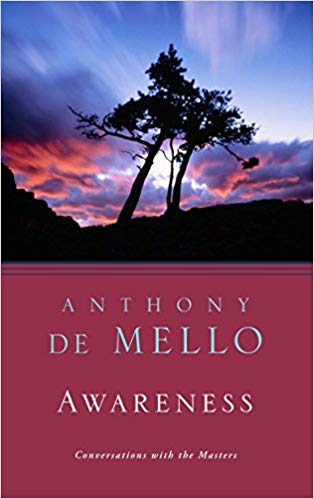 At its core, this book is about the difference between reality and our constructs of reality, most of which we have inherited from our culture, our parents, our teachers, the clergy, and the media. The constructs are all second-hand and almost always false. Our suffering comes from the strife we feel when reality does not conform to our false understanding of how the world should be.

De Mello points out repeatedly that most people are not aware of the constructs they live by. These constructs include the ideas that we must succeed financially, that we must find another person to give us love, that illness and death are personal affronts, that we must adhere to this or that ideal, that our lives must go a certain way. Our false understandings control us through fear and desire, and they do so invisibly until we take the time to see them and root them out.

Even the love we think we feel toward others is often simply an expression of our need for approval and validation. We don’t see this until we look deep inside and discover that we expect to get something in return from the person to whom we think we are giving selflessly.

Our most deeply cherished beliefs are the most dangerous. De Mello offers this excellent observation and parable:

Reality, God, divinity, truth, love are unknowable; that means they cannot be comprehended by the thinking mind. That would set at rest so many questions people have because we’re always living under the illusion that we know. We don’t. We cannot know.

What is scripture, then? It is a hint, a clue, not a description. The fanaticism of one sincere believer who thinks he knows causes more evil than the united efforts of two hundred rogues. It’s terrifying to see what sincere believers will do because they think they know. Wouldn’t it be wonderful if we had a world where everybody said, “We don’t know”?…

A man born blind comes to me and asks, “What is this thing called green?”

How does one describe the color green to one who was born blind? One uses analogies.

So I say, “The color green is something like soft music.”

So a second blind man comes to me and asks, “What is the color green?”

I tell him it’s something like soft satin, very soft and soothing to the touch.

We see this kind of trouble in the world all the time. This is the difficulty of trying to use concepts that people understand to point them toward concepts that they don’t understand. People get attached to the bits they understand, and their understanding ends there, often permanently.

Of course, that’s easier said than done. There’s nothing more terrifying than being asked to accept what you cannot control or understand. Yet with the acceptance comes freedom.

De Mello notes that the few people who really do start to question their understanding of the world do so only after immense suffering. Only after it becomes too painful for them to hold on to their ideas of how the world should be. He notes that there are only two paths for those whose world-view is completely shattered: they become insane, or they become mystics.

De Mello is deeply critical not of religion, but of the way religion is practiced and misunderstood. If people devoted to awareness the time and energy they currently devote to worship, they and the world would be much better off. Toward the end of the book, he gives this excellent parable:

There was a man who invented the art of making fire. He took his tools and went to a tribe in the north, where it was very cold, bitterly cold. He taught the people there to make fire. The people were very interested. He showed them the uses to which they could put fire–they could cook, keep themselves warm, etc. They were grateful that they had learned the art of making fire. But before they could express their gratitude to the man, he disappeared. He wasn’t concerned with getting their recognition or gratitude; he was concerned about their well-being.

He went to another tribe, where he again began to show them the value of his invention. People were interested there, too, a bit too interested for the peace of mind of the priests, who began to notice that this man was drawing crowds and they were losing their popularity. So they decided to do away with him. They poisoned him, crucified him, put it any way you like.

But they were afraid now that people might turn against them, so they were very wise, even wily. Do you know what they did? They had a portrait of the man made and mounted it on the main altar of the temple. The instruments for making fire were placed in front of the portrait, and the people were taught to revere the portrait and to pay reverence to the instruments of fire, which they dutifully did for centuries. The veneration and the worship went on, but there was no fire.

This powerfully describes the problem of many of the world’s religions, where people are taught to direct their worship outward through ritual, rather than inward toward awareness, growth, and change. They have duty without fire, maintaining the symbols without ever discovering the thing the symbols were meant to lead them to.

“These are the more dangerous idol worshippers,” De Mello says. “They use a very subtle substance, the mind, to produce their God.”

True spiritual practice is not a palliative to soothe us in times of trouble. It is the root of how we perceive and experience the world, and it comes from surrender, from accepting that we can simple be without having to know or control or even understand. “Consider the lilies of the field, how they grow,” De Mello reminds us. “They toil not, neither do they spin.”

Vernon Subutex One by Virginie Despentes
Cropper's Cabin by Jim Thompson
The Case of the Velvet Claws
Seven Theories of Religion
The Knife Slipped
They Shoot Horses, Don't They
Pick Up by Charles Willeford
Blood and Money by Thomas Thompson