Nick Bilton’s American Kingpin describes the rise and fall of the darknet market The Silk Road, and its creator, Ross Ulbricht. The book focuses primarily on Ulbricht and a handful of agents from the DEA, FBI, IRS, and Homeland Security who wage a semi-coordinated effort to identify and capture the Silk Road leader, who was known online as the Dread Pirate Roberts. 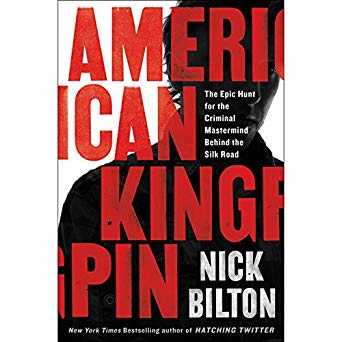 Ulbricht grew up in Austin, Texas, a middle-class kid with strong libertarian leanings. According to Bilton, he had thought about creating an unregulated online marketplace long before the Silk Road went online in 2011, but the technology he needed didn’t exist yet. By 2011, those technologies were widely available. The Tor web browser provided online anonymity, while Bitcoin allowed users to complete purchases without the buyer or seller having to reveal their idenities.

Ulbricht taught himself to code and created a website like eBay that initially sold only psychadelic mushrooms. He posted news of the site’s existence to a few user forums, and from there it grew into something beyond Ulbricht’s wildest dreams. New sellers signed on, peddling cocaine, heroine, LSD, designer drugs, guns, explosives, hacking kits, and human organs for transplant. Much of the book describes Ulbricht’s frantic attempts to keep up with the unstoppable growth of site he created.

Caught off guard by the site’s wild success, Ulbricht enlisted the help of a number of colorful characters to improve security, monitor user forums, and resolve disputes between buyers and sellers.

About six months after launch, Gawker published news of the site’s existence, describing it as the Amazon.com of drugs. This caught the attention of political figures and law enforcement, who vowed to shut the site down and arrest whoever ran it. The problem was that Tor, which had been created by the US government to protect the online anonymity of informants and political dissidents living under repressive regimes, also did a good job hiding the identity of The Dread Pirate Roberts. As Roberts/Ulbricht posted openly about his libertarian views and plans for The Silk Road, no one could figure out who or where he was. If anyone were to unmask him, it could only be due to an error on his part–some misuse of the technology that protected him, or some slip-up in the real world outside of Tor and the dark web.

American Kingpin does an excellent job chronicling how a number of low-level federal law enforcement agents found little clues here and there: a pink pill the in mail in Chicago, a few stray and seemingly unrelated posts in online forums, an envelope full of fake IDs. The government ultimately identified Ulbricht in spite of a poorly coordinated investigation marked by lack of communication and inter-agency turf wars.

In fact, the final identification came almost as a matter of chance, during a conference call when an IRS inspector made an offhand comment about a username Ulbricht had chosen on StackOverflow. Another agent listening in on the call was able to connect that information to a detail in the FBI’s investigation.

Ulbricht’s arrest, which was widely reported at time, is one of the most thrilling moments in contemporary crime, and Bilton does an excellent job recounting the minutes leading up to the unplanned encounter, in which a number of agents had to make a impromptu split-second decisions.

A number of reviewers have criticised Bilton’s writing for its hyperbole and occasional inaccuracies. Part of his job as writer is to flesh out a description of characters he has not met and scenes he did not witness. It’s impossible to do this with one-hundred percent accuracy, so the writer has to work with the facts he has. When the facts are limited, as they are about Ulbricht’s personality and private life, the author must resort to repeating them, and that can wear a little thin.

Bilton also has a bad habit of throwing in unnecessarily heavy-handed foreshadowing. The effect is like lathering cheap ketchup on a fine filet mignon. This story is so fascinating, it doesn’t need any dressing up.

On the plus side, Bilton’s research is thorough, and he does a good job handling a large cast of characters and a great deal of technical information. To get the full impact of a story as complex as this one, you need to keep all the details and players straight. This is where Bilton’s work shines. If you like a good crime read or a good procedural, or if you just want to learn about how online crime works in the twenty-first century, this is an excellent read.

In a Lonely Place by Dorothy B. Hughes
The Moonstone by Wilkie Collins
(Low)life by Charles Farrell
Gate 76 – Coming This Summer
Misreading
You Play the Black and the Red Comes Up by Richard Hallas
The Expressman and the Detective
The Billion Dollar Whale